Advertisement
Home / India / Why humility may be outlandish in Pakistan

Why humility may be outlandish in Pakistan 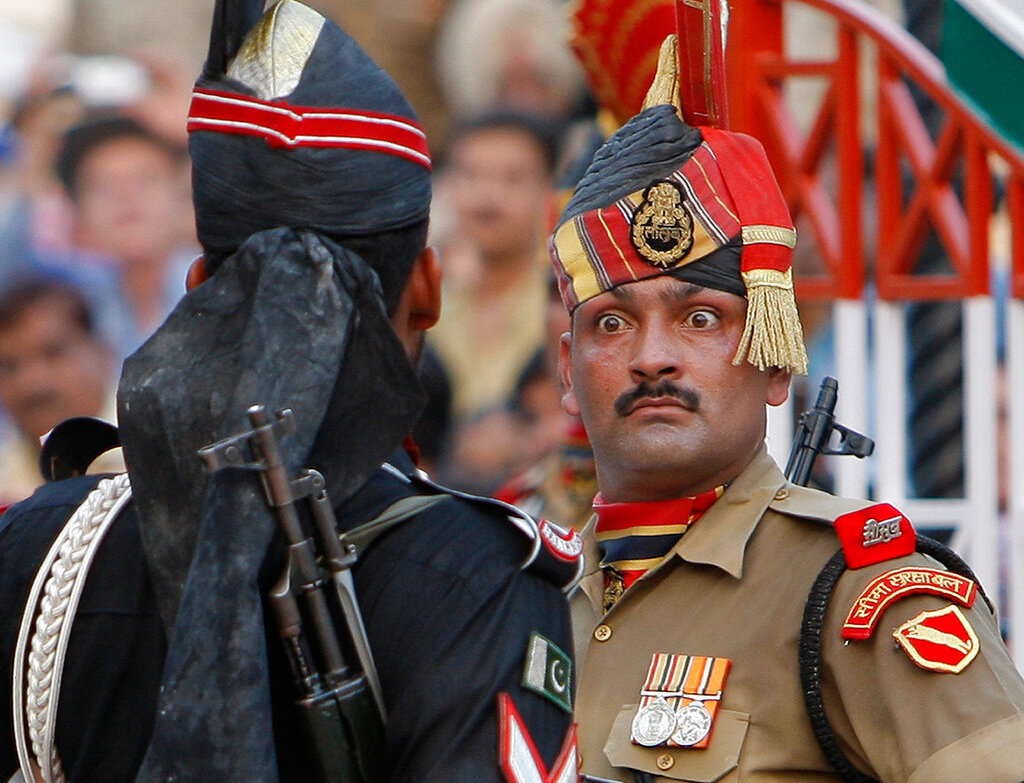 In this July 19, 2009, file photo, an Indian Border Security Force soldier, right, and a Pakistani Rangers soldier face one another at a daily closing ceremony at the Wagah border post near Lahore, Pakistan.
AP
Murtaza Shibli   |   Published 17.03.19, 07:49 PM

Even before there was any ominous sign that the war-torn anxieties were tranquillising, Pakistan’s information minister, Fawad Chaudhry, was preparing to steal the limelight for his leader.

As soon as Wing Commander Abhinandan Varthaman’s carefully choreographed live journey to freedom faded from the TV screens, there was a sudden clamour to characterise the event as the greatest peace gesture of all time.

Soon Chaudhry, whose job security has remained a subject of constant speculation for the past several weeks, submitted a hastily composed resolution in the lower house of the National Assembly. The draft stated the Prime Minister “deserves the Nobel Peace Prize” for releasing Wing Commander Abhinandan that has de-escalated the hostility between the rivals.

Earlier, another parliamentarian and minister for water resources, Faisal Vawda, was so enamoured of the charisma of his boss Imran Khan that, during a live debate, he made a statement that has earned him censure and threats from the people of otherworldly countenance.

The Muttahida Majlis-e-Amal (MMA) tried to bring a parliamentary resolution to condemn what they called blasphemy and get him officially designated as an infidel, a charge that could prove fatal and without any recourse to relief from the courts.

In 2002, the MMA, in its previous iteration, was forged out of diametrically opposite religious groups with active assistance from the military dictator Gen. Pervez Musharraf. This helped them gain power in Khyber Pakhtunkhwa province and also earned them the sobriquet of the Mullah Military Alliance.

To protest the official refusal to move a blasphemy motion, the MMA parliamentarians, in the process, got accused of creating their own desecration by holding a protest in form of a prayer that amusingly turned out to be misdirected.

Maulana Asad Mehmood, son of a famous religious politician Maulana Fazlur Rahman, led the maghrib or evening prayer inside the National Assembly hall. In the spiritual rush to register dissent, the direction of the prayer, an obligatory religious norm was missed,

fuelling accusations of impropriety. Prof. Ahsan Iqbal, a leading Opposition leader from the PML-N and former interior minister, had also attended the prayer of protest. He told me the “direction was marginally wrong due to the circular design of the building” but was within “the permissible 45-degree range”.

Unlike his predecessors, Imran Khan has demonstrated a peculiar strength of character to discount many opportunities of wallowing in self-serving pantomimes. His timely tweet that he did not deserve a Nobel Prize almost ended the debate, discouraging many within the ranks who would otherwise indulge in such tawdry manoeuvres to please their boss in the hope of advancing their careers.

But the past is resplendent with the fickleness of the rulers that any display of humility comes across as outlandish. Not so long ago, anything that had the potential to massage the ego of Mian Sahib, an affable title for Nawaz Sharif, was accorded currency.

There is a hospital each named after Nawaz Sharif and his younger brother Shahbaz in Lahore; a kidney hospital in Swat and a medical college in Gujrat is designated with the elder Sharif’s moniker. In Rawalpindi, one public space is called the Nawaz Sharif park. There are more colleges, schools and hospitals named after one or the other Sharif.

During Shahbaz Sharif’s tenure as the chief minister of Punjab, government-funded toilets in Sheikhupura district appeared with signboards carrying his headshot to announce the male gender of certain cubicles.

Imran Khan has his critics as well, including from within the family. His one-time close associate and brother-in-law, Hafeezullah Niazi, wants me to believe that his former leader is full of hot air and that he cannot move a muscle without the approval of the all-powerful military. Therefore, Imran Khan cannot be given any credit for Abhinandan’s release, a position also advanced by his former wife Reham Khan.

While Niazi has been my friend for a long time, I know a little about Reham Khan, mostly thanks to some of our common acquaintances. But there is no doubt that both of them carry heavy personal grudges. Reham’s bitterness is more

profound. She had pulled every trick off her sleeve to first gain Imran Khan’s attention and then his heart. Sadly, her marriage was unworthy of an anniversary, and even during the short conjugal spell, she remained mostly estranged and apart.

This did not, however, stop former Mrs. Khan from scribbling a treatise that I once described the Pakistani version of the Koka Shastra. Mubeen Rashid, Reham’s old-time friend, who was involved in the initial phase of the book, told me at the time that it was too profane to be published, and, therefore, he had to withdraw from the project.

The manuscript could only be self-published but failed to create the intended damage to her old flame’s electoral prospects. Now there are suggestions that a new and more “revealing” book might be coming. One would assume it might be laden with graphic details and perhaps aided with some graphics as well, about some missed and actual (surgical) strikes.