When police went ‘hunting’ in hostels of AMU

Student recounts night of ‘fear, grievance and anguish’ in university 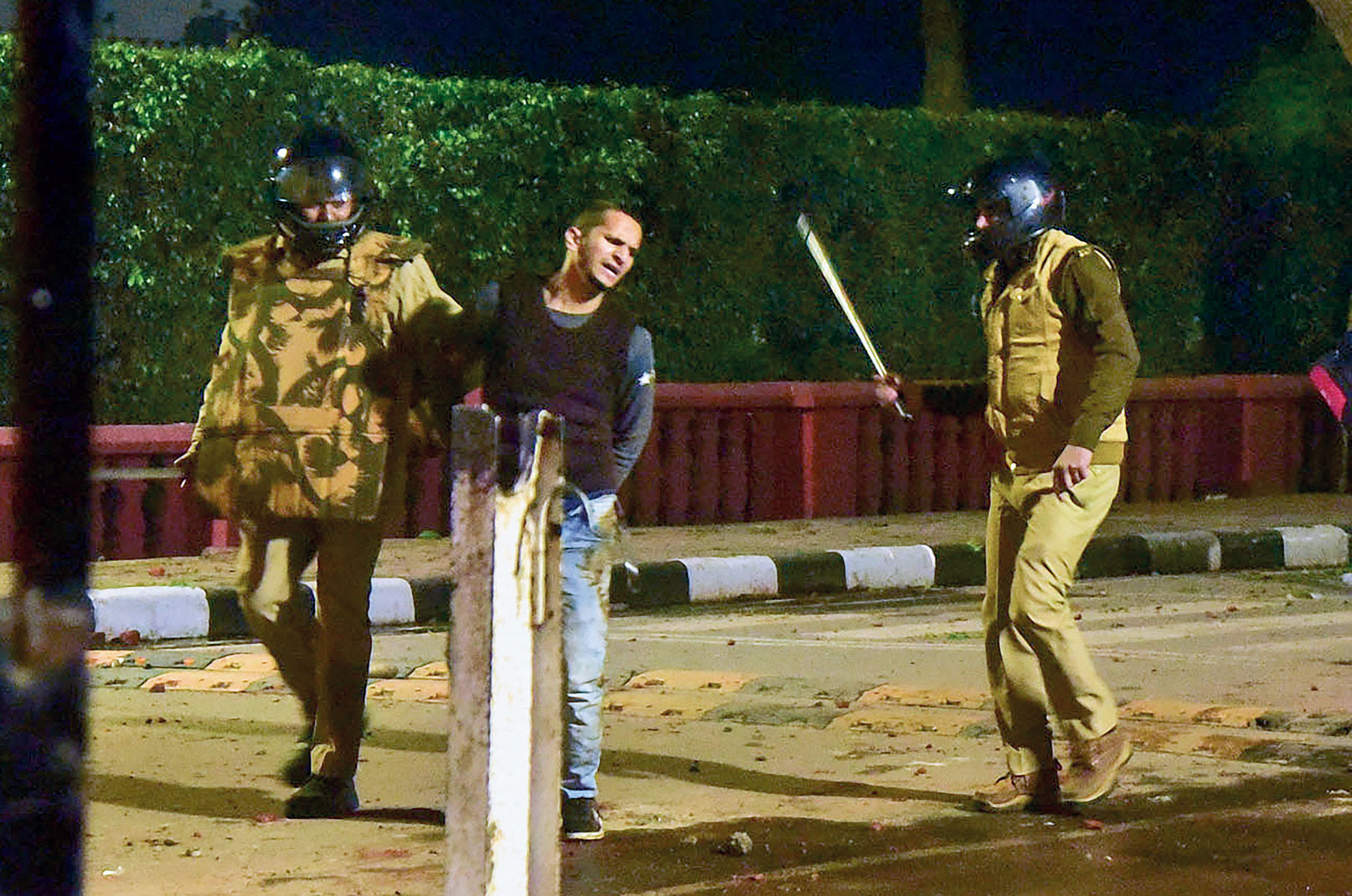 A policeman leads a student away while another brandishes a baton after clashes on the Aligarh Muslim University campus on Sunday.
(PTI)
Tauhid Khan   |   Aligarh   |   Published 16.12.19, 09:09 PM

The happenings of the evening of December 15 started with a call for a general body meeting of Aligarh Muslim University’s students and organisations on the grounds before the Maulana Azad library at 6pm. The meeting was called for a collective response and opposition to the Citizenship (Amendment) Act. It was also in solidarity with the students of Jamia Millia Islamia.

The gathering was emotionally charged about the goings-on in Jamia. Nevertheless, the 1,000-something crowd marched peacefully towards the main campus gate, or Bab-e-Syed, while shouting slogans such as “CAB nahin chalegi”, “AMU-Jamia bhai bhai” and “Godi media hai hai”.

The gate had heavy security cover on the outside. It was swiftly locked from inside. Thereafter, the students broke the gate — in part — and a few of them landed on the other side where the security personnel were and ended up being brutally lathi-charged and suffered serious injuries.

As the students kept up the sloganeering, the cops as well as Rapid Action Force personnel barged in and assaulted any student who came in the way.

There was chaos as the crowd started running back towards the university. What followed for the next half an hour was something like a game of kabaddi, with the police recklessly beating back the advancing students.

By 8.30pm, reportedly after securing permission from the registrar, Abdul Hamid, the police entered deeper into the campus. This time they used tear gas and rubber pellets to intimidate the students.

The police started to vandalise the parked vehicles, broke the rear lights and headlamps of bikes and one or two cars. The students retaliated by throwing stones. The police even entered the guesthouses near the main gate where many of the students had taken refuge.

It didn’t stop there. The police went hunting into the boys’ hostels — Morison Court, Aftab Hostel, Macdonald’s Hostel — and one of the rooms of Morison Court even caught fire.

Students huddled together in the common rooms and terraces of the hostels. The overall atmosphere was one of fear, grievance and anguish. It was about 10pm.

Around 10.30, a notice was circulated announcing the termination of the academic session and the postponement of exams. The students spent the rest of the night in fear of more raids as they planned their impending return to the various parts of the country they called home.

At midnight, Internet services were suspended. The night was spent awake. On Monday morning, we stepped outside the campus in search of breakfast only to find police vans and downed shutters.

Even those handful of places that were open were forced to shut down by the police the moment we approached them. While WhatsApp and email remained inaccessible, the phone kept ringing constantly. Well-wishers were calling to warn us to stay off the streets and the city, where there was apparently a curfew.

Tauhid Khan is a first-year MA English literature student at Aligarh Muslim University. He gave this account over the phone