Advertisement
Home / India / What even the boss of Google can't do

What even the boss of Google can't do

Google CEO Sundar Pichai returned to IIT Kharagpur today to a rockstar-like reception from over 3,500 students and teachers, 23 years after he had left the campus to pursue his master's at Stanford University in the US. 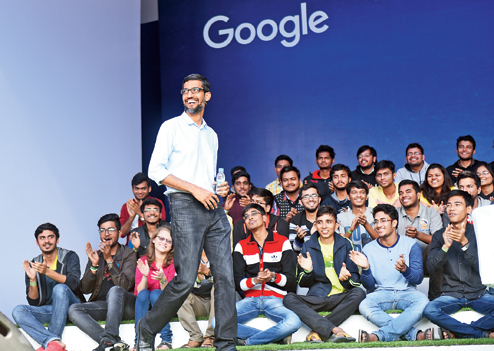 Kharagpur, Jan. 5: Google CEO Sundar Pichai returned to IIT Kharagpur today to a rockstar-like reception from over 3,500 students and teachers, 23 years after he had left the campus to pursue his master's at Stanford University in the US.

The 1993 BTech topper in metallurgical and materials engineering, P. Sundarajan, as the Google big shot was known then, regaled an overflowing open-air auditorium with stories from his life on the Kharagpur campus and beyond.

Before he got started, there was a statutory warning from an emcee: "Don't throw CVs at him."

How it feels to be back: The last time I left, I was making my way to the train station. I was pretty sad to be leaving college. It was an amazing four years. I haven't been back since then, so it's extremely nostalgic. I had a chance to come (today) and go back and see the hostel and the wing in Nehru Hall where I stayed.

(As two students hoot in appreciation) I can see... two Nehru-ites up there. It's been phenomenal to come back.

Mess food: The mess staff were great but when we joined, people would ask us to guess whether it's sambar or dal.

(When the moderator asks the students whether that is still true, thousands of voices shout, "Yes".) That was quite an experience. They were great folks and we are glad that they fed us for four years.

Abey saale: I came from Chennai. I learnt Hindi in school but never spoke it much. Just listening to how people were speaking, I just thought you address people this way. So one day (a couple of weeks after he had joined IIT), there was someone in the mess and I had to call him and I called him "abey saale". Next thing I know, the folks in the mess were quite upset. I think they temporarily closed down the mess... for that day.

Whose poster he had on his hostel room wall: I don't want to comment on posters. What happens in a college dorm stays there!

And the big ask: As the CEO of Google, can he change the Google doodle to the IIT KGP building for a day: (Gets phone out of pocket and pretends to use it) Gonna send a message to the team. (Pause) Don't get too excited. The good news is Google is set up in a way so that even if I send that email, they would not do it.

Here's the reason why: we have built an organisation with strong ideals and values on when we show doodles, for what occasions.

And it's less about what I want to happen. KGP definitely deserves celebrations. Look forward to doing it in the most thoughtful way possible.