Advertisement
Home / India / We will deliver on the promise of job creation: Tejashwi Yadav
'We do not know how to do publicity for ourselves'

We will deliver on the promise of job creation: Tejashwi Yadav

'There are so many vacant posts in government departments. We will begin by filling these up' 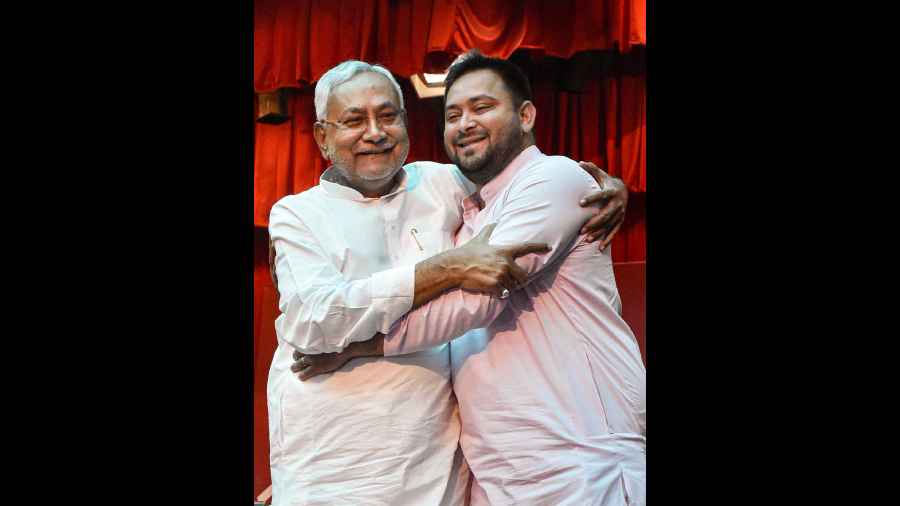 Bihar Deputy Chief Minister Tejashwi Yadav on Thursday cocked a snook at the Narendra Modi government at the Centre, saying he was willing to offer his residence for setting up offices of ED and CBI, agencies which have often faced allegations of misuse for political vendetta.

The young RJD leader, who has struck gold with his former boss Nitish Kumar's exit from the BJP-led coalition, also reaffirmed his commitment to deliver on the promise of providing 10 lakh jobs that had fetched his party lots of votes in the last assembly polls but not enough to muster a majority.

"ED and CBI are welcome to set up their offices inside my residence. If even this does not bring Shanti (peace), I cannot help it, Yadav quipped when asked whether fear of these agencies haunted him, since the new government was formed after stripping the BJP of power and his name figured in a money laundering case.

I did not fear these agencies even during my first tenure as deputy CM, when I was much younger. I used to fight with the Centre for Bihar interests. I have, since, matured, having served as leader of the opposition and steered the party campaign in last assembly elections when my father was not available," said the younger son of RJD supremo Lalu Prasad.

The 33-year-old leader said that the case lodged against him pertained to a time when he was a kid", pursuing his passion for cricket.

If I had committed any crime why no action has been taken so far,"asked Yadav.

In an interview to a news channel, Yadav said Chief Minister Nitish Kumar, with whom he took oath on the day before, has issued instructions to the officials concerned to accord top priority to job creation.

There are so many vacant posts in government departments. We will begin by filling these up, he said.

It was not just a promise but acknowledgement of the crying need for employment generation in Bihar. We cannot think of going back on it since people had showered their blessings in the elections in which the RJD-led alliance polled only about 12,000 votes less, across all 243 assembly seats, than the NDA, he recalled.

The RJD heir apparent also blamed the BJP for the negative perception about his party which is often accused of the use of muscle power, resulting in bad law and order.

The problem is we do not know how to do publicity for ourselves. The BJP, led by Prime Minister Narendra Modi, are adept at publicity. But the people will see through their allegations once they get to see the performance of our government, said Yadav.

Expressing agreement with the contention of the chief minister's JD(U) that the BJP was trying to split it despite being an alliance partner, the RJD leader said Nitish Kumar ji was under so much pressure ..they (BJP) were trying to do in Bihar what they have done in all states. Intimidate or lure with money .

While sharing power, the BJP did not accommodate even small requests like central status for Patna University, which Kumar had urged the PM to confer in public view, he alleged.

Asked about BJP leaders raking up past acrimony between Kumar and his father Lalu Prasad, he shot back and why did they join hands with the JD(U) in 2017 after so much venom was spewed by them against Nitish Kumar ji? Even the prime minister had made the infamous DNA jibe .

Was it not the prime Minister, again, who had recently called Nitish Kumar ji a true socialist? He should be happy that the CM is now heading a government in collaboration with ideological peers, Yadav remarked, tongue in cheek.

He rubbished speculations of early collapse of the government because of internal contradictions.

We all are socialists, at heart. We may fight, but we will stay together, Yadav asserted.

The term Mahagathbandhan came into being when Nitish Kumar ji had joined hands with Lalu Prasad ji. We are very happy that he is back with us, said the leader, who had made his debut in 2015 assembly polls and was made the deputy CM of the Grand Alliance government.