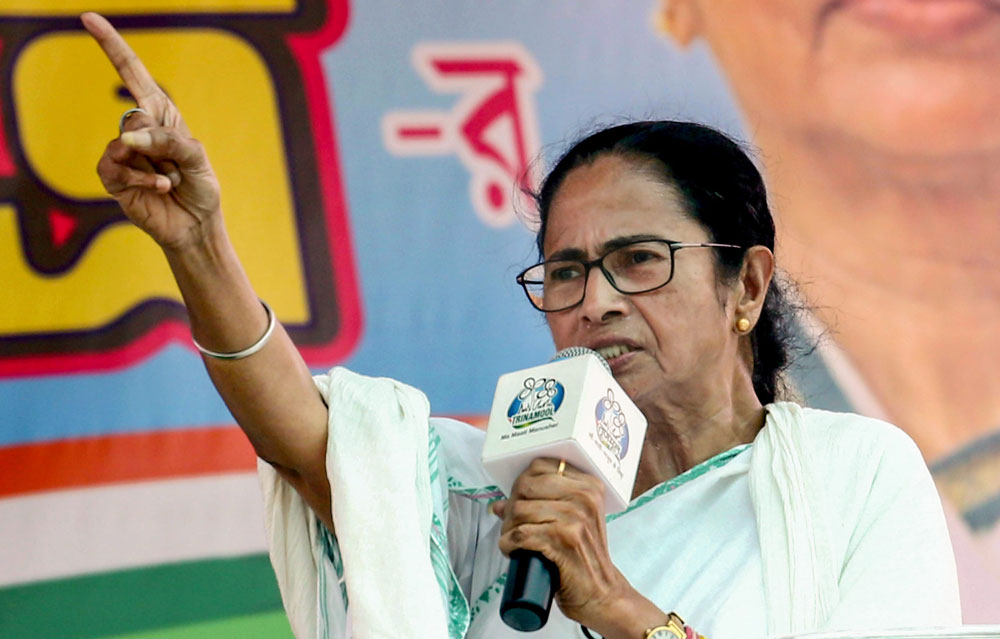 Mamata Banerjee on Monday said she was unable to receive Prime Minister Narendra Modi’s calls made to her office as she was then camping at Kharagpur to closely monitor the possible advent of cyclone Fani in the state.

Modi has said that he had called the Bengal chief minister twice on Saturday but his calls were not returned.

He had called up governor Keshari Nath Tripathi to inquire about the ground situation in the wake of the cyclone on Saturday, prompting Trinamul to accuse Modi of trying to bypass the chief minister and not respecting the country's federal structure.

Mamata, while addressing a rally at Gopiballavpur sub-division of Jhargram, said: “I was in Kharagpur monitoring the cyclone but the Prime Minister’s calls were made to my office (in Calcutta); so, I could not respond to them.”

She said Modi had called her for a meeting at Kalaikunda, where he landed for an election meeting after touring the cyclone-battered Odisha.

“Are we his servants that we have to go wherever he beckons? Now he will allege that I have not responded and have not shown cooperation.

“My (election) meeting at Jhargram today was scheduled. Elections are on in Bengal, while it is over in Odisha. Why should I share dais with an expiry Prime Minister during elections?”

Modi had raised the issue at a rally at Tamluk in East Midnapore district earlier in the day.

“She is so arrogant that she didn't speak to me.... Speedbreaker Didi is more interested in doing politics,” he said.

Modi said he had wanted to speak to the state officials to take stock of the situation. “But she didn't allow that to happen. The people of Bengal are getting affected because of her politics. But I want to assure you all that the central government stands with the people of Bengal.

The Trinamul chief said Modi should get the “right lesson” in the ongoing Lok Sabha polls. The fifth phase of voting is being held on Monday.

“(Modi) Don't look at Bengal. You are going to lose for sure,” she said.

Continuing her attack against Modi, Mamata, who has been among his severest critics, said: “We don’t want a government that tortures under Modi. We want peace not war... First you (Modi) control Delhi. We will form the united India government at the Centre and there will be an effort to build a new India”.

Referring to the BJP’s “achhe din” slogan, she said: “Have you all got Rs 15 lakh in your bank accounts as promised by Modi? Go and tell Narendra Modi that he has been lying. The prices of petrol, gas, diesel and other commodities are all rising. Is this the achhe din Modi wanted?”

Mamata added: “Earlier, Modi used to say that he was a chaiwala. Now he has become a chowkidar (security guard)?”

She urged the people not to get “misled” by the BJP. “They are dangerous.”