A video has surfaced on social media in which VHP leaders in the presence of BJP Rajya Sabha member Vijay Goel are heard warning Muslims that they must learn to live peacefully with Hindus.

In the video clip, Goel is not seen making any speech at the event, but is seen hovering near the stage of the public meeting at Lal Kuan, which is in Chandni Chowk, Old Delhi. Phone calls to Goel went unanswered.

Jain, clad in white in the video, was heard making a point to Muslims. He said: “Even your ancestors were Hindus. They were not Babur, Aurangzeb. They were Ram, Krishna, A.P.J. Abdul Kalam, Ras Khan. If you follow Babur’s ways, it won’t be right.... The country will stand with those who will stand by the country. And those who don’t stand with the Hindu and country, they will just be kicked out, just like those who have been kicked out of Parliament.'

One of the saffron clad me with Jain said: 'Remember, even the police, the army will not be able to do anything. Because the country’s army’s strength is 20 lakh. We are 90 crore. So do not be under any delusion, do not threaten us. Live peacefully.”

When this website spoke to Jain, he accepted that the other men on stage with him were VHP leaders, but did not identify them.

When he was told about the viral video, he said: “I am sure you would not have not asked this question to any Muslim leader.... Under what law was the temple vandalised?' he asked. He also said that recently a narrative has been made around mob lynchings, 'which was based on half-truths'. 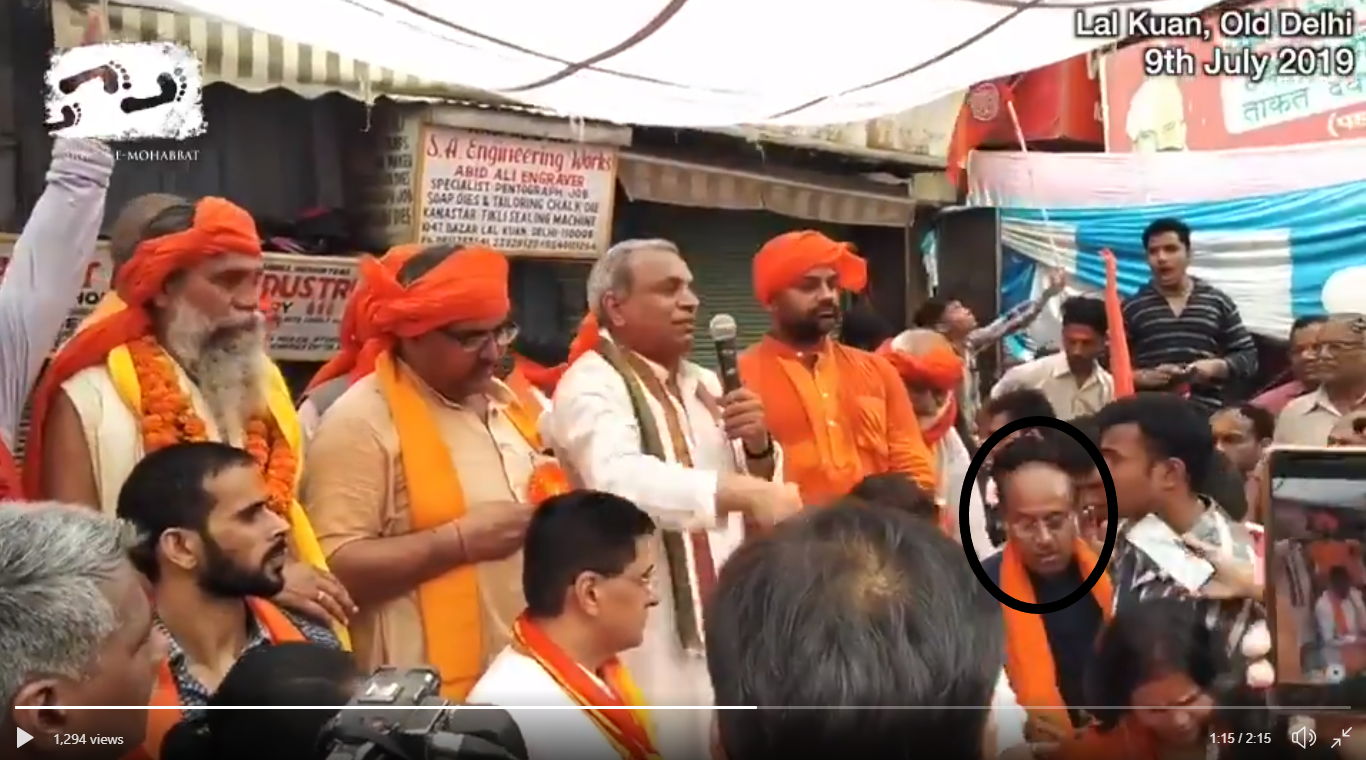 (In circle) BJP MP Vijay Goel at the VHP meeting in Old Delhi on July 9.
Video grab from Twitter

Surendra Jain, a VHP joint general secretary who spoke at the public meeting, responded to the website's queries.

The meeting in Old Delhi was held on July 9 and its purpose was to reinstall idols in a temple which had allegedly been desecrated. The suspicion fell on some local Muslim youths and three FIRs were lodged at Hauz Qazi police station against the June 30 alleged temple desecration.

It was on this occasion of re-establishing the idols that Jain and two saffron-clad men spoke at the VHP organised Vishal Shobha Yatra in Old Delhi on July 9.

A local police officer on the condition of anonymity said the Hindu rights organisation had informed the police about the event in advance and had permission for it. He said no complaint had been made by anyone against the speech.