From next year, admissions to all 42 central universities in the country will go online - starting with filling of application forms to payment of fees after selection. 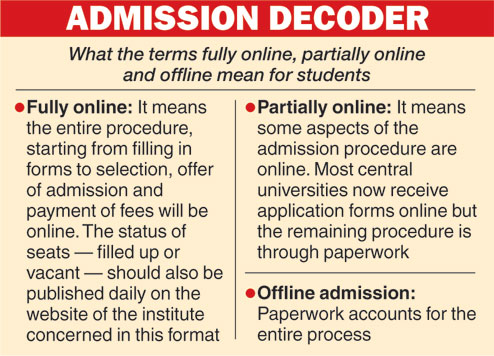 New Delhi, Dec. 22: From next year, admissions to all 42 central universities in the country will go online - starting with filling of application forms to payment of fees after selection.

The letter said the idea was to "promote enhanced transparency" and "facilitate informed choices for students".

Several teachers, however, cautioned that the paper system must continue till every student had access to the Net or was comfortable with online procedures.

Oberoi's letter said: "As part of a series of measures to promote enhanced transparency and improving efficiency and to facilitate informed choices for students, the admission process in all Central Universities will be made on-line from (the) next academic session."

The letter did not clarify if offline - or paper-based - admissions would be completely discontinued with from next year. Some institutions now conduct both computer-based and paper-based entrance exams.

The ministry has directed the UGC to inform all the central universities about its decision and collate information about how they were conducting admissions now. Some, like Delhi University, have introduced online filing of forms, while Assam University has gone a step further with online processing of data and automatic promotion of waitlisted candidates in case students above them don't enrol.

Sources said the ministry would hold a meeting next month to review the progress of online admissions. Asked how many institutions were still carrying out entirely paper-based admissions, UGC sources said they didn't have the exact figures.

Former Delhi University Teachers' Association president Saswati Majumdar said the "offline system should continue alongside the online process" till every student had access to the Net.

Professor Abha Dev Habib, a DU executive council member, questioned the ministry's directive. "Why should such a directive come from the government? Every university has its own bodies to take need-based decisions. This top-down approach to homogenise the admission system is against an institution's autonomy," she said.

B.N. Mishra, promoter of the e-learning company Entranceindia.Com, said around 10 per cent of the applications for the JEE-Main and the All India Pre-Medical Test (AIPMT) are rejected every year because of mistakes in filling the forms online.

Mishra has written to the HRD ministry seeking a provision for allowing students to fill up forms offline. "How many know how to make payments through debit or credit cards?" Mishra asked.

But Ravi Bhardwaj, a lawyer who handles education-related disputes, said the online move would help students. "Instead of visiting universities for application forms and information, a student can do everything from home," Bhardwaj said. "Also, display of merit lists online ensures transparency."#