Online darshan, LED screens for aarti and other measures already in practice at Tirupati Balaji temple could be replicated here for better management 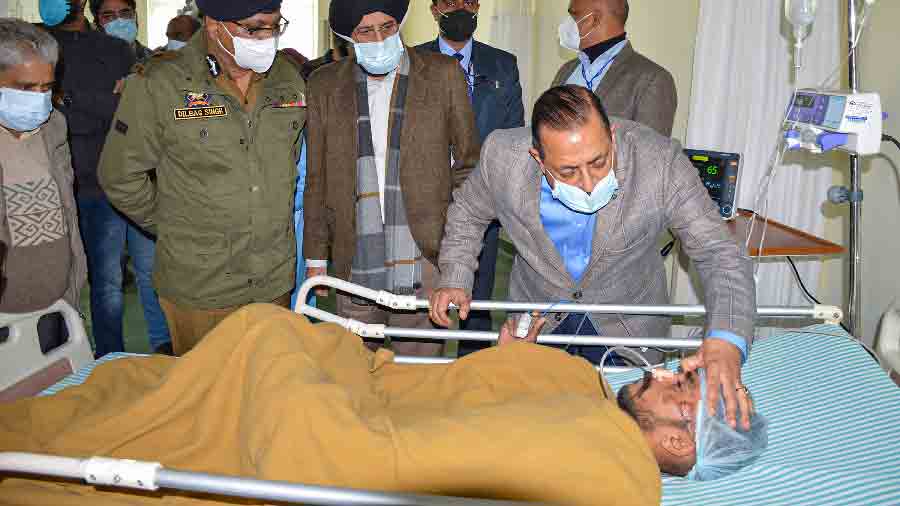 Innovative measures are required to deal with the trend of youngsters visiting the Vaishno Devi shrine on New Year, Union minister Jitendra Singh said on Saturday, as he arrived here to take stock of the situation following a stampede that left 12 devotees dead.

The minister of state in the Prime Minister's Office visited the cave shrine atop the Trikuta hills in Reasi district of Jammu and Kashmir and also met injured devotees undergoing treatment at the Shri Mata Vaishno Devi Narayana Superspeciality Hospital at Kakriyal.

At least 12 people, including two women, died and over a dozen were injured in the stampede at the shrine in the early hours of Saturday triggered by a heavy rush of devotees.

"A probe has been ordered by the (J&K) government. Police have taken adequate measures, but we will discuss what else can be done (for safety of pilgrims)," the minister told reporters at the hospital after inquiring about the health of the injured devotees.

Jitendra Singh, who was accompanied by Jammu & Kashmir Director General of Police Dilbag Singh, said in the past few years, a trend has started with a large number of young people preferring to come for the Yatra on the first day of the year.

"Traditionally, devotees used to come on festival days like Navratras, Dussehra and Deepavali. But this is a new trend, and we have to take measures accordingly," he said, adding, "We will talk about innovation and technology to find some solution to this."

The minister said online 'darshan', LED screens for 'Aarti' (prayers) and other similar measures already in practice at the Tirupati Balaji temple could be replicated here for better management.

"When there is heavy rush and people are eager to visit and take part in the prayers on the same day of the New Year, such measures could be very useful," he said, and suggested a sustained campaign and counselling for pilgrims.

Singh said sometimes, the administration faces problems when there is much enthusiasm among devotees, and there is also a border line for the restrictions.

Expressing happiness that the injured pilgrims are now stable, the minister said six people are admitted in the intensive care unit and four in general ward.

"Six of them are ready to get discharged, and the condition of the remaining injured is also stable. This is the happy part of this tragic incident, and Prime Minister Narendra Modi is monitoring the situation and is in regular touch with officers concerned," Singh said.

Earlier, the minister interacted with the injured pilgrims and was also briefed by doctors, officials said.

The DGP said most of the deaths took place because of suffocation and people running over each other.

"Most of the injuries are also due to the same reason," he said, adding the crowd was managed very well by the people deployed on the ground.