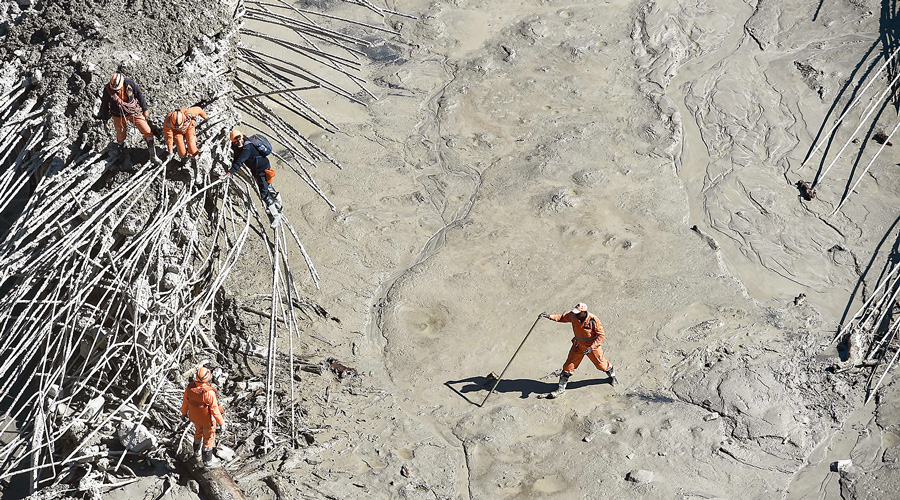 Rescue work in Uttarakhand’s Chamoli district, where 25 to 35 people are feared trapped in a tunnel, had to be suspended for four hours on Thursday when dark-coloured ice and muddy water came hurtling down the Rishi Ganga and raised the water level in the river’s downstream.

When work resumed around 6pm, the rescue workers had to again abort the operation after proceeding only around 2 metres into the Niti Valley tunnel as they encountered a thick steel mesh and a concrete structure.

The team has been able to move around 102 metres into the tunnel by clearing debris. The National Thermal Power Corporation (NTPC) workers feared trapped since Sunday’s flash flood are believed to be stuck around 180 metres inside.

Eyewitnesses said a huge mass of black ice and water mixed with mud and sludge began flowing down the Nanda Devi mountain in the upper Rishi Ganga catchment area around 2pm and eventually reached downstream, raising the water level in the river. The rescue workers, alerted by their colleagues, scrambled out of the tunnel, whose mouth is located on the bank of the river, with their machines.

“We had never seen such a spectacle before. Black-coloured ice and water came down the river with great force. Sunday’s calamity seems to have played havoc with the Rishi Ganga river. This is beyond our imagination. Scientists must study today’s incident against the backdrop of the flash flood of Sunday,” said Bhawan Singh Rana, the panchayat chief of Raini, the most affected village where a hydro-power project has been destroyed.

“The water level goes up in the hilly rivers when there is rainfall but today was a sunny day. There must be some lakes on the top of the mountain and they are collapsing for some reason,” Rana said.

Thirty-four bodies — of labourers working on two hydropower projects and villagers from nearby areas in Chamoli district — had been recovered by Wednesday evening but 170 people were still missing, state authorities said.

Teams from the army and the Indo-Tibetan Border Police (ITBP) had to stall the rescue work inside the tunnel on Wednesday too because of flow-back by a “sludge” of rocks, slush and water.

The work had resumed on Thursday around 11am but had to be stopped again at 2pm when the river water level rose. When the men entered the tunnel again around 6pm their path was obstructed by a thick steel mesh and a concrete structure.

“The debris could not be cleaned because of the obstruction,” a government source said.

Ashok Kumar, the director-general of police of Uttarakhand, said: “There are adverse situations preventing us from continuing the rescue work. We are considering the option of drilling from above to enter the tunnel.”

He said there had been no communication with those who might be trapped inside. “Vertical drilling looks like an important option for us,” said Aparna Kumar, deputy inspector-general of the ITBP who is camping in the area since Sunday. She said the NTPC believed that its workers were trapped near the T-point at the end of the first tunnel, which is straight and 180 metres long.