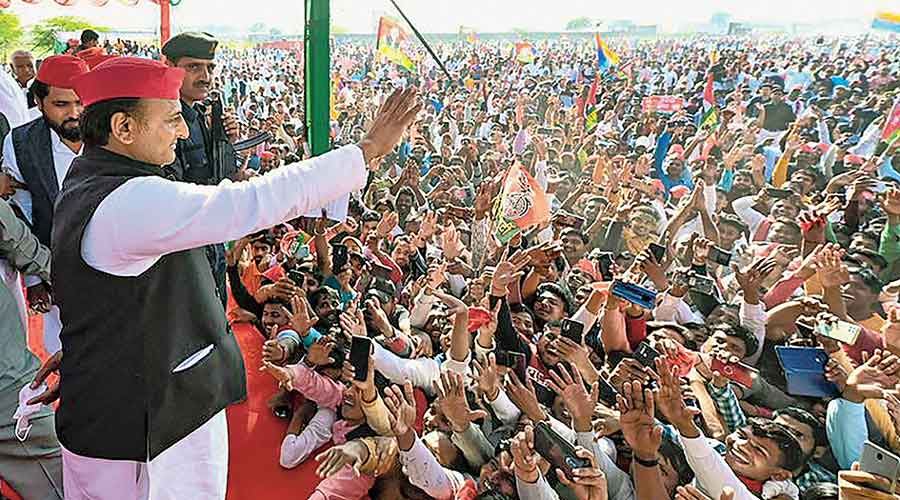 There is a general feeling that Akhilesh Yadav has been a slow mover as the Uttar Pradesh elections enter the fourth phase.

The Samajwadi Party chief appears to have risen to the occasion late into the campaign by highlighting burning issues such as the human cost of the second Covid wave and the plight of women only before the fourth phase as the BJP encircled him with allegations of “goonda raj” and communal jibes.

As Lucknow gears up to vote on Wednesday along with nine other districts of central Uttar Pradesh in the fourth leg of the seven-phase elections, many are asking why Akhilesh did not take up earlier the issues that could have given his campaign a sharper impetus.

“I heard at least 15 election speeches of the Samajwadi president in the first three phases and found them repetitive. He said Baba Mukhya Mantri (chief minister Yogi Adityanath) didn’t know how to use a smartphone and claimed that the bigger the BJP leader, the bigger liar he was. While targeting Prime Minister Narendra Modi, Akhilesh kept repeating in his speeches that the biggest leader of the BJP speaks the biggest lies,” said Mohammad Sohail, an executive with a private firm.

Sohail was holding forth at a tea stall in front of the VVIP Guesthouse in Lucknow, where political observers and perception makers gather every day.

The hotspot is a stone’s throw from the offices of the BJP, SP, BSP and the Congress, besides the state secretariat.

“Mamata Banerjee held a news conference at the SP office in Lucknow on February 8 and reminded the people how bodies had floated in the Ganga during the second wave of Covid-19 in May 2021 and the government left the people on their own. She said daughters were unsafe in BJP rule and reminded voters that Modi’s claim of free Covid vaccines was a farce as the people had paid for them in the form of income tax and GST.

“She repeatedly asked Yogi and Modi to apologise instead of seeking votes. Akhilesh began talking about Covid deaths only on Tuesday, when we are entering the fourth phase of polling. Why did he wait so long?” said Sohail, who travels extensively on work.

Akhilesh raised the issue of floating bodies in the Ganga at a rally in Allahabad’s Sirathu on Tuesday and asked the people: “Do you remember or not how bodies were floating in the Ganga in Varanasi and Ghazipur? These people (the BJP) are against the Constitution. You have to vote this time to save democracy.”

He, however, is yet to take the Adityanath government on over its dismal record on women’s safety, not speaking on the Hathras and Unnao atrocities in his rallies.

Many Samajwadi workers believe such a “soft campaign” won’t be enough to counter the BJP as it intensifies its polarisation game as voting moves into central and east Uttar Pradesh.

Alok Singh, an SP worker, said: “You see the campaign — Akhilesh is like a slow-motion picture. He mostly remained silent on the failures and highhandedness of the Yogi and Modi governments. Yogi, Modi and other BJP campaigners are like a fast movie. They call the SP a party of goondas, rioters and terrorists to strike fear in the minds of voters. They are trying to polarise Hindus in the name of graveyards, hijab and now the verdict in the 2008 Ahmedabad blasts case. The other problem is that Akhilesh didn’t think twice before annoying party leaders who wanted tickets.”

Asked last week about the anger among sections in his party, Akhilesh had laughed and said: “What can I do?”

The BJP, on the other hand, has been using its tried-and-tested campaign tactic to the hilt — dividing voters along sectarian lines.

Adityanath has been saying that Akhilesh as chief minister between 2012 and 2017 had only constructed boundary walls of graveyards in the name of development. BJP leaders, including Union home minister Amit Shah, have opposed the hijab on college campuses. Modi has called Akhilesh a friend of terrorists because the son of an SP leader from Azamgarh is among the 38 handed the death sentence in connection with the Ahmedabad serial blasts.

Shadab Ahmad, father of the convicted Mohammad Saif, told The Telegraph: “Since the BJP has performed badly in the first two phases of elections in west Uttar Pradesh, it has come out with something new to polarise the majority voters.”

Amir Rashadi, an independent politician of Azamgarh, said the BJP was weaving a “sensational communal narrative” around the Ahmedabad verdict.

“As the elections move from west to central and east Uttar Pradesh, the BJP appears to be intensifying its communal agenda. This trick didn’t work in west Uttar Pradesh because of the anger of the farmers, the alliance of the Rashtriya Lok Dal with the SP and the substantial Muslim population there,” Alok, the SP worker, said.

Of the 59 seats going to the polls on Wednesday, the BJP had won 51 in 2017. The SP had bagged four while the Congress and the BSP had won two each. Of the nine seats in Lucknow, the BJP had pocketed eight while the SP had won one.

The general view in Lucknow is that the SP candidates are giving a good fight to the BJP nominees in most seats.

Puja Shukla, an anti-CAA protester who was in jail with the Congress’s Sadaf Jafar, is the SP nominee for Lucknow North against sitting BJP MLA Neeraj Bora. Sources said she would receive the support of Brahmins as well as Muslims and the OBC Yadavs.

Puja has been reminding people about the Adityanath government’s Covid mismanagement and the poor law-and-order situation.

However, Bora, a prosperous businessman, has more resources.

Arshad Khan, a student of Lucknow University, said: “Brijesh Pathak, law minister in the Adityanath government, ran away from Lucknow Central to Lucknow Cant for fear of losing to the SP’s Ravidas Mehrotra, who had lost by a slim margin of 5,094 votes in 2017. Pathak had got the votes of several Shia Muslims that time in the name of Atal Bihari Vajpayee, who had represented the Lucknow parliamentary seat.”

“Although Mehrotra is a good candidate, we are supporting Sadaf Jafar of the Congress because she is a fighter,” Arshad said.

Jafar was arrested in connection with the anti-CAA protests in December 2019 and allegedly brutally assaulted in custody.

Rajneesh Gupta, a local corporator, is the BJP candidate from Lucknow Central. He has been promising voters clean drinking water, a proper sewer line and better law and order but has been found searching for answers when asked what his party’s government has done in the past five years.

“Why did the BJP wait for five years to give these things to the people?” Jafar asked the people during her door-to-door campaign.

There have also been claims of infighting in the BJP and the SP in some seats.

Anjani Srivastava is the BJP candidate for Lucknow West. There is speculation that Saurabh Srivastava, son of Suresh Kumar Srivastava, the BJP MLA who died of Covid last year, is opposing Anjani. Armaan Khan, the SP nominee, had contested as the BSP candidate from Lucknow West in 2017 and come third. Anjani has made people’s “security” and preventing “the SP’s goons” his election issues.

There are a substantial number of Muslim, Yadav and Dalit voters in the Bakshi Ka Talab constituency who don’t vote the BJP, which has fielded Yogesh Shukla there. Sources claimed that sitting BJP MLA Avinash Trivedi’s supporters are opposing Shukla. This may benefit Gomti Yadav of the SP, who was elected from there in 2012.

The BJP has fielded Rajeshwar Singh, an IPS officer who had taken voluntary retirement, from Sarojininagar in Lucknow. He is a fresh face but is being opposed by the supporters of Swati Singh, the sitting MLA and women’s welfare minister. Abhishek Mishra, who was science and technology minister in Akhilesh’s government and MLA from Lucknow North in 2012, is challenging Singh, who repeats in his speeches the communal language of Adityanath.

Mohanlalganj of Lucknow is a reserved seat where the SP first gave the ticket to sitting MLA Ambrish Singh Pushkar but replaced him with former MP Sushila Saroj. Pushkar’s supporters are not happy and are allegedly campaigning for the BJP’s Amresh Kumar. There is a substantial Dalit vote in the constituency and the BSP’s Devendra Pasi claims they are with him.

Former SP MLA Indal Rawat joined the Congress recently and is contesting from Malihabad in Lucknow because the SP gave the ticket to Sonu Kanaujia, his bête noire in the party. Sitting BJP MLA Jai Devi is seeking re-election from here.

Ashutosh Tandon, urban development minister in the Adityanath government and second-time BJP MLA from Lucknow East, is seeking re-election. The SP’s Anurag Bhadauria, who was runner-up in 2017, is the challenger. The seat has been with the BJP since 1996 but Bhadauria has been active here even after losing five years ago.