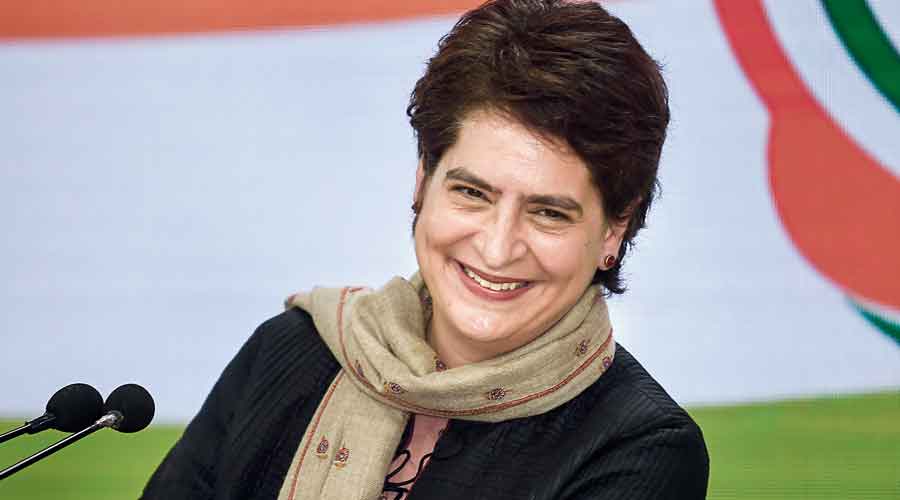 Priyanka Gandhi Vadra on Thursday said it was the “moral responsibility” of Prime Minister Narendra Modi to prevent donations given by millions of people to the Ram Temple Trust from being looted by BJP leaders and bureaucrats in Uttar Pradesh.

A news report has claimed that relatives of BJP leaders and government officials had allegedly “usurped” land near the upcoming Ram temple in Ayodhya, prompting the Uttar Pradesh government to order a probe. The fresh claims have been made in the aftermath of allegations that some members of the temple trust who are associated with the BJP have bought land at bloated rates.

Priyanka, the Congress general secretary in charge of Uttar Pradesh, said at a media conference in Delhi on Thursday: “Whose responsibility is it to ensure that the donations given by millions of people are used properly? How is the money getting into private pockets? BJP leaders and bureaucrats have indulged in loot through dubious land deals around the temple in Ayodhya. It goes beyond chief minister Yogi Adityanath, it is the Prime Minister’s moral responsibility.”

According to the latest report, MLAs, mayors and relatives of the commissioner, sub-divisional magistrate and the deputy inspector-general of police had bought land in Ayodhya after the Supreme Court announced the verdict in the Ramjanmabhoomi-Babri Masjid dispute, which cleared the way for the construction of the Ram temple.

Priyanka dismissed the investigation as “eyewash”.

“…Come to UP and you will realise how the system functions. No official has the guts to question BJP leaders. The (temple) trust was formed by the Supreme Court and the investigation should happen under its watch. After all, it is an attack on the faith of Hindus. People gave their hard-earned money; even the poor donated their little savings. And that money is being looted,” she said.

The Congress leader insisted that top functionaries of the BJP were involved and the state government was aware of what was going on. The Congress had demanded the Supreme Court’s intervention in June when the allegedly murky land deals were first reported but new claims have been made now, which indicate an elaborate plan to rip off donations running into crores.

Rahul Gandhi has also taken up the issue. “Hindu follows the path of truth. Hindutva robs under the guise of religion,” the Congress leader tweeted in Hindi.

The Shiv Sena, once the BJP’s closest ideological ally that has now joined forces with the Congress, accused the BJP of thievery.

Saamana, the Sena-run newspaper, said in a scathing editorial: “The BJP’s Hindutva is a kind of a chor bazaar. The BJP has been saying that the Shiv Sena has divorced Hindutva for the sake of power. But the BJP should keep this commercial Hindutva to itself. These people have not even allowed Lord Ram to stay away from their commercial dealings. Someone else died for the temple’s sake and the BJP is making gains out of it.”

The Congress on Thursday released purported sale deeds to call attention to the full extent of the alleged scam to divert funds from the trust set up to build the Ram temple.

Congress communications chief Randeep Surjewala alleged that land worth Rs 2 crore had been purchased by the Ram Temple Trust for Rs 26.50 crore.

“On March 18 itself, at 7.10pm, Pathak sold 12,080sqm of the same land to Ravi Mohan Tewari for Rs 2 crore. After five minutes, this portion of the land was sold to the temple trust for Rs 18.50 crore. The witnesses again were Anil Mishra and Rishikesh Upadhyay, both linked to the BJP. Anil Mishra is also a trustee and former head of the RSS in the state. The price of this piece of land grew by Rs 5.50 lakh per second, probably the fastest-ever in the world.”

Priyanka asserted that only a fair probe can reveal who was the kingpin of the alleged racket and how donations for the Ram temple had been looted.

Surjewala asked: “Why are Prime Minister Modi and chief minister Yogi Adityanath silent on this brazen loot? Will they punish the culprits? Will trust secretary Champat Rai, who is also the VHP head, and Anil Mishra, a trustee, be held accountable?”