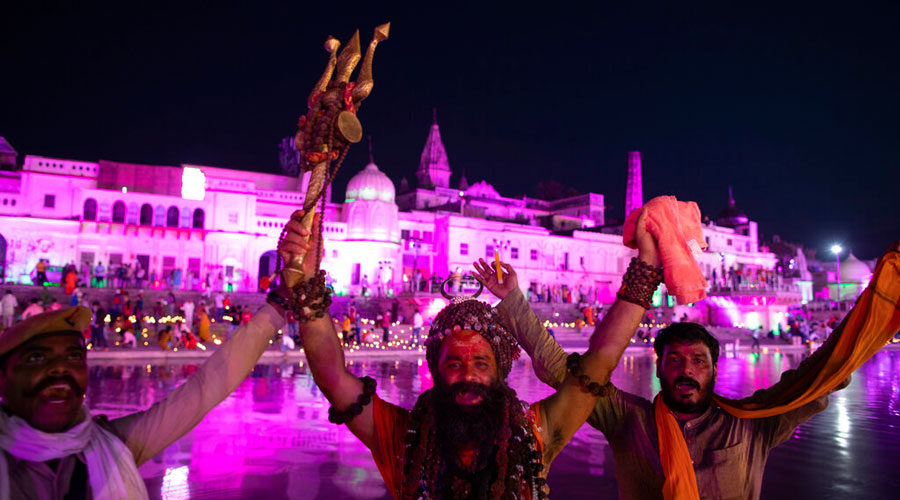 Various US-based diaspora groups are mobilising opinion against a planned celebration at Times Square of the foundation stone-laying ceremony of the Ram temple in Ayodhya on Wednesday, calling the New York jamboree a “grand spectacle for an event marred by hate, violence and polarisation”.

They have been calling the mayor’s office and other elected officials besides the owners of the giant billboards which the American India Public Affairs Committee (AIPAC), a diaspora group, has leased to beam massive images of Lord Ram, 3D portraits of the temple’s design and architecture across Times Square to reconsider the “decision to allow the use of public space” for the “tone deaf” planned commemoration.

Speaking for the coalition of diaspora groups involved in the effort to provide Americans in general and New Yorkers in particular the historical perspective in the face of the glitzy event that is being planned at Times Square along with singing of bhajans and distribution of sweets, Sunita Viswanath of the Hindus For Human Rights told The Telegraph on Tuesday evening that “we will be present to present the other voice”.

“I am a Hindu, my Hinduism tells me that we are all one. I do not recognise this brand of Hinduism that believes I am better than you,” Viswanath said.

Categorically professing respect for all faiths and people’s right to display it at a place of worship, Manish Madan of the Global Indian Progressive Alliance said the AIPAC’s planned commemoration “is not only devoid of the recognition of the deeply troubling historical context, but it also usurps the religious and moral sentiments of many Indian-Americans spread globally, including reinforcing saffron supremacy on US soil — which is fundamentally against America’s secular character that we all promise to uphold.’’

While asking the New York City to disallow the event that has been hash-tagged on social media as “SriRamTakesOverTimesSquare”, the progressive groups have also appealed to AIPAC to recognise that the planned celebration on a publicly owned space “inadvertently celebrates violence, hatred, polarisation amidst loss of innocent lives” and also legitimises a “Hindutva agenda, a form of religious supremacy which is neither representative of the world’s oldest religion, Hinduism, nor does it represent the sentiments of many Indian Americans who indeed practice Hinduism”.

The progressive groups, too, had considered purchasing a billboard for August 5 but the cost is prohibitive and, instead, one of the coalition partners has decided to do some advertising on a mobile truck.

Rohit Tripathi of Young India was particular in stressing that the counter-narrative of the diaspora is not being pushed by Muslims alone but is a collective effort of all communities.

“No doubt there are some sectarian groups but the vast majority represent a progressive sentiment that is opposed to the Indian American voice being hijacked by the Hindutva brigade using the garb of culture and religion,” he said.

Speaking about the event last week, AIPAC president Jagdish Sewhani had told PTI that among the prominent billboards that are being leased for the occasion are the giant Nasdaq screen and the 17,000sqft wrap-around LED display screen at Times Square, considered among the largest continuous exterior displays in the world and the highest-resolution exterior LED screen.