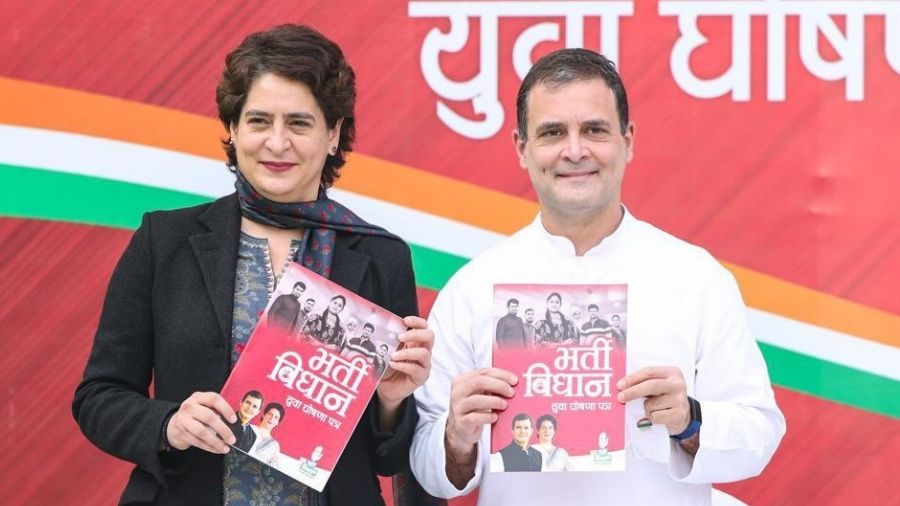 Rahul Gandhi and Priyanka Gandhi Vadra on Friday released the Congress' manifesto for the youth of Uttar Pradesh ahead of the assembly elections, saying only the party can give a new vision to the youth in the state.

Addressing a press conference at the launch of the 'youth manifesto' called 'Bharti Vidhan', Rahul Gandhi said the vision document is "not hollow words" but has been drafted after consulting youth whose views are reflected in it.

"The youth in Uttar Pradesh need a new vision and only Congress can give that vision to the state," the former president said.

"We don't spread hatred, we unite people and we want to create a new Uttar Pradesh with the strength of youth," Rahul Gandhi added.

In her remarks, party leader Priyanka Gandhi said the biggest problem in the state is recruitment and the youth are disappointed.

She said her party in UP wants the focus to be on development and not on negative propaganda based on caste or communalism that is going around.

The party is going to the polls with the focus on youth and women and has announced that it will reserve 40 per cent of tickets for women in Uttar Pradesh.

Polling for the 403-member Uttar Pradesh Assembly is scheduled to be held in seven phases from February 10 to March 7 and the counting of votes will be held on March 10.