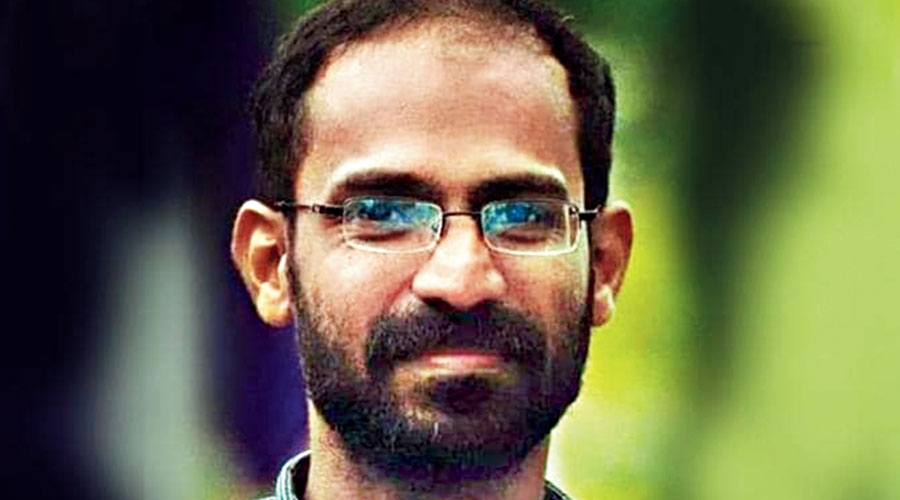 The Uttar Pradesh government told the Supreme Court on Friday that Siddique Kappan, in custody for over 45 days after being arrested on his way to Hathras where a Dalit girl was brutalised and murdered, had been travelling under the “cover” of a journalist and held a post in the Popular Front of India (PFI).

The PFI, which describes itself as a socio-political movement that seeks to empower Muslims and other marginalised sections, is accused of indulging in violence but it has not been banned. The Narendra Modi government has been considering a ban since its first term. In the absence of a ban, which has been sought by some BJP-led state governments, the PFI remains a legitimate organisation.

Kappan’s wife Raihanath Kappan said he had no links with the PFI. For arguments’ sake, even if he had, “will they go and arrest journalists who have links with the RSS or the BJP?” Raihanath told The Telegraph over the phone from Kerala on Friday evening.

The Supreme Court on Friday recorded the Uttar Pradesh government’s undertaking that Kappan would be allowed access to his lawyer and its denial of the charge that he had not been allowed to do so till now.

Kappan has been booked for sedition and under the stringent Unlawful Activities Prevention Act and is lodged in a Mathura jail.

The editor of azhimukham.com told this newspaper that Kappan had informed the Malayalam news portal he was travelling to Hathras to file a report for it.

K.N. Ashok, the editor of azhimukham.com, said Siddique had joined the portal as a Delhi-based retainer in January this year. The portal had submitted an affidavit along with the habeas corpus petition filed before the Supreme Court a day after the arrest.

“The purpose of the affidavit was to prove his credentials as a journalist who wrote for us,” said Ashok.

The Supreme Court is hearing a habeas corpus petition filed by the Kerala Union of Working Journalists (KUWJ), of which Kappan is the Delhi unit secretary, alleging he was being illegally detained and denied legal and family access.

On Friday, when the matter came up before the bench of Chief Justice S.A. Bobde and Justice A.S. Bopanna, the court noted that though the Uttar Pradesh government had claimed to have filed an affidavit on Kappan, it had not received any such document.

The court asked the registry to verify the claim so that the KUWJ, represented by senior advocate Kapil Sibal, could file a counter-affidavit.

“List the matter after one week. Shri Tushar Mehta, learned solicitor-general appearing on behalf of the respondents, states that he has filed a counter-affidavit. We find there is no such affidavit on record. Mr Kapil Sibal, learned senior counsel appearing on behalf of the petitioner, states that he has also not been served the copy of the counter-affidavit,” the bench said.

“The registry is directed to verify the same. If such affidavit is on record, as prayed for, the petitioner is allowed to file rejoinder affidavit in the meanwhile. Shri Tushar Mehta… further states that the advocate can meet the accused in the jail where he is lodged to take instructions and the signature in the vakalatnama. This statement is recorded and it is ordered accordingly.”

The Uttar Pradesh government claimed that none from Kappan’s family had come to meet him despite the family being informed several times. According to the government, family members had spoken to Kappan only over mobile phones.

“The person in custody, namely Siddique Kappan, is the office secretary of the Popular Front of India (PFI) using a journalist cover by showing the identity card of a Kerala-based newspaper named ‘Tejas’ which was closed in 2018. It is revealed during investigation that he along with other PFI activists and their student wing (Campus Front of India) leaders were going to Hathras under the garb of journalism with a very determined design to create a caste divide and disturb the law-and-order situation (and) were found carrying incriminating material,” the Uttar Pradesh government said in an affidavit.

Sources said on Friday that the affidavit was filed on Thursday and it was possible that it had not moved through the official channel and reached the judges during the hearing.

“When he was brought by the STF to Delhi, he misled the police by giving a wrong residential address…. He did not assist in the investigation and gave misleading details. His flat mate who is also a member of the PFI and its various wings denied access. Finally, armed with search warrants, when the premises were searched by the police, further incriminating material has been recovered, all of which is the subject matter of investigation.”

In Kerala, Kappan’s wife questioned the logic of describing her husband as a member of the PFI.

“I have been saying from the beginning that he has absolutely no links with the PFI or any such organisation. He is just a journalist trying hard to take care of his family,”Raihanath said.

“But the point that I want to make is regarding the rationale of arresting a man and accusing him of being a member of the PFI. For argument’s sake, let’s say he is from the PFI. First, it is not a banned organisation. Second, will they go and arrest journalists who have links with the RSS or the BJP?” Raihanath asked.

“I’m sure the logic that applies to my husband will not apply to journalists who are part of the RSS, BJP and such other organisations.”

The Supreme Court on Friday orally expressed anguish about “inaccurate reporting” in the media about the last hearing despite the court directing the Uttar Pradesh government to file an affidavit.

“There was unfair reporting about this matter when it was adjourned on the previous occasion,” the CJI remarked.

However, the bench did not elaborate.