A study by researchers from Jawaharlal Nehru University (JNU) and University of Maryland have found that the scourge of untouchability is thriving almost seven decades after the Constitution proscribed it. 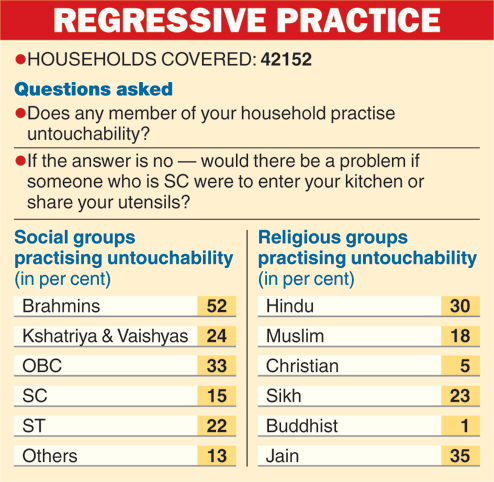 New Delhi, July 21: A study by researchers from Jawaharlal Nehru University (JNU) and University of Maryland have found that the scourge of untouchability is thriving almost seven decades after the Constitution proscribed it.

On a day when BSP leader Mayawati's asserted that Manuvadi thinking was prevalent in India, the study titled - The Continuing Practice of Untouchability in India: Patterns and Mitigating Influences - revealed that the regressive social practice is very high among Brahmins within Hindus and Jains among all religions.

Research scholars Amit Thorat of JNU and Omkar Joshi of the University of Maryland had covered 42,152 households across the country for their survey which had representations from a cross-section of the social and religious groups.

The research findings have been presented at a conference organised by the Population Association of America San Diego in California. Thorat said they were in the process of getting the paper published in a research journal.

Sharing details of the survey findings, Thorat said of the households surveyed, 27 per cent admitted to practising untoucability, including 30 per cent households in rural and 20 per cent in urban areas.

Thorat said prejudices and biases of the people had shape the responses. He, however, added: "Some people may have given politically correct answers which may not be what they actually practice."

The survey has revealed that among social groups the practice of untouchability was the highest among Brahmins, followed by Other Backward Classes (OBCs).

The Brahmins probably feel the need to adhere to the notion of ritual and purity more than any other group. It is intrinsically linked to their identity from which they derive pride and social dominance, the study said.

The questions (see chart), Thorat told The Telegraph, had been framed keeping in mind the prevailing mindset that Dalits were unclean and impure.

The OBCs, however, have overtaken other forward castes in their practice of untouchability. The survey states that the reason for this could be Sanskritisation, wherein low and middle caste groups emulated upper caste rituals and practice with the intention to get social acceptance.

The STs are outside the Hindu varna system (caste hierarchy), hence do not fall in this category. The survey argues that tribals always owned land and this might be the reason why they consider themselves superior to lower castes with no rights.

Even though the caste is a phenomenon of the Hindu religion, other religions also have it in more muted and varied forms.

Among other religious groups, the Jains were found to have taken the lead when it comes to practicing untouchability.

One reason could be that they are strictly vegetarians and are not comfortable in entertaining non-vegetarians at home. Though the religion is an offshoot of Hinduism, it seems to share some commonalities with Hinduism.