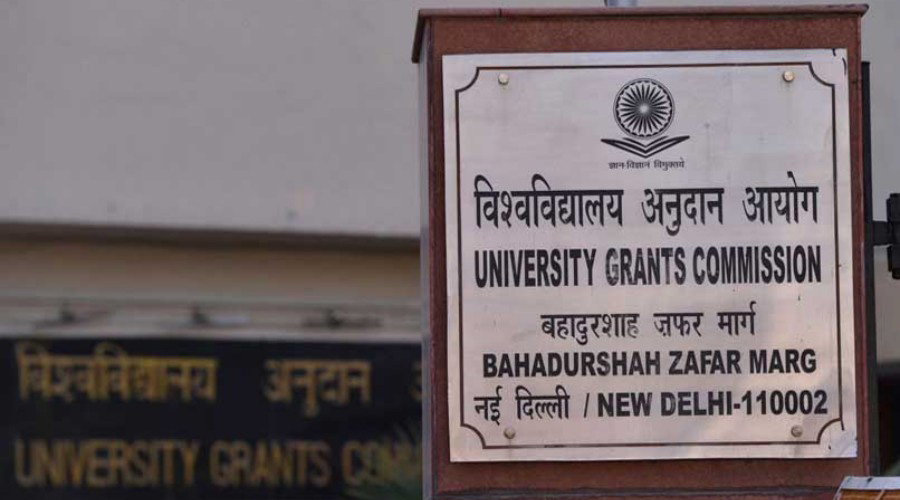 This is the first time the higher education regulator is attempting to draw up a full-fledged history syllabus instead of issuing general guidelines, academics said
File picture
Basant Kumar Mohanty   |   New Delhi   |   Published 23.03.21, 02:29 AM

The University Grants Commission has come out with a draft undergraduate history syllabus that some teachers and students said attempted “saffronisation and distortion” by playing up the Vedic period and Hindu religious texts and diminishing the importance of Muslim rule.

This is the first time the higher education regulator is attempting to draw up a full-fledged history syllabus instead of issuing general guidelines, academics said.

The commission had in the past suggested that individual universities would be allowed only “20 to 30 per cent deviation” from any syllabus it framed.

The commission put up the draft Learning Outcome-based Curriculum Framework on BA (history) on its website on February 15 and sought feedback by February 28.

⚫ The first paper of history (honours) in Delhi University (DU) now covers pre-historic times and the early historic period. But the first paper in the new syllabus is on the “Idea of Bharat”, and includes topics such as “Eternity of Synonyms Bharat” and religious literature like the Vedas, Vedangas, Upanishads, Smritis and Puranas.

“Religious characters and mythological concepts have been given importance,” he said.

A third-year history student at St Stephen's College, Delhi, said the new syllabus had introduced uncritical glorification of ancient Indian civilisation by equating it with “eternity”.

“History is about understanding the processes of continuity and change. Nothing is eternal in history. To say something is eternal is against the principles of historical research," the student said.

⚫ In the draft syllabus, the third paper, "From Earliest Times to 550 CE", includes features of the "Indus-Saraswati Civilisation" and its continuity, fall and survival.

The Saraswati is mentioned in the Vedas but its provenance is disputed. The Sangh parivar insists that the Saraswati existed and symbolised continuity from the Harappan era to later Hindu periods, in contradistinction to the theory of the Aryan invasion.

"No such term as the 'Saraswati civilisation', which has been introduced here, existed before," Meena said.

"We study the Harappan civilisation. Now the 'Indus-Saraswati civilisation' has replaced it in the draft syllabus. With this term, they have attempted to establish continuity," the St Stephen's student said.

⚫ The 12th paper, on "Cultural Heritage of India", includes topics such as "Ramayana and Mahabharat: Tradition of cultural heritage".

The St Stephen's student said some class discussion of the two epics did take place under the current DU syllabus, but the new syllabus's formal coverage of the two books under a separate head sounded ominous.

"There's nothing wrong with the teaching of the Ramayana and the Mahabharata as 'sources' of history, but to uncritically valorise them for their own sake will be problematic," the student said.

⚫ The existing DU syllabus has three papers, taught over three semesters, devoted to the period from the 13th century to the 18th. But the new syllabus has just one paper, the seventh, covering this period, reducing the importance of Muslim rule.

"Mughal history has in a way been sidelined," Meena said.

⚫ The new syllabus uses the word "invasion" in connection with several Muslim rulers such as Babar - a term the current DU syllabus shuns.

"In the draft syllabus, the term 'invasion' has been used only in the case of Muslim rulers, not even against the East India Company," Meena said.

"The effort is to suggest a division in terms of Hindu and Muslim society in the mediaeval period," Meena said.

"Earlier, we studied how all communities have co-existed and have variously interacted over time. They cannot be studied in isolation."

⚫ Works by several prominent historians have been dropped from the reading lists, such as R.S. Sharma's book on ancient India and Irfan Habib's book on mediaeval India. On the other hand, books by little-known authors, some of them believed to be pro-Sangh, have been included.

⚫ The existing DU history paper that covers the period from 1857 to 1950 features references to Dalit politics, which are absent from the new syllabus.

The draft syllabus describes the 1857 uprising against the British as the "First War of Independence", a term coined by Sangh ideologue Vinayak Damodar Savarkar.

However, it makes no mention of the uprisings that took place before 1857, such as the Sanyasi Rebellion in Bengal, Paika Rebellion in Odisha and the Polygar Rebellion in Tamil Nadu.

The new syllabus is also silent on the 1905 partition of Bengal and the resistance to it.

⚫ Leaders such as Mahatma Gandhi, Jawaharlal Nehru, Vallabhbhai Patel and Bhim Rao Ambedkar receive less attention compared with the current syllabuses, and there is little content on the spread of communalism in the early 20th century.

"Previously Mughal history occupied too much space. It's not being sidelined but a course correction is being made. There was less content on the kings of south India and other parts. Now they are getting space," Singh said.

On the allegation of the glorification of mythology, Singh said: "Oral history is a recognised tool for historical research. These narratives were being ignored but people believe in these narratives."

An email and a text message brought no response from UGC chairman D.P. Singh.