Tractor, not China, can move Modi to anger 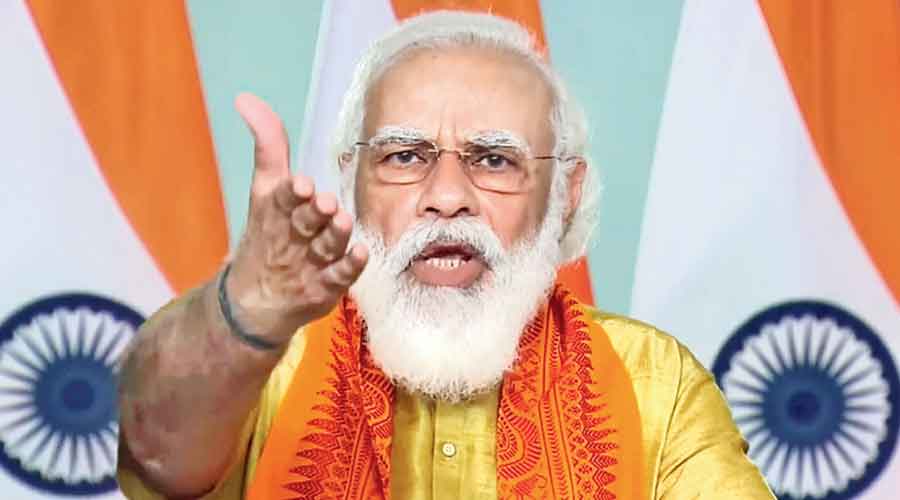 Not China, at least not in public, which rubbed another fistful of salt into the wound by saying on Tuesday that it does not “recognise the so-called Ladakh Union Territory illegally set up by India”.

Not the Babri Masjid demolition, but a chance to display his feelings might come up on Wednesday when a special court delivers the verdict 28 years after the destruction took place.

Not the Gujarat riots, although the massacre made him sad just as he would have been had “a puppy come under the wheel of a car” in which he was sitting.

Not the economic crisis that has made India the second-worst performer among the major economies in the first quarter.

Now, the question has been answered: the sight of a burning tractor does leave Modi gutted.

Modi was referring to an incident at India Gate on Monday during a protest against the new farm laws.

He was speaking after inaugurating through videoconference development projects for Uttarakhand, a hill state that has also witnessed farm protests.

There was another way to look at the tractor burning.

“If it’s my tractor and I want to burn it, what is your problem?” Punjab chief minister and veteran Congress leader Amarinder Singh had said on Monday while making it clear he does not support such forms of protest.

“It shows what people are feeling... their anger. Farmers don’t know who is going to buy (their produce) from them,” the chief minister had added.

Modi signalled on Tuesday that there would be no rethink on the decisions although his repeated references to the farm protests are being read as a sign that the government is no longer viewing them as a reaction limited to a few states.

Modi appeared to hold the Gandhi family responsible for the farmers’ agitation, claiming that their “despondency” was at the root of the politics of “opposing for the sake of opposing”.

The Prime Minister struck a defiant note by asserting that despite the opposition for “selfish reasons”, the government would continue to bring in “big reforms” in “national interest”.

He diagnosed this “irrelevance” as the cause of the “chhatpatahat (restlessness)”, “bechaini (anxiety)” and “nirasha (despondency)”, himself appearing angry at the intensifying protests that his and his government’s assurances have failed to mollify.

“A particular party where four generations of one family have lorded over the country, they are riding on the shoulders of others to get them to oppose every work done in national interest, to fulfill their own selfish interests,” Modi said, without naming the Nehru-Gandhis or the Congress, which has been intensely opposing the farm decisions and has lent its full support to the farmers’ agitation.

Modi suggested that the Congress could not bear being in the Opposition although the party had been out of power for only a few years. He added that there were many smaller parties that had never got the opportunity to rule but had always remained loyal to national interest. Modi, however, didn’t name these parties.

The Prime Minister listed his government’s major projects — the Jan Dhan bank accounts, GST rollout, one-rank-one-pension, purchase of Rafale jets, 10 per cent reservation for the economically weak among the upper castes, surgical strikes on Pakistan, construction of the Sardar Patel statue and the “bhoomi pujan” for the Ram temple in Ayodhya. Modi stressed that all these decisions were in national interest but pointed out that “in logon ne (these people)” had opposed the steps.

“The continuous efforts for big reforms for Aatmanirbhar Bharat are in national interest to make the country strong, and these will be sustained,” the Prime Minister said.

Since the farm bills were steamrollered through Parliament, disregarding objections raised by the Opposition and protests by farmers, Modi has in almost every public appearance slammed his rivals for “misleading” the farmers.

Initially, the government had hoped that the farm protests would be confined to Punjab and Haryana, the two states where fears of being deprived of the minimum support price are more due to big land holdings, but they have now spread to several states.

The Prime Minister said the new laws would “liberate” the farmers from middlemen. “These people (political opponents) are unable to tolerate this freedom. One more source of earning black money is gone,” he said, adding that the farm laws would give cultivators the liberty to sell their produce in the open market.

Referring to the Congress’s opposition to other steps of the government, Modi said: “They objected when Sardar Patel’s statue was being inaugurated. None of their leaders has so far visited the Statue of Unity.”

“They even opposed the bhoomi pujan of the Ram temple,” Modi said.