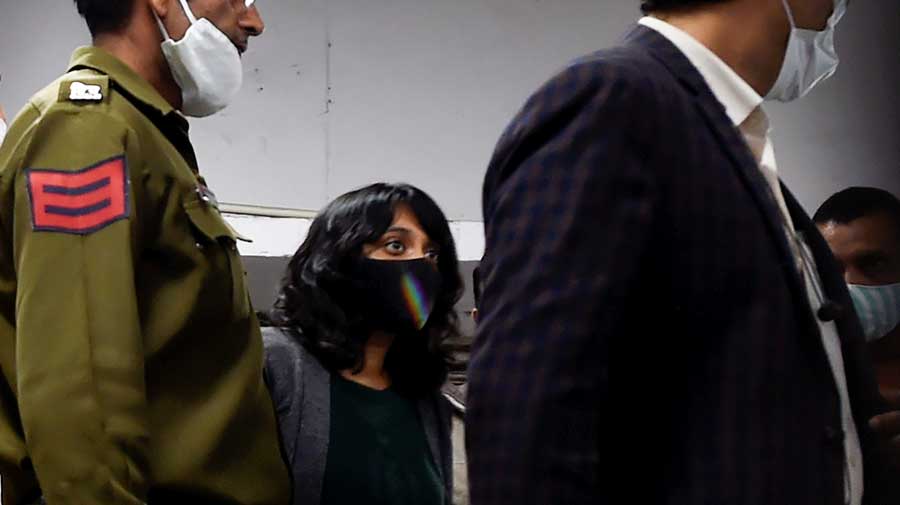 Friends and co-volunteers of climate activist Disha Ravi, who was granted bail by a Delhi court on Tuesday in the toolkit sedition case, are relieved but not ready to restart their activities immediately as they have yet to come to terms with her arrest and the subsequent allegations they faced as a community.

“Of course, we are all really excited that she has got bail. But it’s going to take some time for us to figure out if we need to make any changes in the way we approach issues,” a volunteer and former college mate of Disha told The Telegraph on Wednesday.

A business administration graduate from a city college, 22-year-old Disha was whisked away from her home in north Bangalore by a posse of Delhi police officers on February 13 without even following the basic legal requirements such as informing the local police and procuring a transit warrant from a local court.

One of the founding members of the Karnataka chapter of Fridays For Future (FFF), a global group of young climate activists originally started in 2018 by Swedish activist Greta Thunberg, Disha was slapped with charges of sedition and criminal conspiracy for a social media toolkit she edited and shared in support of the farmers’ movement.

The Delhi sessions court on Tuesday granted bail to Disha after demolishing almost every charge levelled against her, terming the prosecution evidence “scanty and sketchy”.

The volunteers didn’t have concrete information on whether Disha had returned to Bangalore on Wednesday but said she was unlikely to interact with the media since the investigation was on.

“We haven’t really had the time and energy to sit down and talk to each other about our plans for the coming days since all of us had been hooked to the bail proceedings,” said the volunteer and former college mate who declined to be named.

The arrest has had a chilling effect on the young volunteers of the FFF who have generally preferred to lie low. Many of them have lamented that their parents have now asked them to stay away from social media until the storm blows over.

The volunteer pointed to how the whole movement was sullied by those who called it anti-national. “Another thing that hurt us was the way people called us anti-national although we did nothing illegal,” she said.

Yuvan Aves, a Chennai-based volunteer of the FFF who kept a close track of the developments after Disha’s arrest, said: “We are very happy with the way the bail order articulated there is not a shred of evidence against Disha. It has set precedence and gives a ray of hope and courage to all young activists like Disha.”

“We have been perturbed by the arrest but didn’t allow ourselves to be cowed down by the manner in which the government targeted young people, whether in Hathras or the farmers’ protest,” he said, referring to how young activists and journalists had been arrested in both cases.

Another FFF volunteer, who too declined to be named, noted that Disha had only been granted bail. “Obviously the general mood is one of great relief. But we are not rejoicing too much because she has not been acquitted of the charges,” she said.

But the volunteers are “careful enough to ensure that this incident will not change our course”.

“We don’t want this incident to change the way we worked prior to the arrest. We will sit down to discuss and chart the way forward without hurrying into anything at the moment,” said the young climate activist.
Joel, an FFF activist based in Shillong, said: “The only thing that matters now is to see her acquitted in the case.”

“It was disheartening at first, but we will not be dissuaded from our campaign for climate justice,” said the young volunteer who has pledged to continue to fight for the cause he believes in.

Asked if the FFF planned any awareness programme to ensure others don’t land in trouble, Joel said chapters worked independently.

“This is a decentralised movement in which individual chapters use their discretion on what to take up and what to share on social media. But we do recommend certain norms to be followed to be on the right side of the law,” said the volunteer who chose to be known only by his first name.

“But as we go forward we will try and create a better understanding of how the system works (in India),” Joel added.