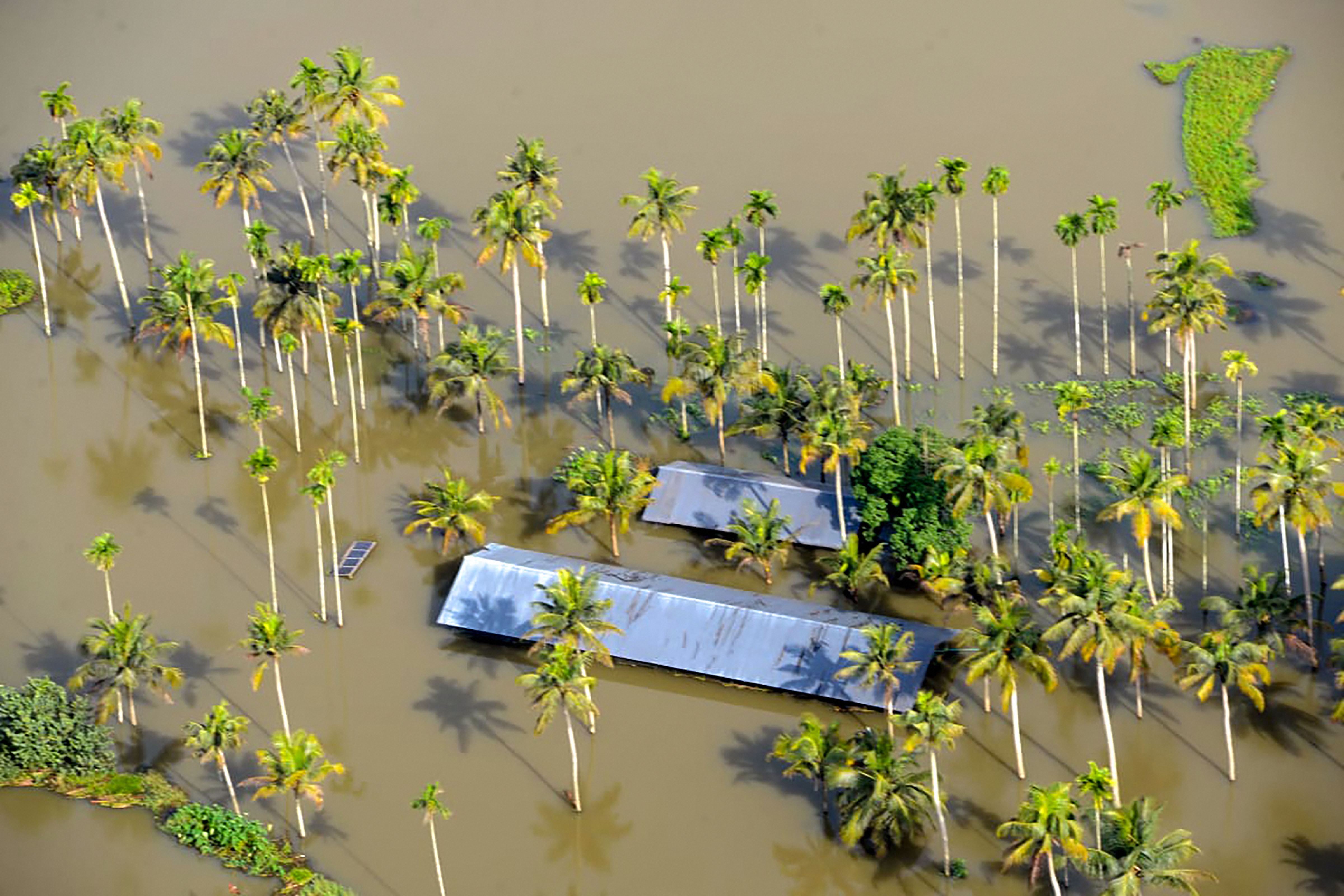 After pounding Kerala for days, there was some let up in the rain fury on Sunday even as the toll climbed to 72, with 58 people still missing and over 2.51 lakh people in relief camps across the state.

With the recovery of more bodies, including 23 from Malappuram, 17 from Kozhikode and 12 from Wayanad since August 8, the toll has gone up to 72, as per the latest report issued by the government at 7 PM Sunday.

Congress leader Rahul Gandhi visited a relief camp at Wayanad and patiently heard the woes of the people who were displaced from their homes following flooding and destruction of their dwellings.

Gandhi also visited Kavalappara, a 10 acre settlement near Nilambur in Malappuram, which bore the brunt of a massive landslide on August 8.

The Wayanad MP on Sunday urged the state and Central governments to provide immediate assistance to those affected by the floods in Kerala and promised to do everything possible to get the people back on their feet.

'It is heart-breaking to see what all the people of Wayanad have lost. We will do everything in our power to help them get back on their feet,' the Congress leader tweeted after visiting people affected by floods and landslides in his constituency.

Local people said there was no sign of the 35 odd houses after the landslide and at least 65 people are suspected to have been buried alive.

An MDA official also said that nearly 50 bodies are suspected to be buried under the soil.

'Nearly 50 persons are suspected to be buried under the soil. This is the count we got from the Taluk authorities. We are yet to ascertain the number of houses that were destroyed.

The whole landscape has changed,' the official told PTI.

Over 1,000 kg of food items were air dropped in multiple sorties, a Defence press release said.

Chief Minister Pinarayi Vijayan held multiple review meetings with senior officials on Sunday and later told reporters that though the rains had subsided in the state, people should remain vigilant.

About 2.51 lakh people have been shifted to 1,639 relief camps, officials said.

At least 2,966 houses have been damaged completely.

Hundreds of people are still stranded at Attapadi, a group of tribal hamlets in Palakkad District.

Officials said most of the hamlets are deep inside the forest area and there are no proper roadways there.

They also said that nearly eight to ten hamlets have been totally cut-off from the main roads and the adverse weather was affecting rescue operations.

In Puthumala in Wayanad, where another landslide had wrecked havoc, 10 bodies had been recovered and seven people are said to be missing, Wayanad Collector A R Ajayakumar told the media earlier in the day.

Vadakara in Kozhikode district recorded 21 cm of rainfall, the highest in the state as of 8.30 AM Sunday, followed by Kodungallur in Thrissur (19.9) and Perinthalmanna in Malappuram (13.8), the IMD said.

Vijayan also said the water level in the major dams was not a cause of worry as of now.

The Idukki Dam, one of the biggest in the state, presently had only 36.61 per cent of its capacity, he added.

Flight operations from the international airport at Kochi resumed on Sunday afternoon, two days after it was shut due to inundation of the runway area following heavy rains.

According to the latest update from Southern Railway,many trains, including the Jamnagar express, Nizamuddin-Ernakulam Durrunto and Kochuveli-Amritsar express have been fully cancelled.

Six trains have been partially cancelled and two trains diverted.

Various agencies, including the Army, Navy, Coast Guard, NDRF, police, volunteers and fishermen are involved in the rescue operations at various places.

This is the second consecutive year that the floods and landslides have ravaged Kerala, which is yet to recover from the devastating deluge that claimed over 400 lives last year and had rendered lakhs homeless.