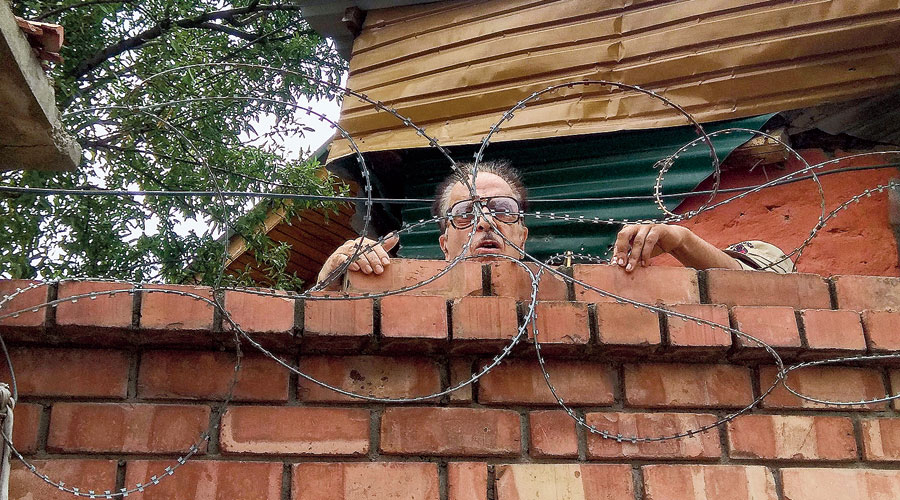 Former Union minister Saifuddin Soz was dragged back into his house here on Thursday by security personnel when he sought to address journalists from behind the barbed wire fortifying the boundary wall in Srinagar.

Less than 24 hours earlier, the Narendra Modi government had told the highest court of the country that the 82-year-old Congress leader “is free” and “was never detained or put under house arrest”. The Centre’s statement was recorded on Wednesday by a Supreme Court bench led by Justice Arun Mishra before it disposed of the petition filed by Mumtazunnisa Soz seeking her husband’s release.

On Thursday, a group of journalists visited Soz’s residence to interview him but they were not allowed to go inside. Soz then came near the boundary wall and began talking to the media, only his face visible through the barbed wire.

“The government told the Supreme Court I am a free person but the people (security officials) here don’t agree and say there is an order from above (to keep him inside). What can I do? You can see what has happened to civil liberties,” Soz said. “They (the government) are telling lies to the Supreme Court.”

Soon, a plainclothesman dragged Soz inside. The man in civvies and another man who appeared to be wearing a police cap asked the reporters to leave.

From behind the boundary wall, Soz could be heard saying: “Don’t touch me, don’t touch me.”

Soz later told The Telegraph over the phone that the plainclothesman who had dragged him inside had been deputed to help the policemen guarding him. “He is there in addition to the guards. I don’t know him. He is reportedly from (the) security (establishment),” the Congress veteran said.

“I would not say he manhandled me. But he tried to stop me physically. I told him to get away (from me) and that what he was indulging in was illegal,” Soz said.

Jammu and Kashmir government spokesperson Rohit Kansal iterated that Soz was not under house arrest.

“Mr Saiffudin Soz former MP and Minister not under arrest or detention. He has been to Delhi twice — in October and December. Free to go wherever he likes with usual security drill. No question of lying in Hon SC,” Kansal tweeted.

Soz’s son Salman Anees underlined that his father had gone to Delhi for medical reasons both times, and with government permission.

Another veteran Kashmir leader, Mohammad Yousuf Tarigami of the CPM, could travel to Delhi for treatment last September only after the Supreme Court had cleared the decks on a petition filed by party chief Sitaram Yechury.

The security officials assigned to protect Soz have allegedly been tasked with restricting his movements.

The personal security officers who used to guard the Congress veteran when he stepped out of his house were withdrawn after the August 5 decisions, he said.

Soz said he had tried to step out of home on Thursday, after a thwarted attempt on Wednesday, but was not allowed to.

“Some people today tweeted asking the Supreme Court that you are comfortable with whatever is spoken (by the Centre) in the courtroom. Why don’t you see this, what lies were told in the courtroom,” Soz said.

CPM state secretary Tarigami, who had himself been under house arrest, alleged that the government had last year lied about his detention too in the Supreme Court.

“The case is still pending in the apex court,” he said in a statement, asking the government to withdraw the restrictions on Soz and other politicians.

Thousands of politicians and activists were arrested or put under house arrest following the scrapping of Jammu and Kashmir’s special status. Most of them have been released but some, including former chief minister Mehbooba Mufti, continue to be in detention.

“The plea of the government in the Supreme Court that senior Congress leader and former Union minister, Prof Saifuddin Soz, had neither been put under house arrest nor were any restrictions imposed on him since August 5, 2019, is another glaring example of lies the BJP government has been making,” Tarigami said in the statement.

“His house detention like all other similar cases is not only illegal, mala fide and unconstitutional, but also extremely appalling. The house detentions without any administrative orders are unlawful, undermining due respect to human rights and individual liberty,” the CPM leader added.

Mehbooba’s daughter Iltija Mufti accused the government of manhandling Soz. “I faced the same situation in January when I tried to address the media at my house in Srinagar,” she said.