Officially, the tax department did not say which businessman it raided 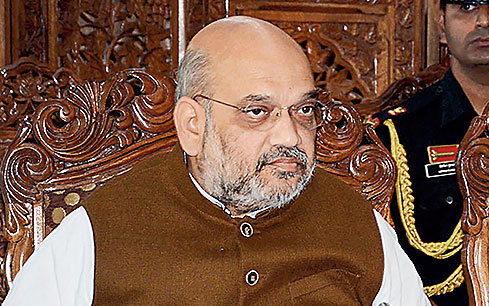 Income tax officials on Thursday purportedly raided premises linked to the businessman son of National Conference veteran Abdul Rahim Rather, the action coinciding with the visit of Union home minister Amit Shah who is reported to have pledged to tackle “corruption in high places” in Jammu and Kashmir.

Shah broke from the tradition of meeting Valley politicians from the pro-India camp, including leaders from the National Conference and the People’s Democratic Party, and instead gave an audience to a delegation of sarpanches, a grim reminder of the bitter hostilities that unfolded between the Centre and these outfits during the recent Lok Sabha elections.

The tax raids at the business and residential premises of Hilal Rather, son of former finance minister Abdul Rahim Rather, were apparently timed to coincide with Shah’s two-day trip that ended on Thursday and to send the message that Kashmir’s mainstream camp was equally on the radar of the Centre.

Sources said the raids were linked to “irregularities” at Jammu Kashmir Bank, whose chairman Parvez Ahmad was unceremoniously removed recently. Hilal is said to have defaulted on loans taken from the bank.

Officially, the tax department did not say which businessman it raided. The department said in a statement that sleuths “conducted search and seizure operations” on a prominent business group based in Srinagar, covering four premises in the Valley and six places in the Jammu region.

Anti-corruption bureau officials recently carried out raids at 10 premises of the Kehwah Group, a business house promoted by Sheikh Imran, the deputy mayor of the Srinagar Municipal Corporation. Imran too has allegedly defaulted on loans taken from Jammu Kashmir Bank and also swindled money in connivance with bank officers.

Abdul Rahim could not be contacted as his cellphone was switched off.

Chief secretary B.V.R. Subrahmanium said that at review meetings on Thursday, Shah instructed that corruption at high places must be tackled.

“The state government should take steps to ensure that the newly created anti-corruption bureau focuses on cases of rampant corruption by the high and mighty,” he quoted Shah as saying.

The National Conference did not comment on the raids. Party vice-president and former chief minister Omar Abdullah, however, appealed for a change in approach.

“After the two-day visit of the Union Home Minister to J&K, I hope there is a better understanding of the ground realities of the situation and the need to change the approach to the state,” Omar tweeted.

He was apparently referring to the new hardline policy pursued by the Centre after the February 14 Pulwama terror attack in which 40 CRPF personnel were killed.

Shah had on Wednesday urged the security forces to take on miscreants, an apparent reference to pro-azadi protesters. Within hours, he was literally snubbed as celebrations broke out at some places in Kashmir over Pakistan’s victory over New Zealand in the World Cup. Youths burst crackers and thronged the streets of the old city.

A state administration spokesperson said Shah was briefed in detail on the security scenario in Jammu and Kashmir and the home minister directed that “there should be zero tolerance towards terrorism and terrorists”. Shah is also believed to have said that strict action must continue against terror funding and that the “rule of law should be enforced”.

The spokesperson said the home minister’s focus was also on ensuring that the benefits of growth and development reached the poorest of the poor. “He asked the state government to focus on better and more efficient implementation of development schemes so that corruption and leaks are plugged and the citizens get the intended benefits,” the spokesperson said.

Shah visited the home of slain police officer Arshad Khan, who was killed in a militant attack this month. He handed over an appointment letter to his wife for a job in the state government.