Advertisement
Home / India / Geelani quits Hurriyat at the age of 90

Geelani quits Hurriyat at the age of 90

He heaps a litany of charges against his confidants-turned-rivals, calling them corrupt, rebellious and lacking in accountability 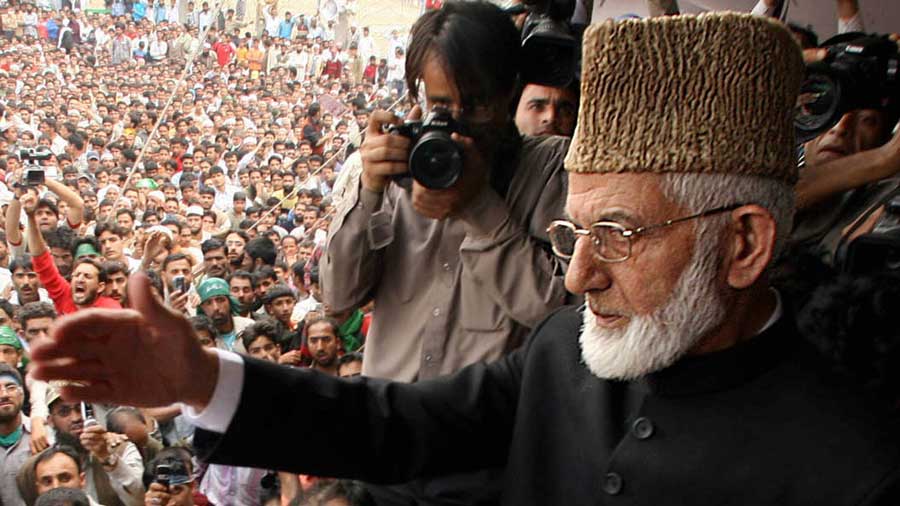 Geelani, 90, on Monday said he was parting ways from the Hurriyat, ending his decades-long association with the separatist forum.

The announcement is being seen as the culmination of his meaningful silence over the Centre’s decision last year to scrap Article 370 and the fear of his immediate family being hounded.

The nonagenarian had headed the hard-line Hurriyat faction since 2003 when the forum split after he accused the moderates, led by Mirwaiz Umar Farooq, of cosying up to Delhi.

The revocation of Jammu and Kashmir’s special status had left the separatist camp in disarray, landing many leaders in jail and — more important — silencing the veterans, including Geelani and Mirwaiz, who were not arrested.

Their mysterious silence has been the talk of the town for months. Many in Kashmir saw it as capitulation before Delhi in the face of possible arrest of the leaders’ family members.

Geelani announced his resignation from the Hurriyat through an audio message. He heaped a litany of charges against his confidants-turned-rivals, calling them corrupt, rebellious and lacking in accountability.

“Seeing the present condition of the Hurriyat conference, I am announcing to completely disassociate myself from the forum. The constituents of the forum have been informed of it (in a letter),” Geelani said in the audio message.

At least two letters attributed to Geelani started doing the rounds on social media after the audio surfaced. One of them denounced Pakistan and the other censured the Kashmiri separatists who were part of the Hurriyat faction he led.

Syed Abdullah Geelani, Ali Shah Geelani’s point man in Pakistan-occupied Kashmir, told The Telegraph that the audio and one of the letters, which blamed the local separatist leadership, were genuine but the other letter was not.

Abdullah Geelani told this newspaper in a WhatsApp conversation that his camp had released only the audio message of the senior Geelani to the media and not the letter.
“The letter was sent to the Hurriyat constituents and I do not know how it got leaked,” he said.

The immediate reason for Ali Shah Geelani’s decision, according to the statement, is Abdullah Geelani’s ouster from the PoK-based chapter of the hard-line Hurriyat as its convener.

The elder Geelani claims the Hurriyat constituents ganged up against his nominee -– both in the Valley and the PoK -- as they were unwilling to face unaccountability.
“When the time came for accountability and it was time to remove the veil off corruption, you feared losing your posts. Despite (the government’s) clampdown and pandemic, you met and supported the illegal decision (of the PoK-based leaders),” Ali Shah Geelani said.

Ali Shah Geelani claimed he had himself tried to reach out to the Hurriyat constituents after Article 370 was scrapped and urged them “to stand up against the government’s naked oppression and to lead and give hope to the besieged people of Kashmir”.

“Despite being under arrest and restrictions, I tried to find and reach out to all of you, regularly sent messages to you but all in vain. Even after making hectic efforts to reach you, I was unable to find you,” he added.

Geelani’s friends-turned-targets said they were evaluating the contents of his audio message and the letter, and would come out with a formal statement in a few days.

“We wonder how Geelani sahib can level allegations of corruption against us. If that was the case, why was he silent all these years?” one leader asked.

Separatist sources said that Geelani, largely under house arrest over the past decade, had himself chosen to be silent as he feared his family would be targeted.

“Geelani sahib had mellowed much before the August 5 decision (to scrap Article 370). His two sons were questioned by the National Investigation Agency (in terror funding cases early last year), and fearing their arrest or some other move, he did not issue a single statement all these months,” one leader said.

“He is under house arrest and if an audio statement could come out of his home this time, why could it not all these months?”

These sentiments had been echoed by Geelani’s deputy, Mohammad Ashraf Sehrai, in an interview to this newspaper last November in what was the first media interaction by any separatist leader after the August 5 decision.

Thousands of people including politicians, mostly from the mainstream camp, were arrested during the clampdown.

“If you have questions about it, the way I do, that why has there been so much silence on their (Geelani and Mirwaiz) part and, overall, (why) have they not elaborated their stand, should they answer it or should I? You should know that there was no consultation with us (over the silence),” Sehrai had said.

Although Geelani is considered the most popular separatist leader, his detractors have accused him of preaching militancy to youths and peace to his family. One of his sons is a doctor and another an academic.

Sources said Pakistan seemed angry with the top separatist leadership for its silence all these months and might be supporting Geelani’s new adversaries.

The younger Geelani, however, claimed his leader had issued several statements denouncing Delhi’s August 5 decisions and the clampdown. But separatist sources here said these statements were issued by his representatives in PoK and attributed to him.

The PoK-based leader told this correspondent to ask the opponents whether they were backed by Pakistan.