Girls are losing out on studies, says lawyer Prashant Bhushan 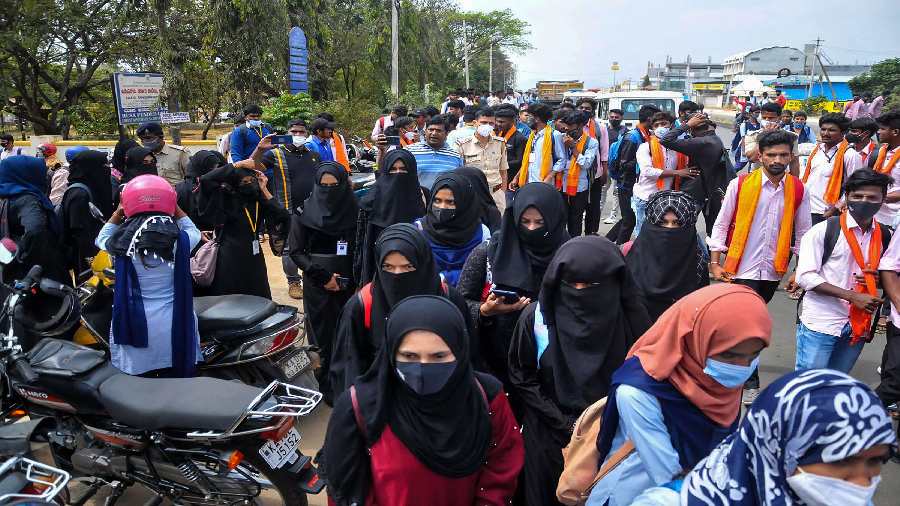 The Supreme Court on Wednesday agreed to hear next week a batch of pleas challenging the Karnataka High Court verdict refusing to lift the ban on hijab in educational institutions of the state.

A bench comprising Chief Justice N V Ramana and Justices Krishna Murari and Hima Kohli took note of the submissions of lawyer Prashant Bhushan that the matters were filed long back but were yet to be listed for hearing.

The girls are losing out on studies and have been facing difficulties, Bhushan said.

The bench said, Two benches are not functioning. So, we have to re-distribute. It will be listed sometime next week before an appropriate bench.

Prior to this, the appeals against the March 15 verdict of the high court, which had dismissed petitions seeking permission to wear hijab inside the classroom, were mentioned for urgent hearing on April 26 as well.

Several petitions have been filed in the apex court against the Karnataka High Court verdict holding that wearing of hijab is not a part of the essential religious practice which can be protected under Article 25 of the Constitution.

The high court had dismissed the petitions filed by a section of Muslim students from the Government Pre-University Girls College in Udupi, seeking permission to wear hijab inside the classroom.

The prescription of school uniform is only a reasonable restriction, constitutionally permissible which the students cannot object to, the high court had said.

In one of the pleas filed in the top court, the petitioner said the high court has erred in creating a dichotomy of freedom of religion and freedom of conscience wherein the court has inferred that those who follow a religion cannot have the right to conscience.

The plea said the petitioner had approached the high court seeking redressal for the alleged violation of their fundamental rights against the state government order of February 5, 2022, issued under Sections 7 and 133 of the Karnataka Education Act, 1983.

The high court had maintained that the government has the power to issue impugned order dated February 5, 2022, and no case is made out for its invalidation.

By the said order, the Karnataka government had banned wearing clothes that disturb equality, integrity, and public order in schools and colleges, which the Muslim girls had challenged in the high court.

Challenging the February 5 order of the government, the petitioners had argued before the high court that wearing the Islamic headscarf was an innocent practice of faith and an Essential Religious Practice (ERP) and not a mere display of religious jingoism.

The petitioners had also contended that the restriction violated the freedom of expression under Article 19(1)(A) and Article 21 dealing with personal liberty.