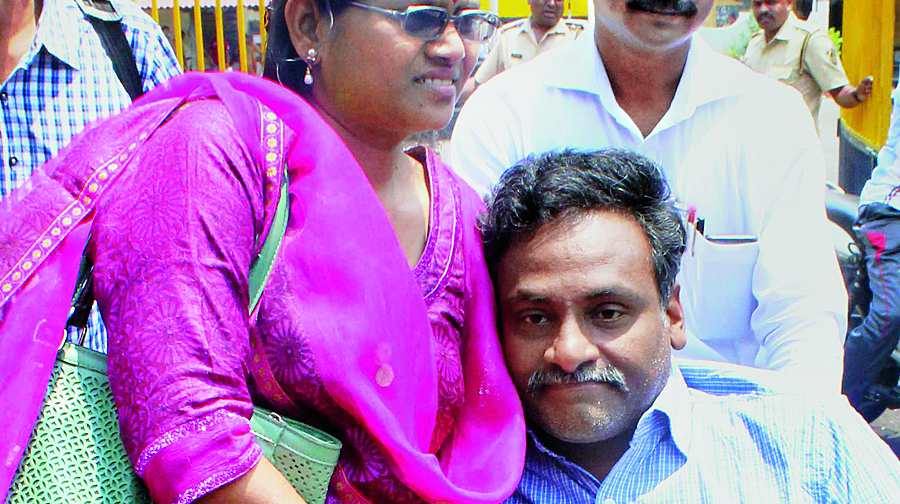 G.N. Saibaba will continue to remain in jail with the Supreme Court on Saturday suspending Friday’s judgment by the Nagpur Bench of Bombay High Court that had acquitted him and four other convicts in a Maoist-link case.

The high court had held that the sanction for Saibaba’s prosecution under the Unlawful Activities (Prevention) Act was “bad in law and invalid”, and that this had rendered the trial court judgment against all the accused “null and void”.

The apex court bench of Justice M.R. Shah and Justice Bela M. Trivedi ruled that the charges against Saibaba and the others were “very serious”, and the convictions could therefore not be set aside on a mere technicality. The appeal was filed by the state of Maharashtra.

The bench rejected a plea from Saibaba’s counsel R. Basant that the paraplegic former Delhi University professor — who has already spent more than eight years behind bars and who uses a wheelchair — be kept in house arrest.

Before he was convicted, Saibaba was given bail twice on health grounds  — the first bail order was cancelled by the high court and he was jailed afresh but the relief was later granted by the Supreme Court.

On Saturday, the apex court suggested that Saibaba file a regular bail application before it, which would be considered on merit.

It listed for December 8 the next hearing of the appeal against the high court verdict.

Earlier, Justice Shah had asked Basant, a senior advocate and former Kerala High Court judge, why the lack of a valid sanction had not been raised before the trial court, which convicted Saibaba and sentenced him to life imprisonment in 2017.

Basant accepted that no such application was made before the trial court but added that the issue of lack of sanction had been raised during the cross-examination.

Justice Shah said: “In the entire Section 313 CrPC statement (made by the accused before the trial court), the question of sanction was put to you but except saying you are falsely implicated, you did not raise this plea.”

Justice Trivedi intervened to say: “Have you given any (example of) judgments of high courts where the accused has been acquitted solely on the basis of validity of sanction without going into merits or reversing the finding on merits?”

Basant pleaded that the defence had argued the case on merit but the high court had chosen to pass the verdict solely over the issue of lack of sanction, for which the accused cannot be allowed to suffer imprisonment.

The bench remarked: “So, high court committed a mistake by not considering this and taking a shortcut, but can the benefit of that be available to the accused? We are only finding fault with the high court here.”

Basant said: “It was not a shortcut but a correct legal argument. It is fairly admitted that there is no sanction against me. I will point out certain circumstances which will persuade your Lordships to not suspend the sentence.

“I (Saibaba) am aged 55, I have a 23-year-old unmarried daughter in Delhi. Bail was granted twice and not once have I abused any of the conditions imposed. I am only trying to show why I should not be retained in custody.

“If this court thinks so, I can be ordered to be only inside the house. He (Saibaba) is in wheelchair and there is no one to even handle his calls of nature. Some co-jailed persons are helping him, and it is causing him stress. Let me preserve my health. Please let me remain in my house.”

Basant added: “The accused is physically disabled to the extent of 90 per cent. He has other multiple ailments, which is judicially accepted. The person is confined to a wheelchair and he is sick and infirm. (He has) no criminal antecedent.

“There may be ideological leanings. The solicitor-general said (Saibaba) was the brain involved (in the alleged nexus with Maoists) but there is no record of that.”

Justice Shah remarked: “For terrorism and Naxal activities, brain usage is more important than any other physical involvement.”

Solicitor-general Tushar Mehta, representing the state of Maharashtra, said: “There is a recent tendency among urban Naxals (of pleading) that ‘Please allow house arrests’. But everything can be done from within the home for them, even by phone. Please say that house arrest can never be an option.”

Mehta said: “The evidence and facts are very, very disturbing. He (Saibaba) supports the use of arms in throwing out the parliamentary form of democracy and encourages separatist actions in Jammu and Kashmir. All his actions are against the nation: attacking our security forces and even arranging a meeting of commanders of Naxalite forces.”

The apex court said it would examine important questions of law arising from the appeal:

*Whether an appellate court can reverse a conviction on the mere basis of there being an invalid sanction for prosecution.

*Whether, where a trial court has convicted the accused on the basis of evidence, the appellate court is justified in discharging the convicts on the ground of irregular sanction, particularly when the convicts did not raise the issue of sanction during trial.

*What should the consequences be of failing to disclose the factum of invalid sanction before the trial court even though the opportunity was given to the accused under Section 313 CrPC.

“Accused were convicted after detailed appreciation of evidence. Offences are very serious,” the bench said.

“The high court order is required to be considered in detail as it discharged the accused only on the ground that sanction was invalid and some material which was placed before the appropriate authority and sanction was granted on the same day.

“This court is of prima facie opinion that a detailed scrutiny is required with regard to the impugned judgment since the learned high court has not considered the merits of the case including the gravity of the offence alleged against him.

“The bail plea by accused was rejected by high court in 2020 even on medical grounds, which were pressed then as well. Hence, we are of the opinion that it is a fit case to… suspend the order of the high court.”