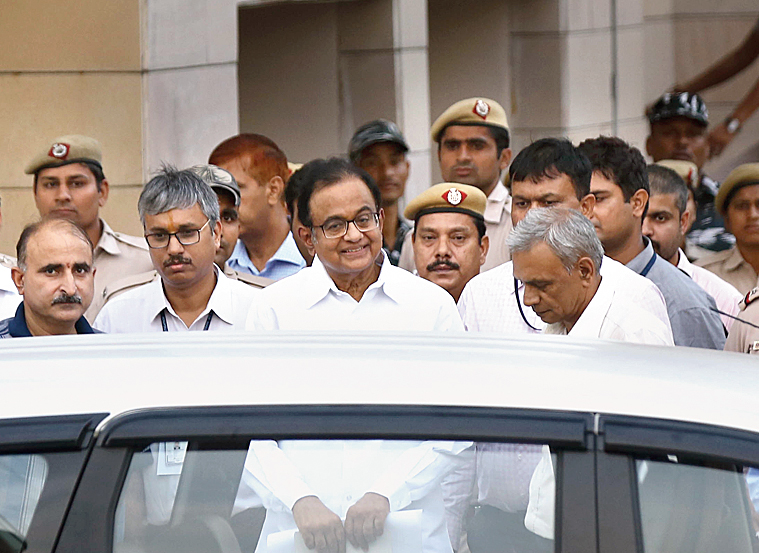 The Supreme Court on Monday granted P. Chidambaram three days of interim protection from “judicial remand” in the INX Media case but later modified the order slightly to post the matter for Tuesday after solicitor-general Tushar Mehta objected.

“…list the matter tomorrow i.e. 03.09.2019 at 02:00pm. The respondent-CBI is at liberty to move the CBI Court to seek police custody of the petitioner till tomorrow,” Justices R. Banumathi and A.S. Bopanna said in an order after the bench assembled again after the lunch break.

Earlier in the day, while hearing arguments around 1.30pm, the bench had declined to grant interim bail to the former Union finance minister as his senior counsel Kapil Sibal had sought.

The bench asked Sibal to approach the special CBI court for the relief after the lawyer contended that Chidambaram’s 15-day police (CBI) custody would end on Wednesday.

Sibal’s apprehension was that Chidambaram — arrested on August 21 night — might be sent to judicial custody once the CBI custody ended.

Under the law a person can be kept in police custody for a maximum of 15 days. Then the suspect is either sent to judicial custody or given bail by the court concerned.

Sibal’s contention was that since Chidambaram had challenged the correctness of his arrest by the CBI and the remand order passed by the special court, he should not be sent to judicial custody till the apex court had decided on the special leave petition (SLP) the former minister had filed.

Alternatively, Sibal said, his client was willing to be in CBI custody but not sent to jail custody, where suspects have to spend time with other inmates till they get regular bail.

Additional solicitor-general K.M. Natraj opposed the argument, saying the Criminal Procedure Code had no provision for placing a person under “house arrest”.

Natraj also said the plea for interim bail could be made only before the trial court.

Justice Banumathi, who was heading the bench, then asked Sibal to approach the trial court for interim bail. But the senior advocate persuaded the court to grant Chidambaram interim protection from judicial remand.

The bench then directed Sibal to approach the trial court for interim bail and asked the court to “pass (the) order today itself”.

In case the plea for interim bail or further police custody was rejected, the top court said, the CBI court “shall extend the interim police custody for three days” because of the SLP pending before the bench.

When the bench assembled again after lunch around 2.30pm, solicitor-general Tushar Mehta urged the court not to “upload the order” passed earlier in the day.

Mehta said it would cause a “jurisdictional problem” as Chidambaram’s CBI custody would in any case end on Tuesday.

He pointed out that since a person cannot be kept in the custody of an investigating agency for more than 15 days, Chidambaram could seek regular bail.

The CBI, he added, was willing to argue the matter further and requested the bench to hear the agency’s plea on Tuesday.

After initial reluctance the bench posted the matter for further hearing on Tuesday.

Judge Kuhar will on Tuesday hear the interim bail plea of the senior Congress leader, who was produced before the court.

Sibal had moved the interim bail application while the CBI sought extension of Chidambaram’s custodial interrogation by a day.

Solicitor-general Mehta sought time to reply to Chidambaram’s interim bail plea, and said a notice be issued to the CBI as it was required statutorily.

During the hearing, Mehta asked what was so special and extraordinary in this case. Senior advocate A.M. Singhvi, who also appeared for Chidambaram, said the solicitor-general would not have been there had it been a normal case.