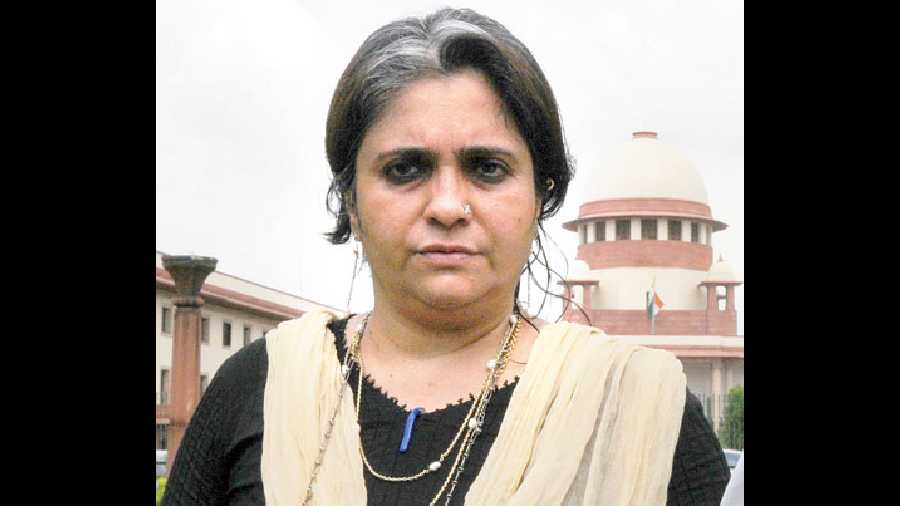 The Supreme Court Friday granted interim bail to social activist Teesta Setalvad, arrested on June 25 for allegedly fabricating evidence to frame "innocent people" in the 2002 Gujarat riots cases, a day after excoriating the Gujarat High Court over delayed listing of her bail prayer.

The top court also asked Setalvad to cooperate with the probe agency in the investigation of the case of alleged fabrication of evidence to frame people in riots cases.

Appellant, a lady has been in custody since June 25. The offences alleged against her pertain to year 2002 and going by assertions, at best the concerned documents date to 2012. The investigating machinery has had the advantage of her custodial interrogation of seven days followed by judicial custody, the bench said while granting interim bail to Setalvad.

Referring to the sequence of events of the case, the bench said the high court, while issuing the notice to the state government on the regular bail petition, should have considered the plea for grant of interim bail to her.

The essential ingredient of custodial interrogation being completed, the matter of interim bail should have been heard," it said, adding Setalvad was in police custody for seven days. The bench said since the high court is seized of the matter, it was not considering the regular bail petition.

"We are only on during the pendency of such application, should the custody of appellant be insisted upon or be granted interim bail. We grant Teesta Setalvad interim bail, it said.

The top court had on Thursday wanted to know the reason for the delayed listing of Setalvad's bail plea by the Gujarat High Court, wondering whether "this lady has been made an exception".

It wondered why the high court listed the bail prayer for hearing on September 19, six weeks after it sent a notice to the state government seeking a response to her application.

Referring to the case against Setalvad, which was registered days after the June 24 verdict of the apex court in the Zakia Jafri case, the bench said, Today as the case stands, the FIR is nothing but whatever has happened in the (supreme) court (judgement).

The bench was apparently referring to the verdict by the apex court bench led by Justice (since retired) AM Khanwilkar who had blamed the petitioners in the Zakia Zafri case for "keeping the pot boiling" and showing the "audacity" to question the integrity of the Special Investigation Team, and observed that "all those involved in such abuse of process need to be in the dock and proceeded with in accordance with law".

Setalvad was arrested on June 25, a day after the verdict was pronounced.

The Gujarat High Court had on August 3 issued a notice to the state government on the bail plea of Setalvad and fixed the matter for hearing on September 19.

The 2002 Gujarat riots were triggered by the torching of a coach of Sabarmati Express by a mob near Godhra station on February 27 that year.

Fifty-nine passengers, mostly Hindu Karsevaks returning from Ayodhya, were charred to death in the incident.

An Ahmedabad sessions court had on July 30 rejected the bail applications of Setalvad and former Gujarat Director General of Police R B Sreekumar in the case, saying their release will send a message to wrongdoers that a person can level allegations with impunity and get away with it.

Setalvad and Sreekumar have been accused of fabricating evidence to frame "innocent people" in the post-Godhra riots cases.

They are lodged in the Sabarmati central jail. Sreekumar has also moved the high court for bail.

Former IPS officer Sanjiv Bhatt, the third accused in the case, has not applied for bail. Bhatt was already in jail for another criminal matter when he was arrested in this case.

They were arrested by the Ahmedabad city crime branch in June after a First Information Report (FIR) was registered against them under Indian Penal Code sections 468 (forgery for cheating) and 194 (fabricating false evidence with intent to procure conviction for capital offences).

Mumbai-based Setalvad and Sreekumar were arrested within a couple of days after the Supreme Court dismissed Jafri's petition.