Advertisement
Home / India / State of the economy was the same during the elections. Nobody gave a damn: Yashwant Sinha

State of the economy was the same during the elections. Nobody gave a damn: Yashwant Sinha

He discusses his autobiography, Relentless, which reveals his experience with bureaucracy, diplomacy, the economy and politics 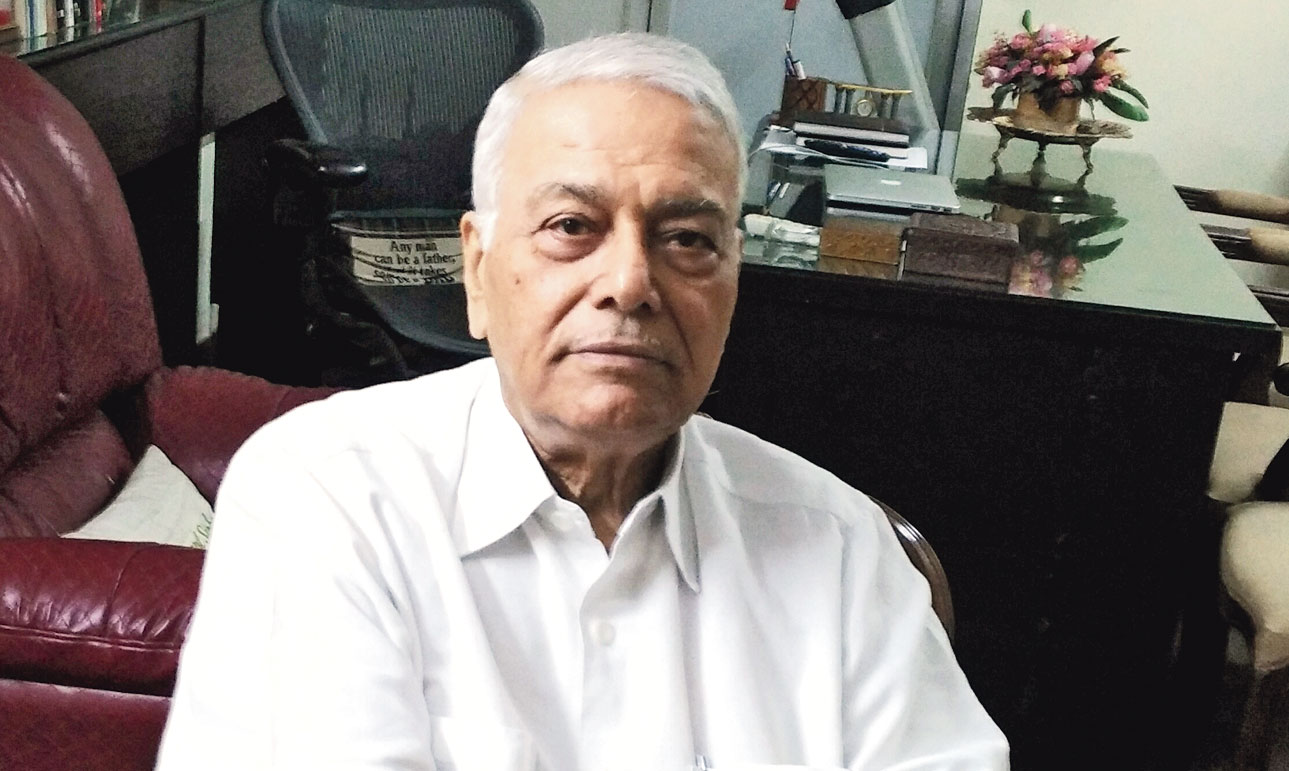 Yashwant Sinha, 81, has been a lecturer, IAS officer, author, MP, Union minister for finance and external affairs, and a perennial rebel. In an interview with Sanjay K. Jha, he discusses his autobiography, Relentless, which reveals his experience with bureaucracy, diplomacy, the economy and politics, offering an insight into contemporary challenges. In particular, he wants a return to paper ballots because of the widespread suspicion about the possible misuse of the electronic voting machines. Excerpts:

The point that strikes one while reading your autobiography is how education can transform the lives of people from humble backgrounds. You, like a few others such as Manmohan Singh, reached the top primarily because of education and hard work. What is your message to the youth?

Sinha: My message to the youth of today and all youth in every age is that they must try to excel in whatever they are doing. I also tell students that excellence without ethics is a body without a soul. So ethics must accompany excellence. The third is commitment.

While talking of personal lives, you say that love overcomes barriers. How do you see the political exploitation of the so-called “love jihad” today by a party you were once a part of?

Those who call it (a Muslim man courting or marrying a Hindu woman) “love jihad” intend to put the Muslim community at a disadvantage. Because it creates an impression that the Muslim community is interested in converting Hindu girls through marriage. Religion, caste and other barriers cannot come in the way of love.

You have recalled how you objected to a chief minister shouting at you. You told him, “I can become a chief minister someday but you can never become an IAS officer.” You indeed became a minister. What is the ideal relationship between a bureaucrat and a minister?

Sinha: I have devoted a chapter of this book on that subject. The relationship between a civil servant and a politician has not yet settled down. It is still in the making after over 70 years of Independence. It should settle down in a way that neither the politician nor the bureaucrat should suffer. I have suffered at both ends.

I was deputy commissioner and I always wondered why the chief minister shouted at me. I got the answer many years later when I entered politics. George Fernandes was contesting a bypoll in Banka (Bihar) and Ramakrishna Hegde, who was the chief minister of Karnataka, came to campaign for him. The SP (superintendent of police) came to receive him.

I raised before him (the officer) how the administration was helping the Congress candidate. Only our vehicles were being checked. I said this was not warranted by the Election Commission. He retorted, “Will you teach me the law?” What happens is that the bureaucracy snuggles up to the ruling party and ill-treats Opposition leaders.

What about those bureaucrats who recklessly indulge in illegality and corruption at the behest of, or in connivance with, ministers?

Sinha: They are the scum of the earth. They are third-rate people. I have absolutely no hesitation in saying that. But I also know they do not prosper. Their prosperity might be momentary but they suffer in the long term. I worked with a socialist chief minister, his rival, with Congress ministers and (with) Prime Ministers and always maintained my integrity and objectivity. I never had any problem.

After working with chief ministers and in the Union government as secretary, you were posted in Germany where, as you wrote, you learnt diplomacy and protocol. But you are so blunt; people trained as a bureaucrat and a politician do not speak the way you do.

Sinha: I was serving in Germany: they are blunt. If somebody is friendly, be friendly. But challenge the bully. There are many instances: I was negotiating with my Pakistani counterpart; I felt he was cheating. I said, “Are we here to cheat? Be candid.”

In a chapter explaining the election of V.P. Singh in violation of the decision in favour of Devi Lal for the post of Prime Minister, you say: “Consensus was replaced by conspiracy, dialogue with deceit and goodwill with guile.” Would the Janata Dal government have performed better under Devi Lal?

Sinha: That’s not the point I’m making. Hegde called a meeting in Bangalore. He invited four people: Ajit Singh, Arun Nehru, Sharad Yadav and me. I was representing Chandra Shekhar. All factions were represented and we wanted a system where consensus shall prevail.

It was decided that the five of us would take all the decisions. That consensus was destroyed that day in the Central Hall of Parliament. Even if Chandra Shekhar had contested against V.P. Singh, he would have lost. But there was no need to agree to Devi Lal and change the decision later. Chandra Shekhar was not taken into confidence.

You give an impression that Chandra Shekhar would have resolved the Ram temple issue, controlled militancy in Punjab and improved Indo-Pak relations, leading to a compromise on Kashmir, had he continued as Prime Minister for a year longer. Did Rajiv Gandhi commit a historic blunder by pulling down his government?

Sinha: He committed a historic blunder. And he also went back on his word by bringing down the government in four months. The other witness to this was the then President, R. Venkatraman. He has written in his memoirs that he was assured by Rajiv Gandhi that the Chandra Shekhar government would not be disturbed for one year at least.

Venkatraman knew the economy was in a very serious mess. We needed some stability. I was preparing a reform-oriented budget — which was later presented by Manmohan Singh — and Chandra Shekhar was very close to solving the Ayodhya issue. He had hit it off very well with Pakistani Prime Minister Nawaz Sharif. It was still the early days of the militancy in Jammu and Kashmir.

If Chandra Shekhar had solved these problems — this is where Rajiv Gandhi’s angst came. All of us understood that after a year, the Samajwadi Janata Party would merge with the Congress. Then the Congress would have majority in Parliament and Rajiv Gandhi could become Prime Minister. But I think Rajiv feared that if Chandra Shekhar solved these problems, he would be able to win the loyalty of the majority of Congress leaders and he (Rajiv) would lose out.

Are you suggesting that India would have been different today had Chandra Shekhar continued for a year as Prime Minister?

Sinha: Yes. There have been many moments in our history where the country would have taken a turn for the better if this, and not that, had happened.

You also write that in India, the economy is never central, politics is. How do you see this reality in today’s context?

Sinha: Today, it applies with greater force. We are all aware what the state of our economy is. It was the same when the (general) election took place early this year. But nobody gave a damn in the election. In politics, the messaging is most important. Mr (Narendra) Modi had a clear advantage over the rest. His message, not based on facts, reached the people and convinced them.

(In 1999) the Kargil war occupied the national attention for three-four months; the whole country was engrossed. The result was a signal victory for India. But the BJP couldn’t win one seat more because of the decisive victory. Here, one Balakot air strike — look what it did! What was it? Messaging.

You say your inability to do “chaaploosi” (sycophancy) puts you at a disadvantage in this “age of self-promotion, alternate facts and post-truth, of trolls and a managed media”. Has chaaploosi become an essential attribute today?

Sinha: It always has been, from Caesar’s time. Chaaploosi is an art. There are many worthies in the ruling party today who have no base of their own. If Modi were to drop him, or her, where would they be? They can’t win a municipal election despite holding high office. But they are the most important people not because of merit; merit doesn’t count, only chaaploosi.

Finally, you write that electronic voting machines should be discarded and ballot papers brought back. Why?

Sinha: EVMs have come into serious question. Have you seen any instance of buttons being pressed for the BJP and the vote going to the Congress or any other party? But haven’t there been cases reported about any button pressed ensuring a vote for the BJP?

The other point is, it’s wrong to say that booths can’t be captured in case of (the use of) EVMs. I have personal experience: in my constituency, three booths were captured by my rival.

Why is the Prime Minister not concerned about the suspicions?

Sinha: The basic issue is why the Election Commission is not concerned. They instead want a draconian law: that anybody not able to prove the charge (of a vote-paper slip mismatch) should be punished with a jail term. Draconian laws everywhere, hence for elections too.