Sonia reclaims Rao. A sign of stirring in rudderless Congress?

In recognising the past, yet allowing the future (Gehlot) an unbridled play, party president signals she hasn’t lost sense of realism 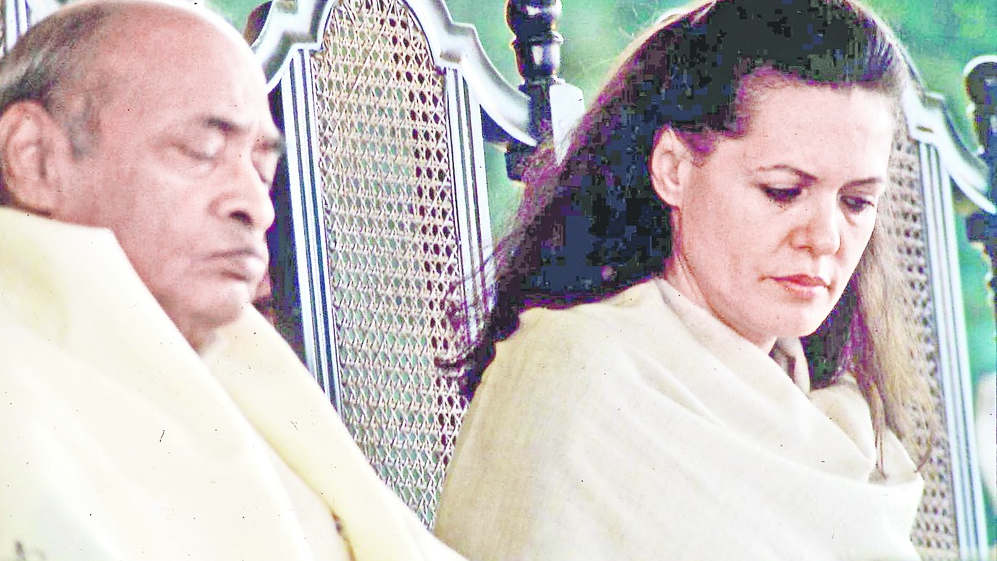 It was a sharp turnaround but one that wasn’t entirely unexpected. On Friday Sonia Gandhi heaped praise on former prime minister P. V. Narasimha Rao, triggering talk she is shaking off the drift and indecision that have overtaken the Congress ever since it lost the last election.

Sonia has sprung back into action to reclaim Rao after even relatively friendly political commentators savaged the Congress for its extreme lethargy and inability to stand up to the well-oiled BJP machine.

Sonia’s remarks read out at the virtual launch Friday by the Telangana Congress of year-long celebrations for Rao’s birth centenary represent the first moves by her to reclaim Rao and drive home the fact that he was a Congress prime minister and staunch Congressman all his life. Her sudden reversal on Rao came after difficult weeks for the Congress when the Rajasthan government came close to falling and political analysts blamed the Gandhi family for the party’s lack of fighting spirit.

The Gandhi family, “continues to treat the country’s oldest political party like a mom and pop store instead of a professional, modern organisation,” says columnist and media star Barkha Dutt, who is normally friendly to the Congress Party.

“It (the Congress) now resembles some Ruritanian court with a farcical cast of Queen Mother, Heir Apparent and Princess Royal,” says columnist Sunil Sethi who squarely blames the Gandhi family for the drift and mess in the Congress.

Columnist and former editor, Vir Sanghvi also doesn’t pull his punches, saying: “The party has just drifted along, rudderless, with no new internal elections being called. It is not clear what Rahul’s status is now, but mysteriously he appears to still call the shots and is still the face of the Congress’s opposition to the Modi government.

Amazingly, columnist Swapan Dasgupta, who is closely affiliated to the BJP, is the only political analyst who has held out any hope for the party, in a recent dissection of what has gone wrong with the Congress.

It’s been long said the Gandhi family has frozen out anyone in the party who doesn’t toe their line with servile obedience and that message has been driven home all the way down the party ranks. Just a few weeks ago, Congress spokesman Sanjay Jha was served a suspension notice after writing a column critical of the Gandhis in which he blamed the family for failing to let younger leaders emerge and the party’s shambolic attempts to fight the BJP.

It may be that the tidal wave of criticism in the wake of coming close to the edge in Rajasthan, a saga that’s not yet over, losing power in Madhya Pradesh and Karnataka has finally awoken Sonia to the party’s historically grave plight.

Significantly, it was the Telangana Rashtra Samithi (TRS), which is currently in power in Telangana, that launched the one-year celebration of Rao’s centenary year on what would have been his 99th birthday on June 28.  TRS leader K. Chandrasekhar Rao’s always been a strong fan of the former prime minister.

But there were signals that the Congress was ready to re-embrace Rao even on his 99th birthday. Former finance minister P. Chidambaram said at the time that Rao, “had friends, adversaries and critics, but no one can doubt his historic contribution to India. The governments of India, Telangana and Andhra Pradesh should celebrate his centenary year in a befitting manner.”

Sonia’s new warmness to Rao signals the Congress is ready to award Rao his rightful place in the party’s and the country’s history. The Congress can, after all, also ill-afford to let Rao be claimed by another party after the BJP’s moves to appropriate Sardar Patel as its own.

Now the question is whether recent events in Rajasthan and other states and last year’s humiliating general election defeat have focused Sonia’s mind sufficiently on the fact that she cannot allow the Congress to decline further.

While friendly media stars have been penning what could be seen as political obituaries for the Congress, it was left to the BJP-supporting Rajya Sabha member Swapan Dasgupta who pointed to the party’s strengths and said that it was much too early to write it off. Dasgupta argued, in The Telegraph Online, that the Congress had concluded the BJP had captured the imagination of under-35 voters and it needed to move fast to recapture this segment.

“To counter this, many Congress strategists argued there was no alternative to projecting Rahul Gandhi and his team of young inheritors,” he said. Dasgupta added: “They would, the argument went, present a more vibrant and wholesome face of the Congress and eclipse the old guard who had come to be associated with corruption and inefficient statism.

Even more importantly, Dasgupta argued that while the Gandhis were allowing the party to drift and this had led to its defeat in the general elections, the party was still strong in the states. As power drifted from the national leadership, it was still strong in the states. “Whether it is Captain Amarinder Singh in Punjab or Gehlot in Rajasthan, the command and control of the party has moved away from the High Command,” he argued, adding the party had lost the parliamentary elections since 2014 but has done better in Karnataka, Gujarat, Rajasthan, Chhattisgarh, Madhya Pradesh and Maharashtra.

If Dasgupta is right, it is too early to write off the Congress as a spent force. The crucial question is, though, whether the Gandhi family will either step out of the way or pull out all the stops to rebuild the party at the national level.

There is a third and a more intriguing possibility. The family will continue to remain the spiritual, and thereby, titular head of the organisation but will stay away from the grist and grime of the trench battles.

It was Sonia who rescued the Congress from ending up in what was mockingly expected to be the “dustbin of history” when she led the party to its 2004 storming victory. But 16 years is a long time in politics. In these years we’ve seen the emergence of new narratives in India and the world. Boris Johnson, Trump, Xi and our own Modi have all had their sails powered by the same wind. Globalisation has failed to contain the forces of nationalism.

Can micro-nationalism contain the forces of nationalism? Will Gehlot's success in Rajasthan sow seeds for the future? In recognising the past (Rao) and allowing the future (Gehlot) an unbridled play, Sonia is perhaps signalling that she has not lost her sense of realism.