He was called back and then beaten up, says father 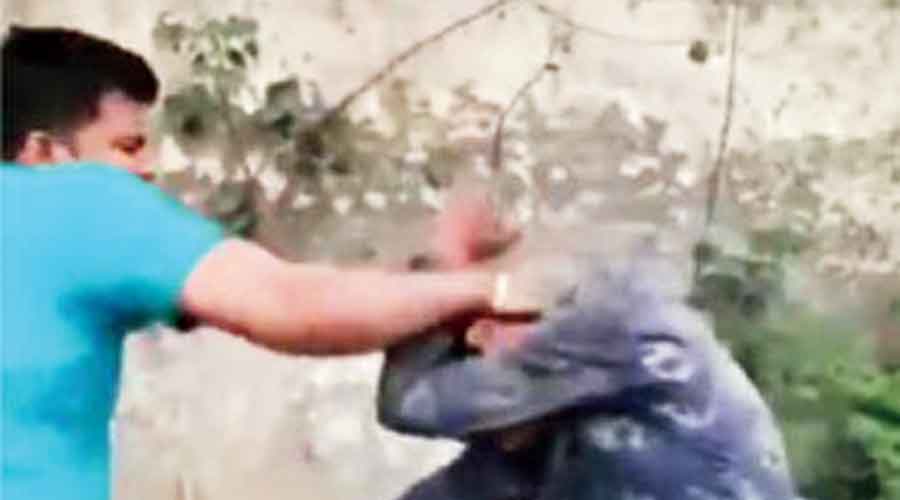 The father of a Muslim boy who was thrashed allegedly by caretakers of a popular temple near Delhi says his son is “very scared” and just “lies in bed” since Friday’s assault.

Two men have been arrested and charged with assaulting the 14-year-old, who was attacked after he said he had come to the Dasna Devi Mandir to drink water.

The accused allegedly filmed the assault — the images show a man stamping on the child’s face and upper thigh repeatedly — and uploaded the video on Instagram, boasting that a “Muslim terrorist” had been made “impotent”.

“I was at home when all this happened,” the father told The Telegraph from Dasna in Uttar Pradesh, 50km east of Delhi, where the family lives. “He is very scared and he just lies in bed now.”

A social worker who has met the boy said the child feared that if he stepped out, he would be beaten again because he is Muslim.

The temple's controversial mahant, Yati Narsinghanand Saraswati, had told this newspaper the boy had unnecessarily entered the temple despite the drinking-water tap being outside, and that the shrine had a sign prohibiting entry by Muslims.

But the boy’s father said his son had drunk water from the tap outside and was leaving when the alleged attackers called him back.

“The tap is at the gate of the temple. He says he drank water from it and was returning home, walking on the road, when two Pandits called him back,” the father said. “They asked him his name and his father’s name. Then they told him they would make a video with him, after which one of them thrashed him while the other recorded it.”

The boy has eight siblings who work as rag-pickers and day labourers to support the family as the father is in poor health.

On Saturday, the police had said the boy and his family were untraceable. However, after the boy had his statement recorded at Masuri police station in Ghaziabad district, the media were able to contact the family.

"After beating him up they (the accused) told him to get out. This happened around (Friday) noon. Two policemen found him and gave him first aid and bandaged his injuries, after which he returned home," the father said.

"Yesterday (Saturday) morning the police came to our home. They had his video on WhatsApp. I told them he had injured his head. They took my name and number and returned at 10pm and took me and my son to the police station.

"I'm illiterate, so I don't know what they were writing in the police station. They were mainly talking to my son. Then they took us for his medical test, gave us medicines and dropped us home."

The family is from Bulandshahr district of Uttar Pradesh.

Both accused are in judicial custody. The police say the man who beat the child is Shringi Nandan Yadav. The other accused has been identified as Swami.

Name matters for sip of water