A conversation on the deepening crisis in the economy, what’s to be done and where the perils lie 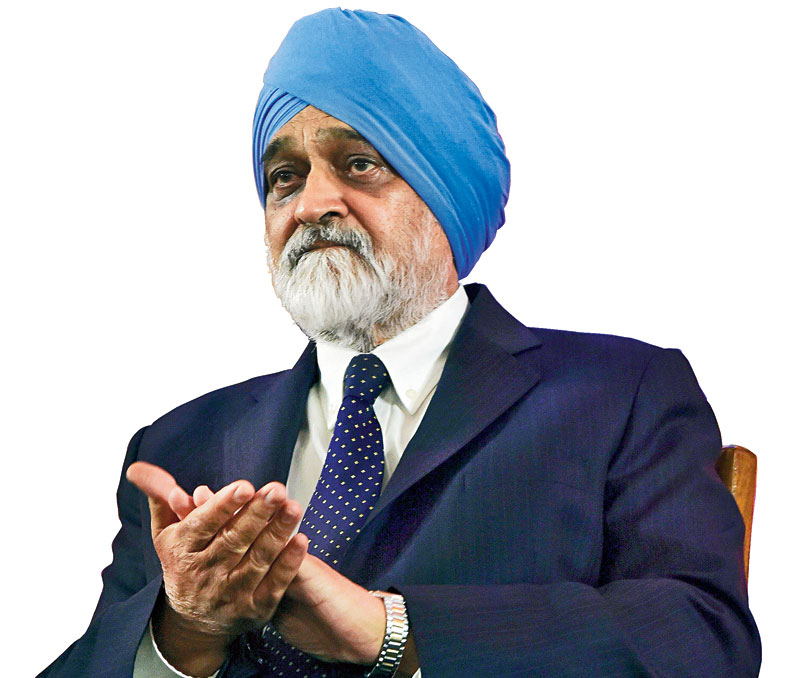 Former deputy chairperson of the erstwhile Planning Commission, Montek Singh Ahluwalia, at the launch of his book “Backstage: The Story Behind India’s High Growth Years”, at a function in New Delhi
PTI
Sankarshan Thakur   |   Published 22.02.20, 06:46 PM

There is an interesting reference in your book to a meeting with the Punjab delegation when you quoted Machiavelli’s comment that a disease is difficult to diagnose at an early stage but easy to cure, and at a later stage it becomes easy to diagnose but difficult to cure. As an economy where are we on that scale?

I am not sure the Machiavelli quote is relevant for the present economic situation. But let me offer my assessment. We are in the middle of a very serious slowdown. GDP growth for the last quarter for which we have data fell to 4.5 per cent. Some people say the economy has bottomed out, but this only means that growth in the next year will not be lower than 4.5 per cent. Independent observers project that GDP growth in 2019-20 will be below 5 per cent and for 2020-21, it will at best go up to 5.5 per cent or so.

This may look like a green shoot of recovery but it is very far from the targets we have set. My con-cern is not just about GDP growth. Unemployment is a huge problem especially for the young. It is a recipe for social unrest. We cannot expect to generate the jobs we need if the economy does not grow more rapidly.

What should we be aiming at?

The government has established a target of getting to a five trillion dollar economy by 2024-25. It is a good aspirational target but it can only be achieved if the economy grows at an average rate of about 9 per cent per year from 2019-20 onwards. We did grow at 8.4 per cent for the first seven years of the UPA but if growth in 2019-20 is below 5 per cent and it moves up to only 5.5 per cent in 2020-21, the economy would have to grow much faster than 9 per cent in the next four years. This is simply not feasible.

I wish the finance minister had admitted that we are off-target. She did not. If the government thinks they are firmly on track for the five trillion dollar economy, then of course they would be right to go on with business as usual. But we are definitely not on track and that is why we need to take corrective steps.

What can we hope for and how do we get it?

We need to get the economy back to 8 per cent growth as quickly as possible. This may take another three years. And we must work hard to bring in structural reforms that are needed at this time.

What are the reforms you would recommend?

Let me mention a few. First, we need to come clean on the size of the fiscal deficit. The CAG had pointed out that the accounting systems we are following end up understating the Centre’s fiscal deficit by as much as 2 percentage points of the GDP. Almost all financial commentators are aware of this and they would appreciate greater candour. There is no point in pretending that the fiscal deficit is on the track envisaged by the Fiscal Responsibility and Budget Management Act. It is actually much higher. A high deficit may not be a problem right now because there is a lack of demand and capacity is underutilised, but continuing such a high deficit is a major drag on the economy in the medium term. It leaves very little resources to support private investment. We need a medium-term plan to correct the fiscal deficit after measuring it correctly.

Second, we need to examine why private investment has been falling. Part of it is just a cyclical phenomenon of excess capacity but there are deeper problems holding back what are called “animal spirits”. Rahul Bajaj in a public forum raised the issue of what he called the “fear factor”. He did not elaborate, but part of the problem is that businessmen believe that the tax authorities and other regulatory agencies can easily get into a harassment mode. This dissuades businessmen from raising their problems frankly and in that environment the problems are unlikely to be solved. The fear of tax terrorism needs to be ended.

Third, we need to fix the banking system. There is no chance of getting 8 per cent growth if bank credit does not expand at a commensurate pace. The banking sector is still reeling under its NPA burden. We have known about this problem since 2014 but six years later we are still looking around for a solution. Meanwhile, bank credit growth in the public sector banks is very low. There is talk of banking sector reforms but very little action. I think fixing the banks must have top priority and we should look at innovative solutions. If we are not willing to take the government equity in public sector banks below 51 per cent we should at least implement the P.J. Nayak Committee recommendations. I have discussed this at length in my book.

Finally, I am deeply worried about exports. Indian export performance has been very poor with exports in dollar terms more or less stagnant over the past several years. And you can’t really blame the global economy because Vietnam and Bangladesh are doing very well. We need to ask what we can do to make exports perform better. In this context, I must say that the decision of the government to raise import duties is exactly the wrong thing to do, it hurts exports. If you look at the Economic Survey, it says that we should get into global value chains. The way to do that is to either get into various free trade agreements, or to lower import duties. We seem to be going in the opposite direction.

The protectionist turn in policy reverses a 30-year trend of gradually reducing import duties. This was initiated in the 1991 reforms and was continued by the United Front government. It was also continued by the Vajpayee government. Yashwant Sinha had said that our import duties should be brought down to the levels in Asean countries. The UPA, of course, continued the process. I thought the present government would maintain the same course because Arvind Panagariya, who was the first vice-chairman of the Niti Ayog, published a three- year policy agenda which envisaged lowering of duties and bringing duties to a common level of 7 per cent. That would have been a welcome move but what we are seeing now is a marked reversal.

Does the government talk to you on these matters — what’s wrong, what should be done, etcetera? Isn’t it natural if there is a crisis that the government would talk to this person who has been involved with economic decision-making for the last two decades, let’s see what he has to say. Isn’t that normal?

There are a lot of people that the government could turn to, but on these issues they could just look at what their own experts are saying.

I mentioned Arvind Panagariya’s recommendation on import duties. He is a distinguished trade economist and has brought out a report recommending a very sensible approach to lowering duties. So the right advice is there with the government.

What’s your sense of how decisions are being made now, how policy is being formed, how crises are being dealt with? Is there a governing eye, a process, or not?

I have no direct knowledge of the internal decision-making process today but I can tell you something that I have also reported in my book. When the big economic crisis of 2008 struck, Prime Minister Manmohan Singh did two things. Rather than leave matters just to the finance ministry, he set up an apex group which included several ministries, it included the governor of the Reserve Bank, it included me as deputy chairman of the Planning Commission, to take a collegial view of the crisis. More importantly, he asked me to get in touch with Raghuram Rajan, who had just left as chief economist of the IMF to return to Chicago, and seek a note from him on what the government should do. It is necessary sometimes to get advice even from outside rather than just say we know. When you leave things just to ministries the tendency for them is to say, we know. Recognition of a problem, wide discussion of a problem, rethinking of policy, these are necessary. We are dealing with many things today that are very complex and to think that the ministries themselves will take care of the problem is just not credible. You need expert input and you need to involve the private sector.

I completely agree. The social side cannot be viewed as different from the economy side. Not only is social harmony desirable in itself, it is also necessary for investment to flourish and generate growth. In an autocratic system dissent is more easily suppressed, but in a democratic environment it cannot be suppressed and this means it is important for the political leadership to work hard to create harmony.

That partly describes the difference between China and India, does it not?

Right. In China, they are quite proud of not having democratic norms because they believe they merely lead to dissent and chaos. And investors are also quite happy because they say, look, it is your country, your society, as long as you are keeping it calm, we don’t care. That cannot be the case in India. So governments have to look at keeping social harmony. If there is a problem, you must talk to the people and resolve it. Ignoring that is only risking more instability.

How do you see the CAA-NPR-NRC domino playing out here?

There are obviously apprehensions on what impact these initiatives will have on the Muslim minority and these apprehensions must be addressed. I personally do not think there is much to be gained from a national register of citizens. The costs and benefits of doing that need to be carefully evaluated. The real problem is that in a country like ours, 30 per cent of the population will not be able to provide the kind of documentation needed and therefore runs the risk of being excluded.

Could be even more, but remember that 30 per cent of the Indian population is almost 400 million people. Even if the government is well-intentioned, at the lower levels such an exercise can become the source of immense harassment. The apprehensions are not unreasonable and several states have also expressed reservations. It is clearly an issue that needs to be carefully considered and calm restored. Restoration of social harmony is essential if we want to create an environment in which investors will want to invest.