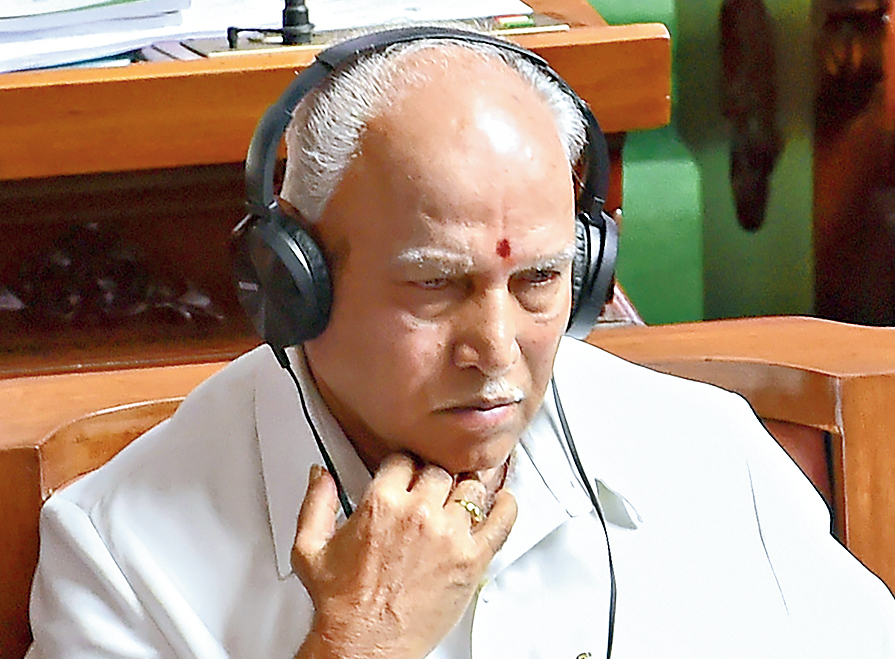 Karnataka will form a special investigation team to probe audiotapes that purportedly reveal a poaching bid on a government MLA by state BJP chief B.S. Yeddyurappa, who has admitted meeting the lawmaker’s son but says the tapes were “edited”.

Chief minister H.D. Kumaraswamy on Monday accepted Assembly Speaker Ramesh Kumar’s advice to form the SIT. Kumar, whose name features in the audio clips, wants the probe completed in 15 days so that he receives early “relief” from the stigma.

mobile phone to record a conversation during which Yeddyurappa allegedly promised Rs 25 crore and a ministry berth if his father switched sides.

Yeddyurappa had at first denied meeting the young man and promised to quit politics if the government could prove that the voice on the recording was his.

He did an about-turn on Sunday and admitted the meeting but claimed he had been trapped and that the context of the conversation had been edited out.

“It’s true that I met Sharanagouda. Kumaraswamy sent the MLA’s son to get me to talk and then edited the audio to their requirements,” Yeddyurappa said.

Kandakur Jr says the meeting happened at a guesthouse in Devadurga, Raichur district, in the presence of local BJP legislator Shivanagouda Nayak in the early hours of Friday. He and Kumaraswamy had played two tapes at a news conference on Friday, purportedly featuring Yeddyurappa and Nayak.

A male voice resembling Yeddyurappa’s claims in one of the tapes that the BJP has “booked” the Speaker by paying him Rs 50 crore to avert the disqualification of any MLA who defects from the ruling Congress-JDS combine.

Ramesh Kumar in the Karnataka Assembly on Monday.
(PTI)

With the state budget presented on Friday, the Speaker did not take up the tape controversy before the House adjourned for the weekend.

On Monday, he made an emotional address to the House and sought an SIT probe, brushing aside the BJP’s demand for an inquiry by a judicial commission or a House committee.

“I’m not in favour of a judicial commission since it’s a long-drawn process. For how long should I remain in this situation? So please give me relief in 15 days,” Kumar said, requesting the chief minister to fast-track the probe.

When the BJP suggested a House committee investigation, the Speaker said such panels cannot look into incidents that occur outside the Assembly.

While the BJP initially appeared to back the Speaker’s demand for a probe, it created a ruckus after Kumaraswamy said there would be an investigation by an SIT, which is a police team with a specific assignment.

“We have no faith in this government,” said BJP member J.C. Madhu Swamy, a Yeddyurappa loyalist.

On Sunday, however, Yeddyurappa had said he was ready to face “any inquiry”. On Monday, he sat through the House session with a glum face, rising just once to clarify he had already admitted meeting Kandakur Jr.

Kumar has clarified there “should be no witch-hunt” and the sole aim should be to “establish the truth”.