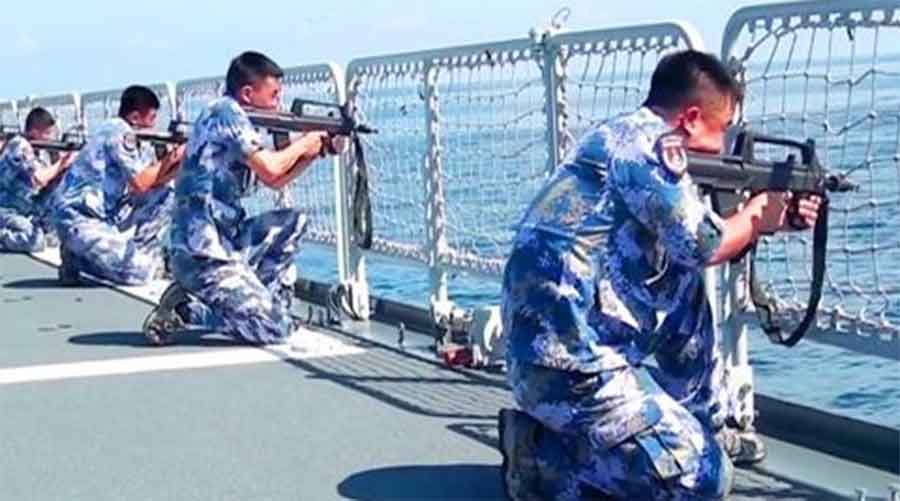 The Chinese Foreign Minister hoped that India will meet China halfway to move the situation towards stability and shift it from urgent dispute settlement to regular management and control.
File picture
K.J.M. Varma   |   Beijing   |   Published 17.09.21, 06:48 PM

China on Friday said it agrees with External Affairs Minister S Jaishankar's assertion that Beijing should not view its relations with India through the lens of a third country, saying that Sino-India relations have their own "intrinsic logic".

Jaishankar, who met his Chinese counterpart Wang Yi in Dushanbe, conveyed that the two sides should work for an early resolution of the remaining issues along the Line of Actual Control (LAC) in eastern Ladakh.

He also told the Chinese Foreign Minister that the two countries need to establish a relationship based on mutual respect for which it was necessary that China avoid viewing the ties with India from the perspective of its relations with third countries.

On Twitter, Jaishankar said: "It is also essential that China does not view its relations with India through the lens of a third country."

Asked for his reaction to Jaishankar's remarks, Chinese Foreign Ministry spokesman Zhao Lijian told a media briefing here that we agree with the remarks from the Indian side .

"China and India are both important Asian countries. For the two countries to develop relations there is an inherent necessary logic. China-India relations never target any third party," Zhao said.

In the statement issued by the Chinese Foreign Ministry, Wang noted that the recent communication between the two sides through the foreign and military departments was earnest and effective, and the overall situation in the border area was gradually de-escalated .

The Chinese Foreign Minister hoped that India will meet China halfway to move the situation towards stability and shift it from urgent dispute settlement to regular management and control.

"Both sides need to consolidate the disengagement results of the front-line troops, and strictly abide by the protocols and agreements and the consensus reached between the two countries, to jointly safeguard the peace and tranquility of the border area and prevent the recurrence of border-related issues," he said.

The border standoff between the Indian and Chinese militaries erupted on May 5 last year following a violent clash in the Pangong Lake area and both sides gradually enhanced their deployment by rushing in tens of thousands of soldiers as well as heavy weaponry.

In February, the two sides completed the withdrawal of troops and weapons from the north and south banks of the Pangong Lake in line with an agreement on disengagement.

Wang and Jaishankar had held a bilateral meeting on the sidelines of another conclave of the SCO in TajikistanDushanbe on July 14.

As two major emerging economies, China and India must continue to uphold the strategic consensus of being opportunities of development to each other rather than threats, push the bilateral relationship and practical cooperation onto a healthy and stable track , Wang said during Thursday's meeting.

It serves the common interests of the two countries and benefits regional and world peace and development, the Chinese foreign minister said.