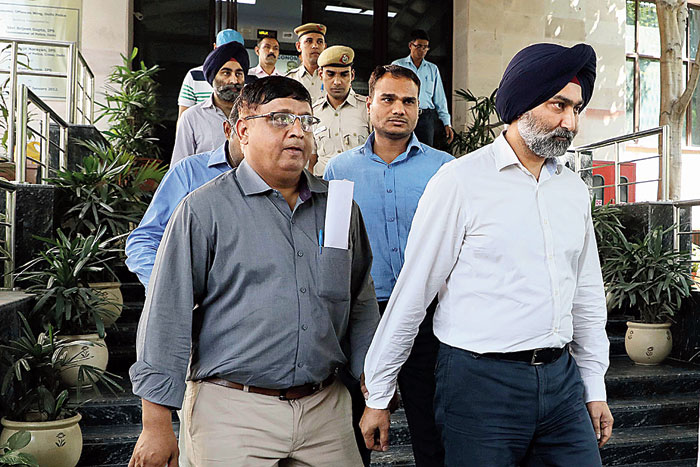 The Economic Offences Wing (EOW) of Delhi police told a court on Tuesday that Fortis Healthcare's former promoters Malvinder Singh and his brother Shivinder, arrested for allegedly misappropriating funds of Religare Finvest Ltd (RFL), have disclosed that an amount of about Rs 1,000 crore has been transferred to various persons from the entities linked to corporate loan book which was then allegedly siphoned off.

The submission was made before Chief Metropolitan Magistrate Deepak Sherawat who extended by two days the police custody of the Singh brothers and Sunil Godhwani, the former chairman and managing director of Religare Enterprises Ltd (REL).

All the three accused were produced before the court on Tuesday.

The investigating officer of the Delhi police, EOW, in the remand application, sought custodial interrogation of the accused for two days saying it was required to identify the persons to whom the alleged siphoned off money was transferred and to ascertain the purpose of creating the shell companies.

It said, 'during the course of investigation, it has been disclosed by the accused persons that an amount of approximately Rs 1,000 crore has been transferred to various persons from the entities linked to corporate loan book and finally it was siphoned off.'

The court said in its order, 'the application of investigating officer seeking two-day PC remand of the accused persons is allowed.'

Kavi Arora and Anil Saxena, who occupied important positions in REL and RFL, were also sent to two-day judicial custody. Arora also moved the court seeking bail which has been put up on October 17 for consideration.

The police's plea stated that custodial interrogation was required to confront the directors of the shell entities with the accused with respect to their association.

Counsel for Malvinder, advocate Manu Sharma, did not oppose the plea, saying investigation conducted so far has brought forth material which may also benefit the accused.

'In comparison to the previous remand application, we are happy by this plea. We are not vehemently opposing it. We are happy to assist the investigation,' he said.

Advocate Vijay Singh, appearing for Malvinder, further said that his client has already shown some links to the police with regard to where his money has gone.

Malvinder (46), Shivinder (44), Godhwani (58) and Arora (48) and Saxena, were arrested by the EOW for allegedly diverting the money and investing in other companies.

Senior advocate Vikas Pahwa, appearing for RFL's Manpreet Singh Suri, who filed the complaint in December last year, had earlier alleged that the case was a serious economic offence.

Religare has accused them of diverting funds, claiming that loans were taken by Shivinder while managing the firm but the money was invested in other companies.

The police had said that the accused have to be confronted with other officials to ascertain the role of co-conspirators and said that the money trail was to be found in the case which was at an initial stage of probe.

The counsel for Malvinder had earlier told the court that the money was with Radha Soami head Gurinder Singh Dhillon but the police was not going after him since he had political connections and that Malvinder was being made a soft target.

RFL is a subsidiary of the REL. Malvinder and Shivinder were earlier the promoters of REL.

The EOW had registered an FIR in March after it received a complaint from Suri against Shivinder, Godhwani and others alleging that loans were taken by them while managing the firm but the money was invested in other companies.

According to the police, the complainant stated that the four had absolute control on REL and its subsidiaries.

'They put RFL in poor financial condition by disbursing loans to companies having no financial standing and being controlled by them. The companies to which loans were disbursed willfully defaulted in repayments and caused a loss to RFL to the tune of Rs 2,397 crore,' police had alleged.