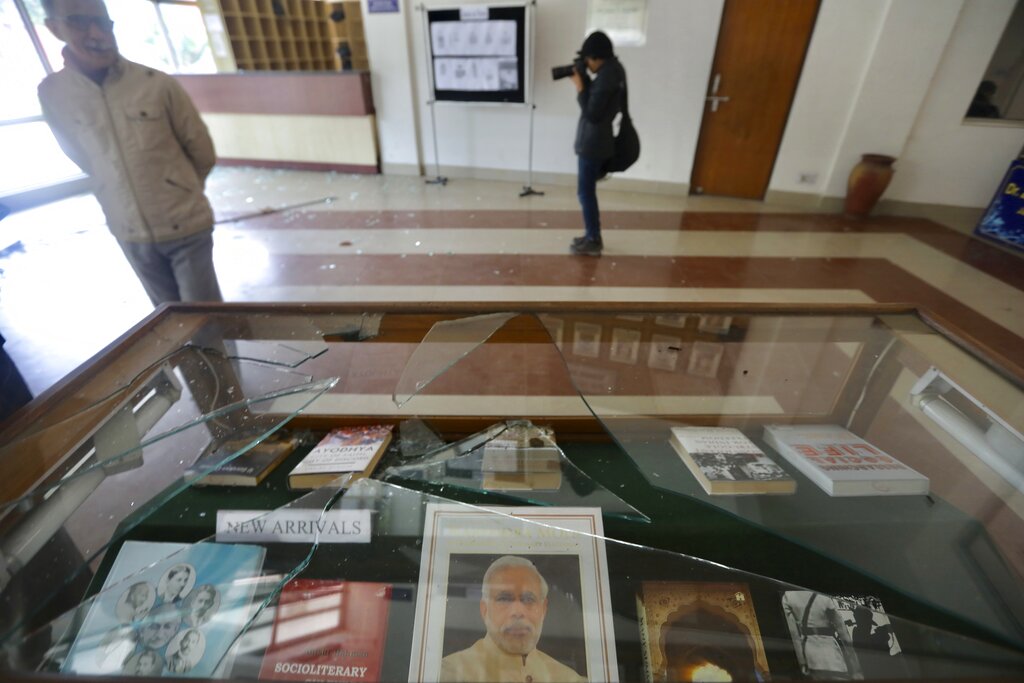 An image of the Prime Minister stares out of the cover of Narendra Modi: A Charismatic & Visionary Statesman, straight through the broken glass of the new-arrivals display at the Dr Zakir Husain Library.

A trail of glass shards shows the path police took in their quest for alleged stone-throwers on Sunday.

Horror tales of the raid tumbled out on Monday: the police had smashed the CCTV system before entering the library; they beat up campus guards; policemen thrashed both male and female students.

At the library, their first stop was the reading room. “The police barged in through the main door around 6.30pm. They shot tear smoke shells inside,” Adnan, a library employee who was working his shift, said.

“Other cops entered from the side door and overturned tables to block the exit route. They had motorcycle helmets on and began beating anyone in sight. We began choking on the fumes. The police came to hit me but a security guard told them I was staff.”

Tear smoke shells lay strewn across the room. Garments and bags lay under a small window, presumably shed by students in their quest to smash the panes and crawl out.

Some had fled to the upper floors and some to the toilet. Many were dragged out and beaten. Bloodstains were everywhere, especially the first floor. “It looks like Syria or Gaza,” MSc mathematics student Shoaib Ansari said.

Ansari was in a reading room in the Ibn Sina (old library) block nearby when the cops came. “Our eyes burnt with tear smoke fired from the gate. The security guards told us to run. At a spot near the (Husain) library, we saw police hitting our guards, who shouted: ‘Bhaago beta (Run, son)!’”

The Ibn Sina block too bore the trail of blood, glass, tear smoke shells, and books and bags left behind.

“We hid under furniture on the library’s top floor. Around 7.30pm, we heard mosque loudspeakers asking us to return to our rooms and maintain peace,” Ansari said.

“Some policemen came upstairs and told us to come out, saying we wouldn’t be harmed. When we did, we were all — boys and girls — beaten with lathis. All the police were male.”

Mohammed Jawed, a Jamia guard, said: “When the police barged in, we tried to tell them to wait. The procedure is that we inform our superiors before the police enter. They hit us with lathis, went to the guardroom and destroyed the electronic equipment (linked to the CCTVs). They then broke the CCTVs before entering the library.

“Afterwards, they tried to enter the mosque but the imam came out and refused. When they caught him by his neck, I said, ‘Leave him, he’s the imam’. The police caned me on my leg and arm. One of them shouted, ‘Tu Pakistan bhag ja (Flee to Pakistan)!’ They left after that.”

Two guards were badly injured. Several guards were allegedly thrashed inside the security office near Gate 8. Most Jamia guards, including Jawed, have served in the army.

Tear gas shells and a stun grenade were fired into another place of worship on the campus, where glass panes and a display board were broken. The university has cordoned it off to avert flare-ups.

Qari Mohammed Suleiman Qasmi, the aged imam of the mosque near the library, told The Telegraph: “Several children had taken shelter. There were some 30 women too, and a boy with a broken leg. When the police came around 7.30pm, I went to the gate and stopped them. Had they come in, there would have been mayhem….

“They gave me three whacks with a lathi. I take these as Allah’s blessings. I told the police I would call for peace from the loudspeaker. For an hour I did, while also appealing to the police not to beat the children.”

At a news conference on Monday, vice-chancellor Najma Akhtar said the varsity would demand a high-level inquiry and request the HRD minister “to look into the police’s entry and the damage to property and the students’ psyche”.

She said: “We will file an FIR against the police’s entry and action.”

No books have been destroyed. The varsity’s engineering wing is making an estimate of the damage, expected to be in lakhs.

The protests continued on Monday on the Maulana Mohammad Ali Jauhar Marg, which runs through the campus. Eastwards at Batla House, a police post lay abandoned after it was set ablaze on Sunday night. Half-burnt copies of the act lay all around.

Two Sikh men distributing tea among protesters refused to be named. “We are doing this for humanity, not publicity,” one of them said.

Hostel boarders walked out with suitcases from Gate 4 through the day. One of them, an MTech student from Gorakhpur, said: “I don’t want to leave but my parents are terrified.”

After stopping this reporter, one of them said: “There are forces there, and we don’t want a riot.”

Less than a kilometre away, scores of policemen in riot gear manned a barricade under the Sukhdev Vihar Metro station. Midway between the protesters and the police lay large pipes blocking the road ---- marking two worlds apart.