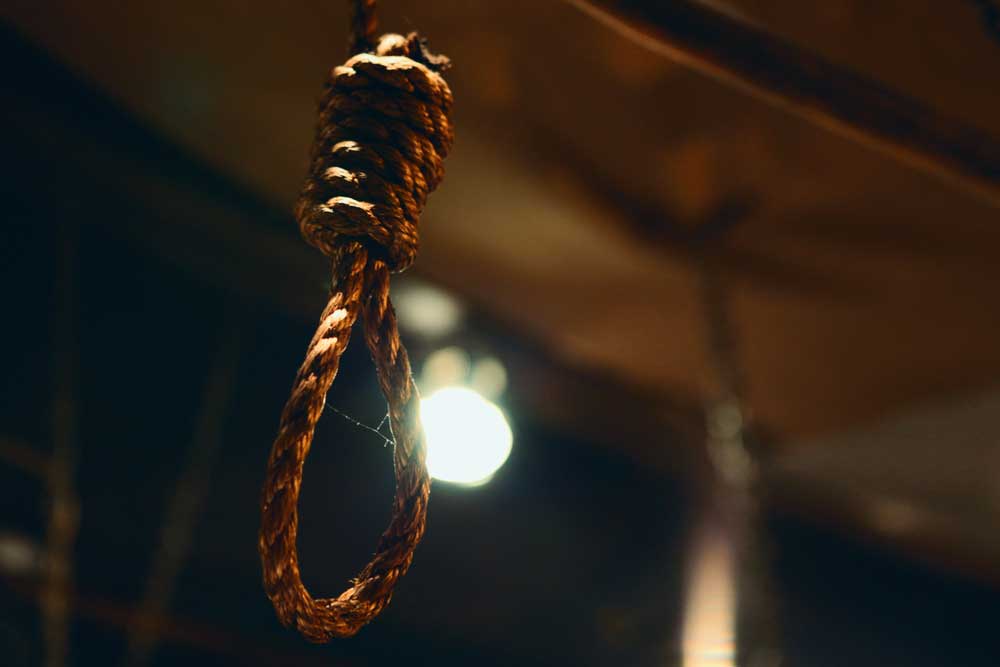 The body of Aldrin Lyngdoh, 22, from Shillong was found by a police team that was verifying a purported suicide note posted by the youth on WhatsApp a day earlier and forwarded to Uttar Pradesh law-enforcement by a top officer in Meghalaya.
(Shutterstock)
Piyush Srivastava   |   Lucknow   |   Published 31.03.20, 06:53 PM

A young man from the Northeast was found hanging on Tuesday morning on the terrace of an Agra restaurant where he once worked and which is owned by the relative of an Uttar Pradesh minister.

The body of Aldrin Lyngdoh, 22, from Shillong was found by a police team that was verifying a purported suicide note posted by the youth on WhatsApp a day earlier and forwarded to Uttar Pradesh law-enforcement by a top officer in Meghalaya.

The purported suicide note said the owner of the restaurant told Lyngdoh to “leave the place”.

The purported note said that “she (the owner) thinks she can do anything because her father-in-law is a minister”.

Chaudhary Udaybhan Singh, minister of state for khadi and gramodyog, whose daughter-in-law Seema Chaudhary runs the restaurant, told The Telegraph on Tuesday: “He (Lyngdoh) was alcoholic and had fallen sick a few months ago. We took him to a doctor who diagnosed that he was suffering from tuberculosis. We helped him but couldn’t let him work in the restaurant. He later left the city.”

The BJP leader and Fatehpur Sikri MLA added: “We don’t know how he reached here and climbed the terrace as the restaurant has been locked from the day the (Covid-19) lockdown started (on March 25). Only an investigation can give us the answer.”

The restaurant, Shanti Food Court, is in Sikandara, where the tomb of Akbar the Great is located.

Lyngdoh’s relatives could not be contacted in Meghalaya for comment. The office of the Meghalaya chief minister, Conrad Sangma, took to Facebook to seek help in identifying Lyngdoh’s family members. “We are trying to locate the family members of Aldrin Lyngdoh who was working in Agra, Uttar Pradesh. If you have any information, kindly send us a message in our inbox,” the post read.

Police sources in Uttar Pradesh said Lyngdoh sent the WhatsApp post on Monday evening to IPS officer and special commissioner of police, Delhi, Robin Hibu, who is from the Northeast. Hibu shared it with Idashisha Nongrang, additional director-general of police in Meghalaya.

Nongrang then forwarded it to Ajay Anand, additional director-general of police, Agra zone, who asked Agra additional superintendent of police Saurabh Dixit to visit the restaurant.

Dixit said Lyngdoh was found hanging from the ceiling of a tin shed on the terrace.

The police read out the purported suicide note written in broken English.

“I am Aldrin Lyngdoh. I was born in a poor family. My mother-father had dead. I had left home to do something. I wanted to change my life. I was working at Shanti Food Court restaurant near Kargil Petrol Pump crossing in Agra. It was closed and I couldn’t go anywhere.

“The owner of the restaurant didn’t show any sympathy to me. She told me to leave the place. I requested her for help but she refused me. I couldn’t go anywhere. I had no other way than committing suicide.”

The note also appeared to address the restaurant owner. “I want only one help from you. If you have any humanity, please send my body to my town. I will be at peace there,” the note said, according to the police.

“Do this much in the name of god because I wouldn’t be alive today. I am not kidding. She thinks she can do anything because her father-in-law is a minister,” the note added.

The last sentence appears to have been meant for the acquaintance (IPS officer Hibu) he sent the note to.

Dixit said the minister’s family had told the police the youth had been arrested in the past by Sikandara police in a theft case and sent to jail.

“Lyngdoh was suffering from tuberculosis when he was released on bail six months ago. Then he had gone to Delhi. He returned to Agra the day the nationwide lockdown was announced. He had met other employees of the restaurant but didn’t get any job here because the restaurant was closed. He climbed the terrace somehow and committed suicide there,” the officer told reporters.

“We are cross-checking the claims of the family and the call details of the youth to find out his location in recent days and weeks.”

Dixit, the additional superintendent of police, said Lyngdoh’s acquaintance shared the post with Nongrang but didn’t clarify when Anand received the forwarded message or when the youth hanged himself.

In Varanasi, some labourers from Madhya Pradesh who had been working and living in an under-construction building in the city’s Nasipur area, called the police control room on Monday to complain that the owner was forcing them to vacate the premises.

“Two policemen came here today (Tuesday) morning and met the owner of the building and asked him not to force us away. We are six men, five women and seven children. A social worker is providing us food packets. We want the owner to pay us our one month’s wage so that we can go home as soon as the lockdown is discontinued,” Nonelal Chaudhary, one of the labourers, told this newspaper over the phone.

Ashok Kumar, a police officer, said the owner had been told legal action would be initiated against him if he didn’t pay the wage and tried to evict the labourers