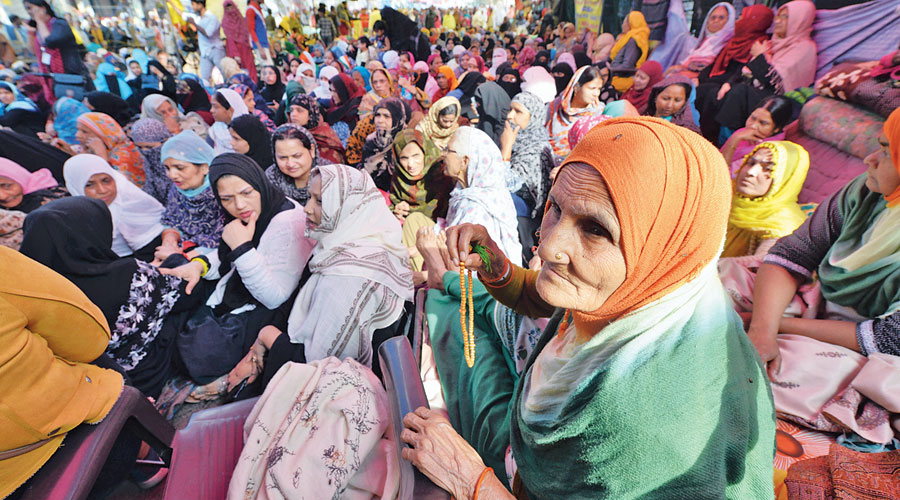 Demonstrators protest against CAA and NRC at Shaheen Bagh in New Delhi in February
File picture
Our Legal Correspondent   |   New Delhi   |   Published 17.11.20, 03:45 AM

A group of people who were among the Shaheen Bagh protesters against the Citizenship Amendment Act 2019 on Monday urged the Supreme Court to review its judgment of October 7 that such protests can be held only at “designated” areas, arguing that such a direction will “lead to abuse of authority by the government”.

“Prima facie the observations of this Hon’ble Court in the order under review appear to be giving way to an unrestricted sanction to the police to take action by misusing these observations. This is all the more troublesome when the police has in the recent past acted arbitrarily by beating students and protesters. The above observations, it is submitted, have clothed the police with an arbitrary discretion to attack any peaceful protester,” the review petition, which is yet to be listed for hearing, stated.

According to the petition, the only way for citizens in a democracy to show their dissent towards legislations, policies and other governmental acts and omissions is by way of peaceful protests. So to put any kind of curb on this freedom to show dissent leaves the citizens with no resort whatsoever to voice their concerns.

“…Propositions like holding protests at ‘designated places alone’ coming from judicial pronouncements shall upset the very concept of dissent and protest. In case of administrative action coming up with such propositions, the citizens still may approach the courts of law. However, in the present situation, the citizens are vulnerable and helpless. This is an obvious error on the face of it which requires review,” the petition said.

According to the petitioners, the impugned judgment also sought to vest extraordinary powers on the police and political representatives to hold negotiations with the protesters which it said would be counter-productive as the authorities would never go against government’s policies.

“Protests of this nature ought not to be subjected to the atrocities at the hands of a muscular administration which has targeted vulnerable citizens of this country wherever any peaceful protest have become politically inconvenient to the elected representatives in power.

“In a liberal democracy, questions of serious importance such as the threat to a person’s citizenship cannot be confined to the mercy of political representatives without the protesters having a reasonable choice of location to protest so that their voice may be heard effectively,” the protesters in their joint petition said.

The petitioners submitted that the impugned judgment is contrary to a 1972 five-judge constitution bench ruling in  the Himat Lal Shah case that there cannot be any excessive restrictions on public protests in a democracy.

It quoted paragraph 70 of the said constitution bench judgment wherein it was observed: “Public meeting in open spaces and public streets forms part of the tradition of our national life. In the pre-Independence days such meetings have been held in open space and public streets and the people have come to regard it as a part of their privileges and immunities. The State and the local authority have a virtual monopoly of every open space at which an outdoor meeting can be held. If therefore, the State or municipality can constitutionally close both its streets and its parks entirely to public meetings, the practical result would be that it would be impossible to hold any open-air meetings in any large city… streets.

“…Public parks existing primarily for other purposes and the social interests promoted by untrammeled exercise of freedom of utterance and assembly in public street must yield to social interest which prohibition and regulation of speech are designed to protect. But there is a constitutional difference between reasonable regulation and arbitrary exclusions…”

Hence it urged the apex court to review its recent judgment.