Hailing the apex court's decision, CID officer Shanti Das says every adult woman should have the right to choose her profession 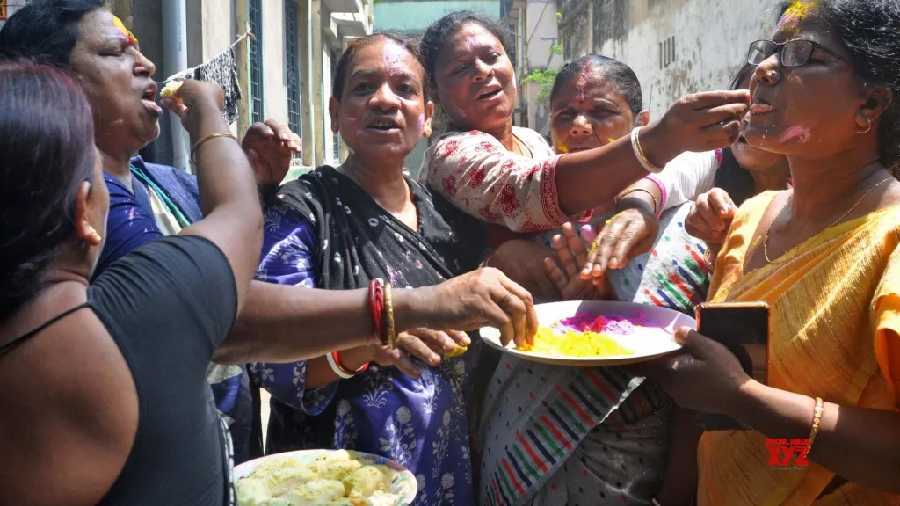 Coloured powder was smeared on faces and sweets distributed, with sex workers terming the court order as a step ahead towards a life of dignity
Twitter
Our Bureau, PTI   |   Calcutta   |   Published 27.05.22, 06:29 PM

Winding by-lanes and the narrow streets of Calcutta's Sonagachi, one of the largest red-light districts in Asia, came alive amid music and merry-making on Friday as sex workers rejoiced over the recent Supreme Court verdict that recognised prostitution as a profession.

Coloured powder was smeared on faces and sweets distributed, with sex workers terming the court order as a step ahead towards a life of dignity.

Mahasweta Mukherjee, advocacy officer of Durbar Mahila Samanwaya Committee, an NGO looking after the welfare of sex workers, said that the organisation's "27 years of struggle has finally borne fruit".

"We had two programmes lined up for the day to celebrate the historic verdict. Women in Sonagachi played with coloured powder and fed sweets to one another in the morning. In the evening, a programme has been arranged to raise menstrual hygiene awareness, keeping in mind that tomorrow is World Menstrual Hygiene Day. Napkins would be distributed on the occasion."

Mukherjee, however, noted that brothels are still held unlawful by the court.

Bisakha Laskar, a 44-year-old sex worker and president of the committee, said that the apex court ruling would bring relief to many women, who are regularly harassed for choosing prostitution as their profession.

"Not just some of us, the clients, too are heckled by policemen as they walk out of Sonagachi. I am hoping that this verdict would be a step towards a dignified life for us, "Laskar said.

Observing that human decency and dignity extend to sex workers and their children, the Supreme Court has directed police forces in all states and Union territories to treat them with dignity and not abuse them, verbally or physically.

The court also said sex workers should not be arrested or penalized or harassed during raids on brothels, since voluntary sex work is not illegal and only running the brothel is unlawful .

It ruled that a sex worker's child should not be separated from the mother merely on grounds that she is involved in prostitution.

Sangeeta Pal, daughter of a sex worker, said that they have long been looked down upon, despite not being at fault in any way.

None can impose their decisions on sex workers. They can voice their opinion if needed. Mothers engaged with the profession as well as their children would no longer have to stay apart. That said, the judiciary recognising the verdict and the society accepting us are two different things. It is a long battle, we have just taken one step ahead, she asserted.

Hailing the court's decision, Shanti Das, additional superintendent of police (CID), maintained that every adult woman should have the right to choose their profession.

This verdict should have come long ago, she stressed.

Asked about the allegations of harassment by the police, she said that raids are conducted when the police come to know that some minors are being exploited. "Also, the profession cannot be practised just about anywhere, on any premises. Families living near red-light areas often file complaints. Police in such cases need to look into their grievances, too," she added.