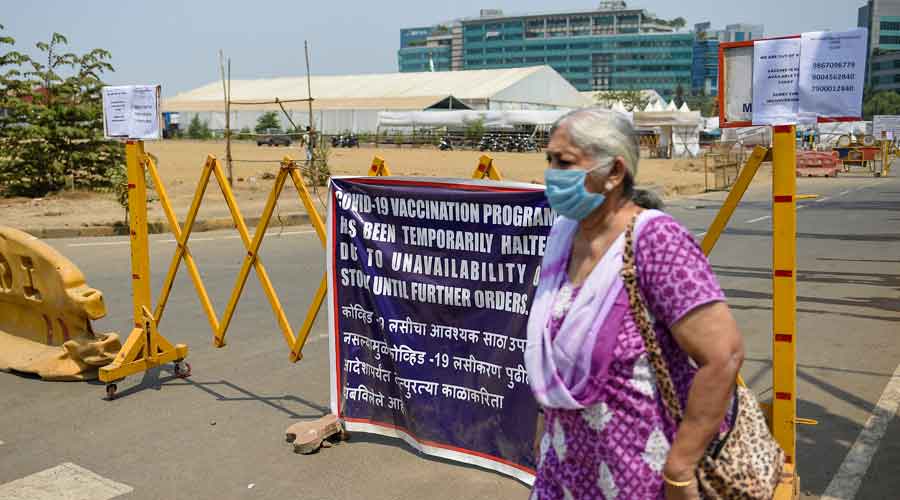 A woman stands behind a barrier outside a vaccination centre as vaccination stopped due to shortage of supplies in Mumbai
PTI
Vivek Nair   |   Mumbai   |   Published 29.04.21, 01:45 AM

The Serum Institute of India has cut its offer price for states from Rs 400 per dose of vaccine to Rs 300, projecting it as a “philanthropic gesture” amid outrage at what is being seen as profiteering from a pandemic that is devastating the country.

“As a philanthropic gesture on behalf of Serum Institute India, I hereby reduce the price to the states from Rs 400 to Rs 300 per dose, effective immediately; this will save thousands of crores of state funds going forward. This will enable more vaccinations and save countless lives,” Adar Poonawalla, chief executive of Pune-based Serum Institute, said in a tweet on Wednesday.

Different prices for the same vaccine — Rs 150 per dose for the Centre, Rs 400 for the states and Rs 600 for private hospitals — had earned the world’s largest vaccine maker bad publicity.

Bharat Biotech, the other vaccine maker, has announced far higher prices for the states and private hospitals — Rs 600 and Rs 1,200, respectively — than the Rs 150 per dose for the Centre.

The Congress has alleged that the vaccine makers are profiteering and will make Rs 1.11 lakh crore.

A PIL in Bombay High Court has sought a directive to the vaccine makers to sell at a uniform rate of Rs 150 per dose. Filed by advocate Fayzan Khan and three law students, it argues the vaccine is an essential commodity and its management and distribution cannot be left to private companies.

The Narendra Modi government had this month said that starting May 1, states could inoculate adults aged between 18 and 45 or people in this age group could pay and get vaccinated at private hospitals, abandoning its own responsibility to immunise all Indians.

States and private hospitals would have to procure their own vaccines at prices that would be fixed by the vaccine makers, it said.

While the vaccination of those over 45 for which the Centre is buying the doses would continue at government outlets, it would cease at private hospitals from May 1. The announcement has already caused chaos, with people whose second dose was scheduled at private clinics in May rushing to get it early for fear that they might not get it at all. The result has been long queues at overcrowded vaccination centres, raising the risk of catching the virus.

Experts foresee more trouble from May 1 when the 18-45 age group becomes eligible to seek the vaccine because supply will fall far short of demand.

Maharashtra health minister Rajesh Tope on Wednesday cited the vaccine shortage to say the state would not open vaccination for the 18-45 age group on May 1. The state said it needed 12 crore vials to inoculate around 5.7 crore people in this bracket. Serum has told the state government it will be able to supply the vaccines only after May 20, sources said.

More than 19 states are reported to have started negotiations with Serum for supplies.

Analysts at Jefferies, a brokerage firm, have said in a report that vaccine supply bottlenecks are expected to continue till the end of June and that India would have quantities to vaccinate only 56 per cent of its population by the end of this year.

Universal vaccination is seen as the only measure that can halt the pandemic rampaging through India. Less than 2 per cent of the population has been fully vaccinated so far. The Centre has been criticised for failing to place advance orders that would have ensured a steady supply, shifting the responsibility of immunisation to the states and then allowing vaccine makers to charge a higher price from the states.

Even after Wednesday’s price cut, Serum’s price for the states remains double of what it is offering the Centre.

Poonawalla had justified the different prices claiming that the price for the Centre had been set under a contract signed last year when the efficacy of the vaccine had not been clearly established. The Centre too will be charged the same rate as the states after Serum completes supplies of about 100 million doses under the bulk contract, he had added. Serum has not spelt out when that will happen.

The vaccine maker has not reduced the price of Rs 600 per dose for private hospitals.

In a Delhi apartment, waiting to catch Covid