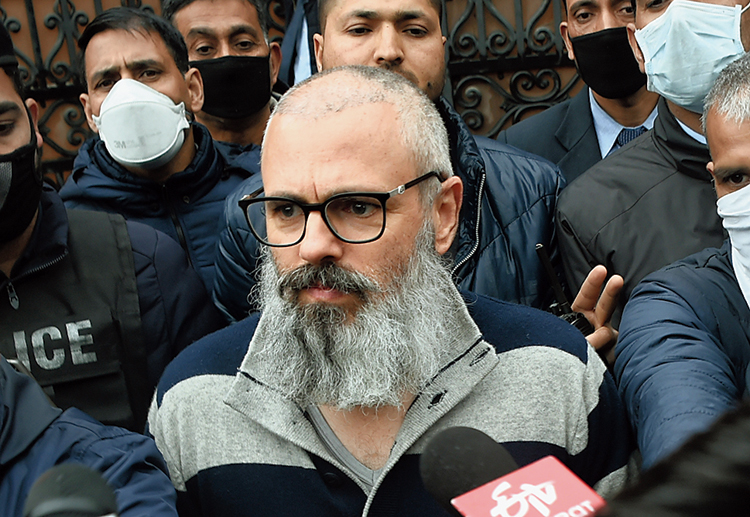 Omar’s call for statehood and elections triggered angry reactions, many suggesting he had been released after striking a “deal” with Delhi.
Telegraph picture
Muzaffar Raina   |   Srinagar   |   Published 04.04.20, 09:59 PM

Former chief minister Omar Abdullah on Saturday called for elections and the restoration of Jammu and Kashmir’s statehood but was silent on the revival of its special status, fuelling speculation that he had sold out to Delhi.

Following an uproar, Omar, vice-president of the National Conference which has traditionally backed the special status, said he had committed a mistake by “being sucked into this debate” at the wrong time.

He added that he would reveal his thoughts about August 5, 2019 — when Jammu and Kashmir lost its special status and statehood and came under a lockdown — at an appropriate time.

Omar’s initial statement had come in response to Friday night’s amendment by the Centre to its new domicile law for Jammu and Kashmir.

Originally, all government jobs in Jammu and Kashmir were reserved for the region’s permanent residents. On Monday, the Centre threw all the posts open for all Indians — the higher posts for all without qualification and the lower posts for “domiciles”, that is, any Indian who has resided in the region for at least 15 years.

On Friday night, the Centre climbed down and reserved all the jobs for the domiciles, bowing mainly to the anger of the BJP’s core constituency in Jammu rather than the outcry in the Valley.

While the National Conference termed the amendment “cosmetic”, saying it would still change Jammu and Kashmir’s demography and rob the local people of their jobs, Omar expressed his own views in a tweet. “It’s high time the people of J&K get to decide the laws that will govern them rather than being subjected to the whims & fancies of the Centre where orders are issued in the morning & changes to the same order issued in the evening. Restore statehood, conduct elections. #Democracy,” he said.

Omar had recently been released after seven months in captivity. He had pledged to remain silent on politics until the Covid-19 crisis had blown over. He, however, broke his promise on Wednesday, saying the Centre’s new domicile law had added insult to the people’s injuries.

Omar’s call for statehood and elections triggered angry reactions, many suggesting he had been released after striking a “deal” with Delhi.

“Your incarceration angered & pained many including myself thinking that one day you will get released to lead the fight against the grave injustice forced upon the people. Sadly you’ve proven that elections & CM’s chair is all that you aspire for,” a Twitter user wrote.

Hours later, Omar tweeted: “Delhi made a mistake notifying the domicile rules during this time of crisis & I made a mistake getting sucked in to this debate at a time when it’s wrong to let politics distract from the #COVID19 fight. I haven’t spoken my mind about 5/8/2019 yet but I will when this is over.”

He added: “For the time being, regardless of the provocation, I’ll focus on the battle at hand. Twitter is anyway the wrong place to talk about what I feel about 5/8/2019 until I’m able to find a platform for a detailed explanation of thoughts/feelings/plans.”