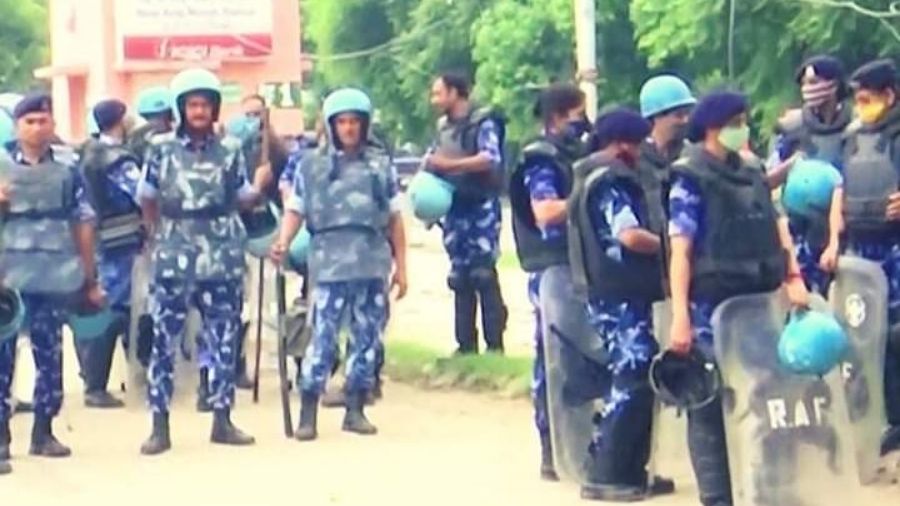 An 11-member delegation of farmer leaders was invited to hold talks with the district administration here on Tuesday as protesters in large numbers assembled for a mahapanchayat and later planned to gherao the district headquarters.

These senior leaders will be part of the talks with the administration and have said that they will raise various demands during the interaction. "We are talking to a delegation of farmers, Karnal Deputy Commissioner Nishant Kumar Yadav told PTI over phone.

Officials said details of the meeting will be shared later.

Meanwhile, security arrangements have been beefed up in Karnal as the farmers have planned to gherao the mini-secretariat here.

There is heavy deployment of Haryana Police as well as central forces in Karnal, while security forces in adequate strength have also been deployed at the new Anaj Mandi here where farmers are holding the mahapanchayat and plan to move towards the mini-secretariat, they said.

Officials said vehicular traffic on the Delhi-Karnal-Ambala National highway was plying normally in the morning.

Haryana Bharatiya Kisan Union (Chaduni) chief Gurnam Singh Chaduni had earlier in the day appealed to the farmers to assemble at the Anaj Mandi in a peaceful manner.

Next course of action will be decided at the mahapanchayat, Chaduni had said in a video message.

However, a statement issued by Haryana Police and Karnal district administration said some people had reached the new Anaj Mandi armed with lathis and iron rods, which does not show good intention on their part.

Ground intelligence reports indicate that some elements from Rambha, some from Nissing and some from other places have reached the Anaj Mandi armed with lathis, iron rods, which does not show good intention on their part, according to the statement.

The statement said police and district administration have spoken to farmer leaders who have tried to persuade such elements to leave the venue, but they are not listening to their leaders.

Karnal district administration and police is warning such mischievous elements not to take the law into their hands and maintain public order. All such elements will be strictly dealt with in accordance with law, it said.

Senior police officials have been put on duty at the new Anaj Mandi. There is also heavy barricading and deployment of security forces at the mini-secretariat.

A day ahead of the proposed gherao of the mini-secretariat by the farmers, central forces were deployed, mobile internet services suspended and prohibitory orders banning gathering of people were imposed.

The Haryana government, which had earlier ordered suspension of mobile internet services here from Monday 12:30 pm to Tuesday midnight, decided to suspend these services in four adjoining districts -- Kurukshetra, Kaithal, Jind and Panipat districts with effect from 12 am to 11:59 pm on Tuesday.

Forty companies of security personnel, including 10 companies of central armed police forces, have been deployed in Karnal district where local authorities have also imposed prohibitory orders under section 144 of the CrPC, officials said.

The SKM, an umbrella body of farmer outfits protesting against the farm laws, had threatened to lay siege to the Karnal district headquarters on Tuesday if its demands were not met.

The Haryana Police had lathicharged a group of farmers disrupting traffic movement on a national highway near here on August 28 while heading towards Karnal to protest against a BJP meeting.

Over 10 protesters were injured. The SKM had said a murder case should be registered against IAS officer Ayush Sinha who was caught on tape allegedly telling policemen to "break heads" of protesting farmers.

Chaduni said a meeting with district administration officials was held here on Monday, but after failing to get any satisfactory response about their demands they decided to hold a mahapanchayat on Tuesday before proceeding to the mini-secretariat to gherao it.

He had earlier sought registration of a case against those involved in the lathicharge.

He also demanded a compensation of Rs 25 lakh and a government job for the family of a farmer who died after allegedly sustaining injuries in the lathicharge.

However, the administration here claimed that the farmer was not injured in the police action but had died due to a heart attack.