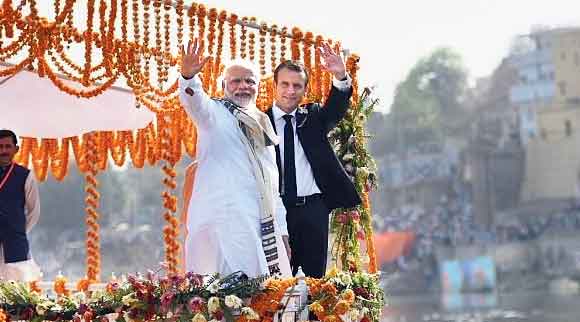 The Rafale deal involved the payment of 1 million euros to an Indian middleman by the fighter aircraft maker Dassault, a French media report said on Sunday.

The report contradicts assertions by both the Indian and French governments in the past that no middlemen were involved in the inter-government agreement.

It also breathes fresh life into a scandal that has survived a refusal by the Supreme Court of India to order a probe, vehement denials and an attempt by the Narendra Modi government to construe the mandate of the 2019 general election as a clean chit, and silence by large sections of the media.

The report by Mediapart, which describes itself as an independent French online investigative journal, noted that the deal had “threatened to tarnish” both governments.

“In India, it implicated someone very close to the ultra-nationalist Prime Minister Narendra Modi, who had announced the deal in April 2015. The affair potentially threatens two Presidents of France: François Hollande and his successor Emmanuel Macron. Also potentially in the firing line is Jean-Yves Le Drian, who as defence minister effectively became Hollande’s roving Rafale salesman before being named foreign minister under Macron,” according to the report.

Prime Minister Narendra Modi with then French President Francois Hollande in Paris in 2015 when the Rafale deal was finalised.
Telegraph picture

It said France’s anti-corruption agency, Agence Française Anticorruption (AFA), found that an expenditure of 508,925 euros was incurred by Dassault under the heading “gifts to clients” during an audit of the company’s accounts of 2017.

In the first of a three-part exposé released on Sunday night, Mediapart said: “French and Indian investigators, in fact, discovered a great deal of compromising information in the background to the deal; hidden commissions, dubious middlemen, suspicions of confidential documents being leaked and anti-corruption clauses being removed from contracts. But the affair was buried in both countries.”

Even in this instance, Mediapart suggests that the AFA, which is answerable to both the budget ministry and the justice ministry in France, did not refer the matter to prosecutors “against all apparent logic”.

The AFA’s inspectors found that Dassault had agreed to pay 1 million euros to a middleman just after the Rafale deal was signed in 2016.

“That middleman is now accused of money laundering in India in another defence deal. The company said the money was used to pay for the manufacture of 50 large replica models of Rafale jets, even though the inspectors were given no proof that these models were made,” Mediapart said.

Citing a confidential report by the AFA, Mediapart said the agency found the amount of 508,925 euros spent for gifts to clients “disproportionate in relation to all the other entries” under the same heading.

“The sum is indeed huge for a gift. Though French law does not set out precise limits, legal precedents suggest that giving a watch or an expensive meal costing several hundred euros can be enough to constitute corruption,” Mediapart commented.

As justification for this “larger than usual gift”, Dassault supplied the AFA with a “proforma invoice” dated March 30, 2017, provided by an Indian company, Defsys Solutions.

The AFA sought an explanation from Dassault, asking why it had ordered an Indian company to make models of its own aircraft, at 20,000 euros a plane; why this expenditure was entered in the accounts as a “gift to client”, and whether these models -- each was supposed to be the size of a small car -– were ever made.

“Mediapart understands that Dassault was unable to provide the AFA with a single document showing that these models existed and were delivered, and not even a photograph. The inspectors thus suspected that this was a bogus purchase designed to hide hidden financial transactions,” the news report said.

Defsys Solutions, which purportedly sold the Rafale models, is one of Dassault’s sub-contractors in India on the Rafale contract. The Defsys Solutions website does not specifically indicate that it creates aircraft models though design and manufacture of “weapon replicas” is part of its repertoire.

The one-million-euro invoice for the jet fighter models was sent to Dassault in March 2017 – six months after the September 2016 signing of the Rafale deal by the defence ministers of the two countries – by Sushen Gupta, who was arrested in March 2019 by the Enforcement Directorate on charges of money laundering in the AgustaWestland chopper case.

“Sushen Gupta’s arrest and the revelations in the Indian press did not escape the notice of the Agence Française Anticorruption. By 2020, when it came to finalise its report of its Dassault audit, the AFA had hard information incriminating Dassault: the proof that the aeronautical company had paid an Indian middleman – and one who had since been accused in a separate case -- via a one-million-euro deal for model aircraft that may not even exist,” the Mediapart report said.

“Yet the director of the AFA, Charles Duchaine, decided not to refer the matter to the prosecution authorities. Instead, the aircraft models issue was relegated to two short paragraphs in the AFA’s final report on its Dassault audit.”

In India, the Rafale deal has been mired in controversy ever since Prime Minister Modi announced it during his April 2015 visit to France, primarily because then foreign secretary S. Jaishankar had in a pre-departure briefing told the media that the Premier would not be discussing it during his meetings.

Asked if any progress could be expected on the negotiations for the Rafale deal, Jaishankar – who is now the foreign minister – said: “My understanding is that there are discussions under way between the French company, our ministry of defence, HAL (Hindustan Aeronautics Limited) which is involved in this. These are ongoing discussions. These are very technical, detailed discussions. We do not mix up leadership-level visits with deep details of ongoing defence contracts. That is on a different track. A leadership visit usually looks at big-picture issues even in the security field.”

Three days later, in a surprise move, the Prime Minister announced at a joint media meeting with then French President Francois Hollande that India had ordered 36 ready-to-fly Rafale jets, thereby junking the earlier deal for which negotiations had begun during the UPA years.

The terms of the Rs 59,000-crore deal, formally signed in September 2016, had an offset clause, according to which the supplier had to spend half the money in India. Dassault Aviation decided to end its negotiations with HAL and created a joint venture with Anil Ambani’s Reliance Infrastructure to meet its offset obligations, leading to allegations of the Modi government giving preferential treatment to the Ambanis.