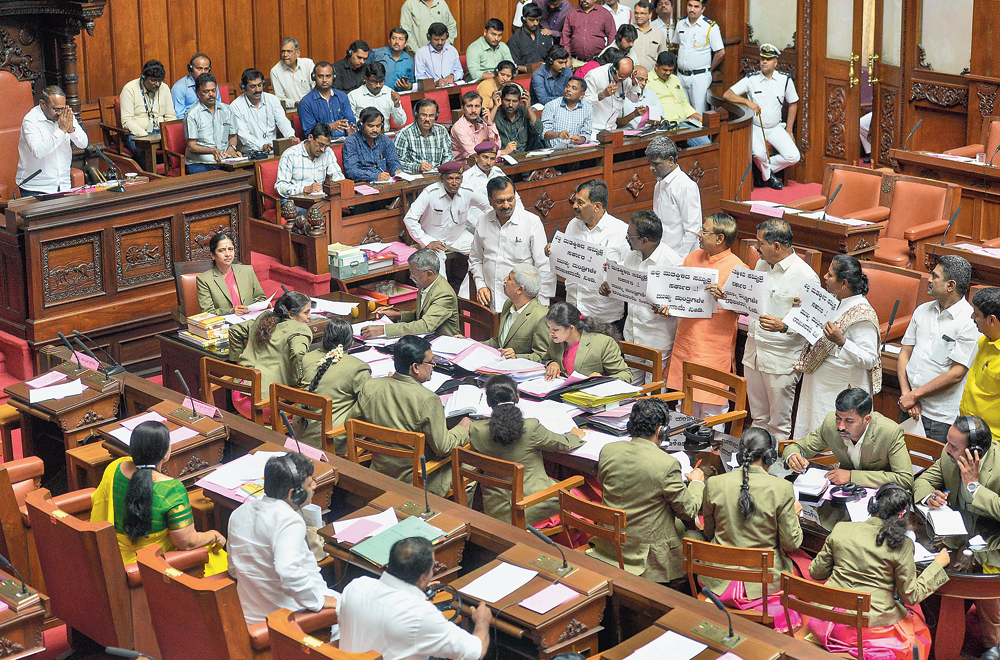 The Supreme Court is scheduled to pronounce on Wednesday its verdict on a petition filed by 15 dissident MLAs of the Congress and the JDS seeking a direction to the Karnataka Speaker to accept their resignations, a judgment that will have a bearing on the trust vote sought by chief minister H.D. Kumaraswamy the day after.

Eighteen lawmakers from the ruling alliance, including two Independents, have resigned. Once the Speaker accepts their resignations, the government’s strength will fall from 119 to 101. In the House of 224, the BJP has 105 members, enough to form the next government as the halfway mark would then come down to 104. The Independents too are likely to support the BJP.

If the apex court, which is set to take up the matter at 10.30am on Wednesday, rules that the Speaker must decide on the resignations before Thursday’s floor test, then it will become difficult for the ruling combine to prove its majority as it would lose its majority if the MLAs’ offers to quit the House are accepted. In such a case, chief minister Kumaraswamy will have to step down.

If the Speaker rejects the MLAs’ resignations and goes ahead with the floor test, the dissidents are likely to challenge the decision in the Supreme Court.

In the event of the top court accepting the Speaker’s contention that he is constitutionally bound to first decide on the disqualification proceedings pending against some of the legislators since January, it may shore up the strength of the Congress-JDS combine.

Yet another scenario could be the court allowing the chief minister to take the floor test, but with a fiat to the Speaker to decide on the resignations of the MLAs within a certain time frame. But in such a case the court will have to decide on the plea of the dissident MLAs that they should not be compelled to vote against their conscience as a whip has been issued by the ruling combine for the floor test.

It is possible that in such a scenario the court could rule that any disqualification proceedings initiated for defying the whip would be subject to the final outcome of the matter pending before it.

The court asked Singhvi what prevented the Speaker from either rejecting or accepting the resignations. The court said that neither the Speaker nor the Congress-JDS combine could question its jurisdiction to entertain the petition filed by the legislators. The court pointed out that last year the two parties had compelled it to conduct an unprecedented pre-dawn hearing when the Karnataka governor had given 15 days to BJP leader B.S. Yeddyurappa to prove his majority in the House. Anticipating defeat, Yeddyurappa had stepped down as chief minister.

“Exercise of jurisdiction of this court depends on the extent of self-restraint we have. There is no flexible rule to exercise our jurisdiction. It depends upon the fact situation,” CJI Gogoi said.

“This court had ordered a floor test within 24 hours, appointed a pro tem Speaker. At that time you did not have a problem with our jurisdiction. Just because it was in your favour you were okay with it,” Justice Gogoi said when Singhvi submitted that the Speaker had certain constitutional powers with which courts should not interfere.

“A letter is given to the Speaker on 6th of July, he does not do anything until they (legislators) come to this court on July 10…. What does he mean (by) ‘I need time’?... What stopped the Speaker from accepting or rejecting the resignations?” the CJI asked Singhvi.

Singhvi submitted that till date four of the 15 dissidents had not even appeared before the Speaker. He argued that under the rules, the resignations have to be submitted in person by the legislators and the documents have to be verified for genuineness.

Singhvi said that Speaker Kumar, being an experienced legislator, needed time to examine whether the resignations were genuine and had not been the result of pressure or coercion.

Rohatgi contested Dhavan’s contention that the court should not entertain the petition since the fundamental rights of the legislators had not been violated.

Arguing that the Speaker was bound to accept the resignations “immediately”, Rohatgi said the dissident MLAs’ fundamental right to resign had been violated.

“I (the MLAs) want to resign. Nobody can compel me to work. I don’t want to defect. I want to go to the people again and get elected. By the threat of disqualification, the Speaker is compelling me to sit with a particular group and vote in a particular manner. He is compelling me to go against my wishes. It is impinging upon my fundamental rights,” Rohatgi argued.

Dhavan, appearing for the chief minister, said the status quo order passed by the court last week had exceeded its jurisdiction.

The senior advocate submitted that the rebel legislators did not make any effort to meet the Speaker, rather they moved in “packs” to Mumbai and stayed put at a five-star hotel.