The Supreme Court on Tuesday observed that "extra-judicial" acts like "cow vigilantism or any other vigilantism" and lynchings should be nipped in the bud and passed guidelines to the Centre and the states such as fast-tracked trials, victim compensation, deterrent punishment and disciplinary action against lax law-enforcing officials. 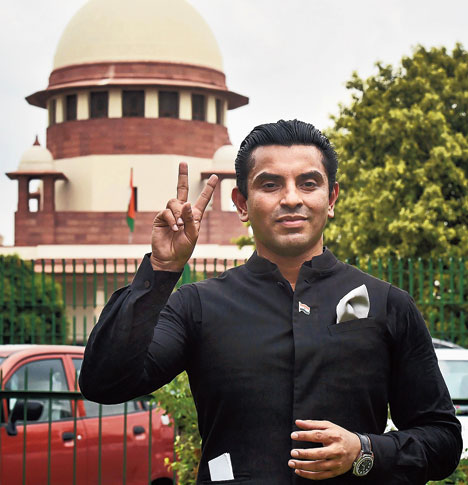 New Delhi: The Supreme Court on Tuesday observed that "extra-judicial" acts like "cow vigilantism or any other vigilantism" and lynchings should be nipped in the bud and passed guidelines to the Centre and the states such as fast-tracked trials, victim compensation, deterrent punishment and disciplinary action against lax law-enforcing officials.

A three-judge bench of Chief Justice Dipak Misra and Justices A.M. Khanwilkar and D.Y. Chandrachud also urged Parliament to frame a special legislation to tackle the problems posed by vigilante squads and said that until then the guidelines would stand the force of law.

The court passed the order while dealing with a batch of petitions filed by Congress activist Tehseen Poonawala and others seeking directions to combat the menace of self-appointed vigilante squads lynching people in the name of cow protection.

The court also apparently took note of the rising incidents of lynching on the suspicion of child kidnapping in different parts of India, the latest being the killing of a Google engineer in Karnataka.

• The states shall designate a senior police officer not below the rank of police superintendent as nodal officer in each district. These officers will set up a task force to be assisted by one DSP-rank officer for taking measures to prevent mob violence and lynching. The task force will gather intelligence reports on people likely to commit such crimes or who are involved in spreading hate speeches, provocative statements and fake news

• The state governments shall immediately identify districts, sub-divisions and villages where instances of lynching and mob violence have been reported in the recent past. The process of identification should be done within a period of three weeks from the date of the judgment

• The nodal officer shall hold regular meetings (at least once a month) with the local intelligence units in the districts and station house officers to identify tendencies of vigilantism and mob violence.

• The central and state governments should broadcast on radio, television and other media platforms, including the official websites of the home department and the state police, that lynching and mob violence will invite serious consequence

• It will be the duty of the Centre and the states to curb the dissemination of irresponsible and explosive messages, videos and other material on social media platforms

• The Centre shall issue appropriate directions to the states on the gravity of the situation and the measures to be taken.

• Despite the preventive measures taken by the state police, if it comes to the notice of the local police that an incident of lynching or mob violence has taken place, the jurisdictional police station shall immediately lodge an FIR

• It shall be the duty of the station house officer to immediately intimate the nodal officer in the district who shall, in turn, ensure that there is no further harassment of the family members of the victim(s)

• The investigation in such offences shall be personally monitored by the nodal officer, who shall be duty-bound to ensure that the investigation is carried out effectively and the chargesheet filed within the statutory period

• The states shall prepare a scheme to compensate lynching and mob violence victims. While calculating the compensation, the state governments shall give due regard to the nature of bodily injury, psychological injury, loss of earnings and expenses incurred on account of legal and medical expenses

• The cases of lynching and mob violence shall be specifically tried by designated courts in each district. Such courts shall try cases on a day-to-day basis. The trial should preferably be concluded within six months.

"We may hasten to add that this direction shall apply to even pending cases," CJI Misra, writing the judgment, said.

• The courts may, on application by a witness or by the public prosecutor, take such measures as it deems fit, for protection and for concealing the identity and address of the witness

• Departmental action must be taken against police or district officials who fail to act against the perpetrators. Such failure will be considered as an act of deliberate negligence and/or misconduct for which appropriate action must be taken. The action shall be taken to its logical conclusion preferably within six months.