The Supreme Court Bar Association president, who resigned from the post on Wednesday, described the top court’s decision to hold a hearing on Tuesday as 'astonishing' 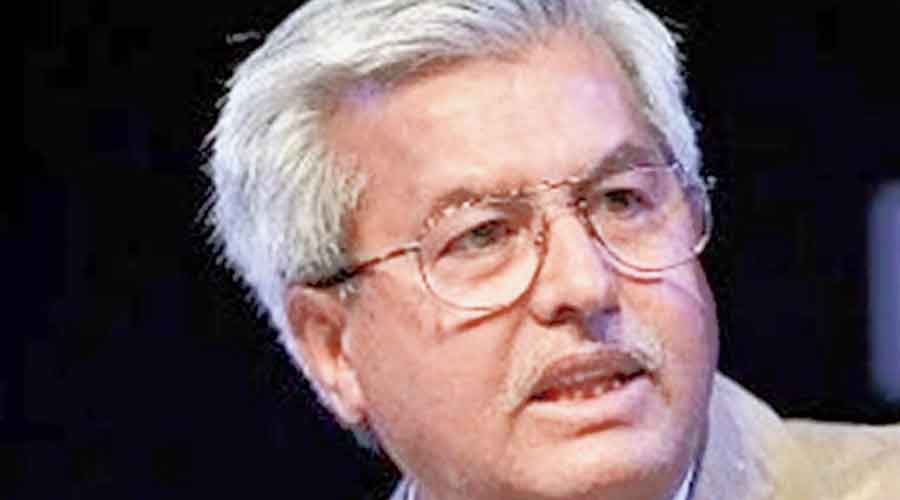 Supreme Court Bar Association (SCBA) president Dushyant Dave resigned from his post with immediate effect on Thursday saying he has forfeited his right to continue. Acting SCBA Secretary Rohit Panday confirmed the development that the senior advocate has resigned with immediate effect. Dave in his brief letter stated that the tenure of the Executive Committee of SCBA has already ended and it may not be possible to hold virtual elections as per schedule due to reservations held by some lawyers. "Following recent events, I feel that I have forfeited my right to continue as your Leader and so I hereby tender my resignation from the post of the President of the SCBA with immediate effect. Our term has already come to an end. (PTI)
File picture
R. Balaji   |   New Delhi   |   Published 14.01.21, 01:58 AM

The Supreme Court is making forays into uncharted territory by staying the implementation of the new farm laws while refusing to freeze the Citizenship Amendment Act and the recent “love jihad” ordinances issued by the governments in Uttar Pradesh and Uttarakhand, eminent jurist Dushyant Dave told The Telegraph on Wednesday.

“The Supreme Court’s decisions to stay the implementation of the farm laws and constitute a four-member panel raise very serious question marks about the purpose and object underlying the decisions,” Dave said in an interview in which he spoke of his greatest respect for the court.

Dave, president of the Supreme Court Bar Association (SCBA), described as “astonishing” the top court’s decision to hold a hearing on Tuesday although the listed business mentioned only the issuance of orders, which ensured that he and some other key lawyers could not take part in the proceedings. Dave is one of the lawyers representing various farmers’ groups in the court.

Referring to Tuesday’s court decisions, Dave said: “If Parliament had passed the laws, what is a committee going to do when direct negotiations between the farmers and the government have yielded no results after eight rounds? The court was clearly making forays into uncharted territory and into a very serious political issue confronting the nation.

“The court has powers to grant a stay, no doubt, even of legislation but it can do so only if the laws are ex facie (on their face) unconstitutional. The order passed does not record such a reason. The court, perhaps as observed during the hearing, is moved by the plight of the farmers. Well and good,” Dave said.

“But the same court in December 2019/ January 2020 flatly declined to grant a stay on the implementation of the Citizenship Amendment Act, as a result of which tens of innocent lives were lost. Thousands of properties were destroyed. Even a few weeks ago, the bench (led by Chief Justice S.A. Bobde, who also heads the farm law bench) declined to stay the operation of the ordinance issued in Uttar Pradesh and other states on the issue of ‘love jihad’, as a result of which tens of innocent people have gone to jail under prima facie draconian and unconstitutional laws.”

The so-called love jihad laws seek to criminalise inter-religious marriages if conducted ostensibly for the purpose of religious conversion.

Dave recalled a newspaper article he had written in the last week of December 2019 requesting Justice Bobde to constitute an urgent bench during the vacation and stay the Citizenship Amendment Act. “Sadly, the court never took notice of it,” Dave said.

He said that under the Constitution, the Supreme Court has a paramount duty to maintain strong checks against executive excesses and legislative digressions.

“Recently the court wished away a substantial challenge to the highly controversial Central Vista project on the specious ground that in policy matters, the Supreme Court will not intervene. Are the farm laws or their repeal not a policy matter?” he asked.

According to Dave, the apex court’s Tuesday order also raises concerns from the perspective of the independence of the committee. The bench suggested the names of the committee members: the parties were not consulted, unlike normal procedure.

“How the court came across the four names is in itself a serious question. The four members are respected and experts in their respective fields but they not only supported the farm laws (in the recent past) but some of them had criticised the farmers’ agitation. Should the court constitute a committee that is so biased? Therefore, the entire exercise can serve no purpose other than give a report to the court supporting the laws as per the proclaimed views of the members,” he said.

Dave contended that the court should have selected fiercely independent members if it was serious about resolving the issue.

Dave referred to a possible long-term impact. “The Supreme Court orders really seek to put the controversy in cold storage as the petitions challenging the validity and raising substantial questions will not be heard now for a long time,” he said.

The senior lawyer felt that the new farm laws were unconstitutional prima facie, considering that agriculture is a state subject in list II of the Seventh Schedule of the Constitution. Parliament cannot legislate on it.

“Powers under the concurrent list to legislate in respect of food cannot include the subject matter as included in the two farm laws. In pith and substance, the farm laws deal squarely and directly with agriculture, making them seriously open to challenge,” he said.

Dave said some of the petitioners before the apex court, seeking eviction of the protesting farmers, were not bona fide and were part of an attempt to stop the agitation. The Supreme Court should have gone into the bona fides of the petitioners, more so when the CJI had been repeatedly saying that the right to protest was inherent in citizens and that he did not want to stifle that.

Further, he argued, none of the petitioners or even the government, much less the farmers, had sought a stay on the legislation or the formation of a committee. Yet the Supreme Court chose to pass orders staying the laws and setting up the committee.

Dave said that on Monday, when the hearing began, the bench had come with a clear mind to grant a stay and constitute the committee, as was evident from the observations made by the CJI.

“This was a highly sensitive and political issue and, therefore, for the court to have adopted this course was unusual and surprising,” Dave said. He underlined that his requests for an adjournment to elicit the views of the farmers had been ignored.

He said that at one stage even senior advocate Harish Salve, appearing for a petitioner who wanted the protesting farmers evicted, felt that Dave’s request for adjournment should be accepted, considering the number of unions involved. This was also the request of attorney-general K.K. Venugopal and solicitor-general Tushar Mehta. Yet, Dave said, the bench chose to proceed with its orders.

Dave expressed surprise that the Supreme Court had conducted a hearing on Tuesday despite Monday evening’s order clearly stating that “List the matters tomorrow ie, 12-01-2021, for orders”.

For orders or judgments, senior counsel rarely appear. Even an advocate-on-record may or may not be present.

“Therefore, I and my colleagues did not remain present. We did not get any intimation from the registry before the start of the hearing on Tuesday or even during the hearing that matters will be or were being heard and that we should appear through video link,” Dave said.

“It is, therefore, astonishing that the Supreme Court heard the matters on merit despite the above position and, sadly, even commented on our absence and, in fact, went on to note the same in the order passed thereafter.

“With greatest respect to the court, the procedure followed was not normally accepted procedure and the court should have been more careful to find out why we had not joined the hearing.

“I must say that had we known that the matters were to be heard, I and my colleagues would have happily joined the proceedings and assisted the court. I must say it was very surprising that in these circumstances the learned solicitor-general, Mr Salve and others joined the proceedings and made submissions on merits when clearly matters were fixed for pronouncement of orders.”

Dave added: “The entire procedure followed by the court was unusual and contrary to rules, practices and conventions. It would have been appropriate even if counsel who appeared had pointed out that perhaps we did not appear because of the nature of the listing and could have requested that the matter be kept on Wednesday to enable us to appear.

“In fact, the honourable court itself should have done so if it was keen at all to hear our views on the suggestions proposed — there was no tearing hurry to pass the orders on Tuesday itself. Sadly, the court did not do so, which is deeply disappointing.”