Sadhus to RSS chief Bhagwat: Tell us the date

Furious sadhus chanted slogans against the Prime Minister, VHP and the RSS at the Ardh Kumbh on Friday 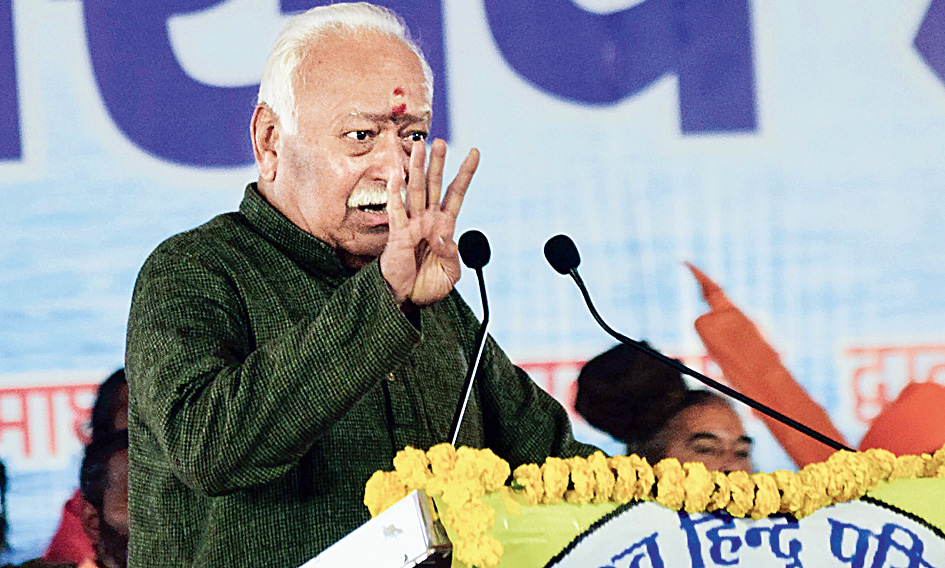 Furious sadhus chanted slogans against the Prime Minister, VHP and the RSS at the Ardh Kumbh on Friday after a Dharma Sansad prescribed prayers to God and a vote for Narendra Modi as the way to hasten a Ram temple in Ayodhya.

“Tarikh batao, tarikh batao (Announce the date, announce the date),” they shouted, interrupting a speech by RSS chief Mohan Bhagwat and setting off a scrum with Sangh-VHP cadres, who shoved several protesting sadhus out of the venue.

The VHP has already organised three Dharma Sansads — meetings of sadhus — to build a campaign for the Ram temple, and the two-day event in Allahabad was the fourth of the series. It came at a time many sadhus gathered there had announced a post-Kumbh agitation against what they saw as the Sangh parivar’s empty promises on the Ram temple.

Akhileshwaranand, a VHP-linked sadhu, read out the Sansad’s resolution from the dais, which announced two programmes:

On the occasion of Magh Krishna Trayodashi, February 2, thousands of Ram bhakts will assemble along the Ganga’s banks in the Lower Sangam area to participate in a Mahayagna between 10am and 11am for the construction of a Ram temple in Ayodhya.

Presumably, the figure of 13 crore is an aggregate. If each bhakt has to chant the mantra 13 crore times, and each recitation takes 3 seconds, the entire process would take not one day but more than 12 years.

“We are not announcing a date (for the construction of the Ram temple) because we don’t want to politicise our Dharma Sansad,” Akhileshwaranand said.

Enraged, the assembled sadhus began shouting that the meeting must announce a date. Slogans were chanted against Bhagwat, who was on the dais.

Trying to cool tempers, Bhagwat appealed: “The temple will be built; please wait six months. Bring the Modi government back at the Centre because nobody else is committed to the Ram temple.”

This set off a chorus of “Tarikh batao….”

Eyewitnesses said that a brief scuffle broke out between some of the sadhus and RSS-VHP workers. The parivar cadres threatened television crews, forcing them to stop filming the melee.

Swami Shradhanand, a sadhu from Odisha, told reporters he had become disillusioned with the VHP and the RSS.

“They are doing nothing except help the BJP win elections. The Ram temple is a political issue for them,” he said.

Swaroopanand Saraswati, the Shankaracharya of Jyotir Math and a harsh critic of the BJP, had held a Param Dharma Sansad in the Sangam area from January 28 to 30 and declared a sadhus’ march to Ayodhya from February 10. He said he would lay the foundation stone for a Ram temple in Ayodhya on February 20.