A large number of students had turned up outside the embassy in Kiev in the morning, seeking shelter 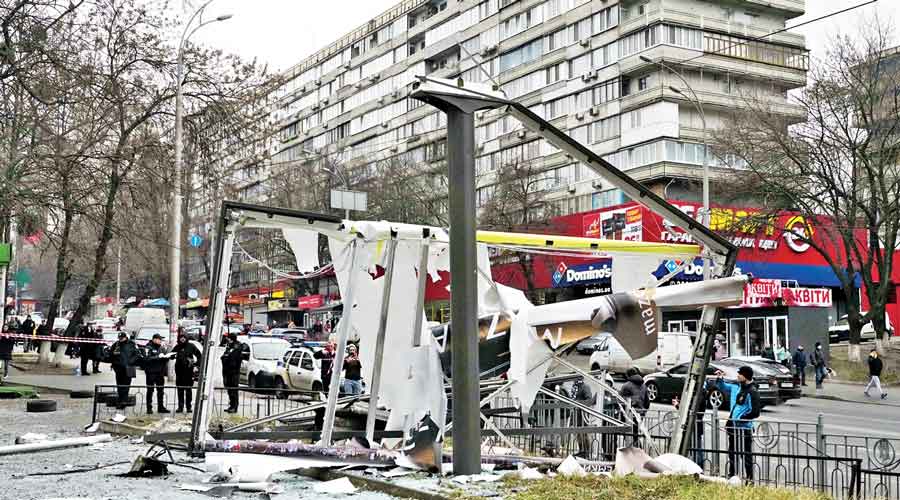 The Centre on Thursday evening put in place plans to bring out Indians stranded in Ukraine through bordering Hungary, Poland, the Slovak Republic and Romania as the Ukrainian airspace was shut down early in the day following Russian bombing of several cities, including the capital Kiev.

The urgency in government action followed criticism from students stranded in Ukraine and the Opposition back home over alleged delay in responding to the crisis. A large number of Indian students had turned up outside the embassy in Kiev in the morning, seeking shelter. Social media was flooded with videos of students complaining of lack of assistance.

The plan to evacuate through Hungary was the first to be announced by the embassy in Budapest after the mission in Ukraine tweeted three advisories in quick succession, including a video message by ambassador Partha Satpathy where he indicated that contingency plans were being worked out to get Indians out through the neighbouring countries along Ukraine’s western borders.

Israel had earlier in the day itself begun asking its nationals to exit Ukraine through Poland as countries along the western border of the nation under attack from Russia are gearing up to receive not only foreigners trying to leave but also Ukrainians fleeing the military operation.

Indians wait outside the embassy in Kiev to be rescued on Thursday.
PTI photo

According to the Indian embassy in Hungary, a team from the mission has been sent to the border post at Zohanyi to coordinate and provide assistance to facilitate the exit of the Indians from Ukraine.

“Mission is working with Govt of Hungary to provide all possible assistance. GoI is closely monitoring the situation and evacuation plans are being worked out,” the Hungarian mission tweeted, indicating that India was now shifting from repatriation mode to evacuating the estimated 20,000 Indians in Ukraine.

Later in the night, the external affairs ministry announced that teams were being sent to Ukraine’s land borders with Hungary, Poland, the Slovak Republic and Romania to assist in the evacuation of Indian nationals. Safe routes have been identified for the travel to the borders and officials who can speak Russian are being posted to facilitate the evacuation.

The phone numbers of officials in each of these facilitation centres at the four borders have been provided to allow those stranded to coordinate directly with those in charge of the closest exit point from their respective locations.

External affairs minister S. Jaishankar has spoken to his counterparts in the four countries through which the evacuation will be conducted. If required, the Indian Air Fore will be pressed into service to airlift the students.

After the first advisory was issued on February 15 to Indians in Ukraine to consider leaving the country temporarily, the Narendra Modi government had facilitated more flights to the country for bringing back Indians — mostly medical students — but most were reluctant to leave without assurance of online classes. One such Air India flight that was headed for Kiev on Thursday return mid-route from Iran following the bombing of the airport in the Ukraine capital.

Given the airspace closure, disruption in rail services and traffic snarls on the routes leading to the western borders of Ukraine, Satpathy’s advise to Indians was to “stay wherever you are, in your familiar locations”.

Since several were in transit, heading to airports to leave the country, he urged them to return to their “familiar places of habitation”. The Indian diaspora in Kiev was also roped in to help nationals stranded in the capital as videos emerged of students stuck at the railway station with flights cancelled and some others converging outside the mission itself.

Late in the evening, the Indian embassy in Ukraine posted a video of the ambassador interacting with the students and explaining to them the reason for making them wait outside the mission after they converged there following the cancellation of the Air India flight.

According to Satpathy, it was a “conscious decision” to keep them waiting outside while martial law was in place to impress upon the Ukrainian authorities the need to free up space to accommodate them in a nearby school.

Like much of the world, India was taken by surprise by the blistering pace of the attack launched by Russia from multiple points, including the Black Sea, and the targeting of the capital in particular.