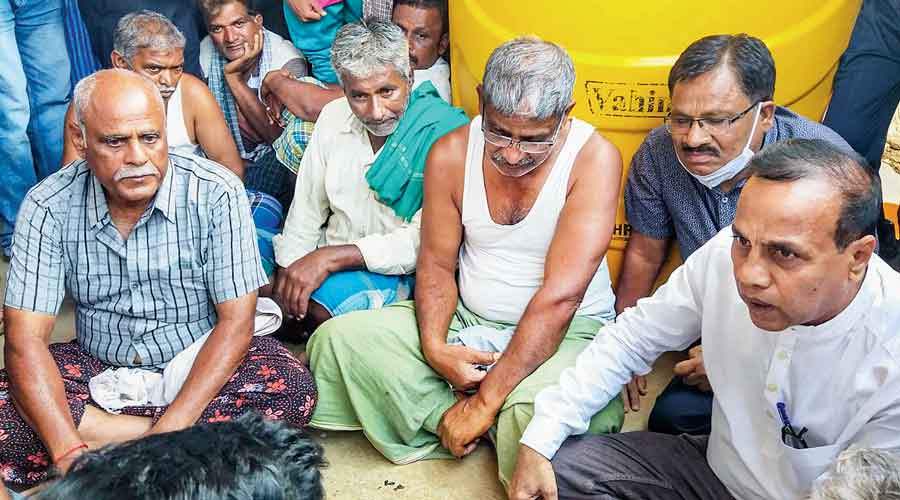 Relatives and friends gather at the residence of Naveen Shekharappa Gyanagoudar at Chalageri village in Haveri, Karnataka, on Tuesday.
PTI Photo
PTI   |   Haveri (Karnataka)   |   Published 02.03.22, 03:50 AM

Costly medical education and “casteism” are some of the factors that prompt Indian students to flock to foreign destinations like Ukraine to achieve their doctor dreams, the father of Indian student Naveen, killed in the war-torn European nation, said on Tuesday.

Gyanagouda said Modi had assured him that arrangements would be made to get his son’s body in the next two to three days as the fight was still on in Kharkiv.

According to Gyanagouda, his son was very intelligent since his childhood, and never went for tuition.

In Class X, he had scored 96 per cent while in Class XII, he got 97 per cent, Naveen’s father told reporters.

He added that his son had dreamt of becoming a doctor when he was in Class X as he was very strong in science.

“Due to the education system and casteism, he could not get a seat despite being an intelligent student. Here we have to pay a bribe of Rs 1 crore to Rs 2 crore to get an MBBS seat,” he alleged, apparently referring to concepts like capitation fee or donation.

“I am dejected with our political system, education system and casteism. Everything is in the control of private institutes. When education is possible for just a few lakhs of rupees, why crores are spent here? The education there (Ukraine) is very good. Even the equipment are very good compared to India. Colleges and teaching are good,” he said.

He said he borrowed money from his friends and relatives and sent Naveen to Ukraine to study MBBS.

He appealed to Modi to see to it that quality higher education is provided at minimum expenses in private institutes as well.

“At least, from now on, some efforts in this direction should be made,” the heart-broken father said.

He added that for the past one week, parents had been meeting MPs, MLAs and ministers to arrange for the safe return of students. They tried to bring back those in the safe zone on the border but not those who are in the risk zone, he said.