Family members of Naveen Shekarappa and Karnataka Chief Minister Basavaraj Bommai were present at the airport, along with state government officials 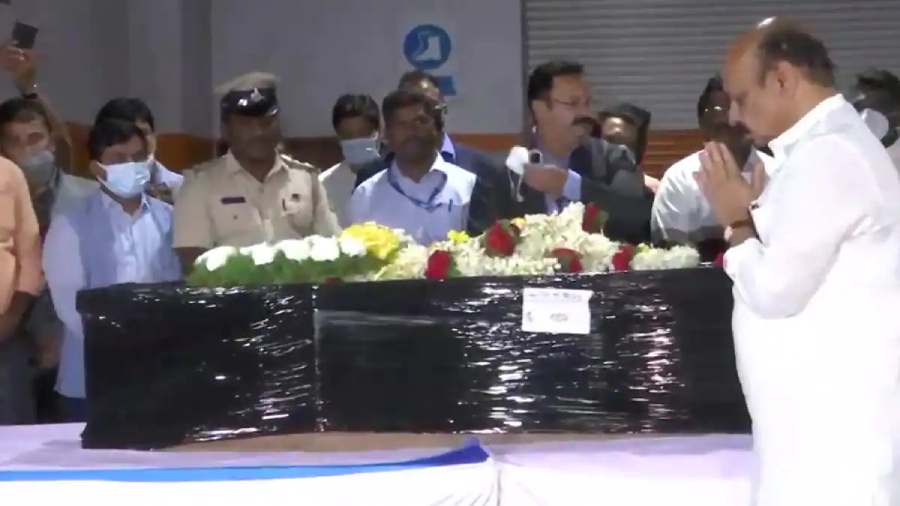 The mortal remains of a medical student from the state, who was killed in Russian shelling in war-torn Ukraine, arrived at the airport here on Monday.

Gyanagaudar's family members, Chief Minister Basavaraj Bommai were among the others present at the airport to receive the body.

The body was then taken to Gyanagaudar's native place, Chalageri village of Ranebennur taluk in Haveri district.

Stating that it is unfortunate that Gyanagaudar lost his life in the conflict zone, Bommai speaking to reporters said, "His mother was crying for the body to come.

Initially, we were also sceptical about the possibility of bringing the body from the war zone. It was a herculean task, which was successfully conducted by Prime Minister Narendra Modi with his huge diplomatic strength and image."

Thanking the Prime Minister, External Affairs Minister S Jaishankar and officials, for bringing thousands of students back home from Ukraine, he said, "this (bringing body) was just impossible because most of the time we can't get the bodies of our soldiers from war zones, but here getting a citizen's body that too from a third country, is just a miracle."

"I thank the Central Government for making efforts on bringing back the body of Naveen Shekharappa Gyangoudar, who was killed in a shelling attack in Ukraine. It's unfortunate that we lost him in the shelling," Mr Bommai said while addressing the press outside the airport.

The Karnataka Chief Minister has handed over a cheque of ₹ 25 lakh to the family of Naveen Shekharappa and promised a job for a family member.

Earlier on Saturday, Shankarappa, father of Naveen said that the family members have decided to donate their son's body for medical research.

"My son wanted to achieve something in the medical field, that didn't happen. At least his body can be used by other medical students for studies. That's why, we at home, have decided to donate his body for medical research," Naveen's father said.