RSS man seen without sacred kit on his head at Sabarimala

Champions of tradition need not always practice what they preach 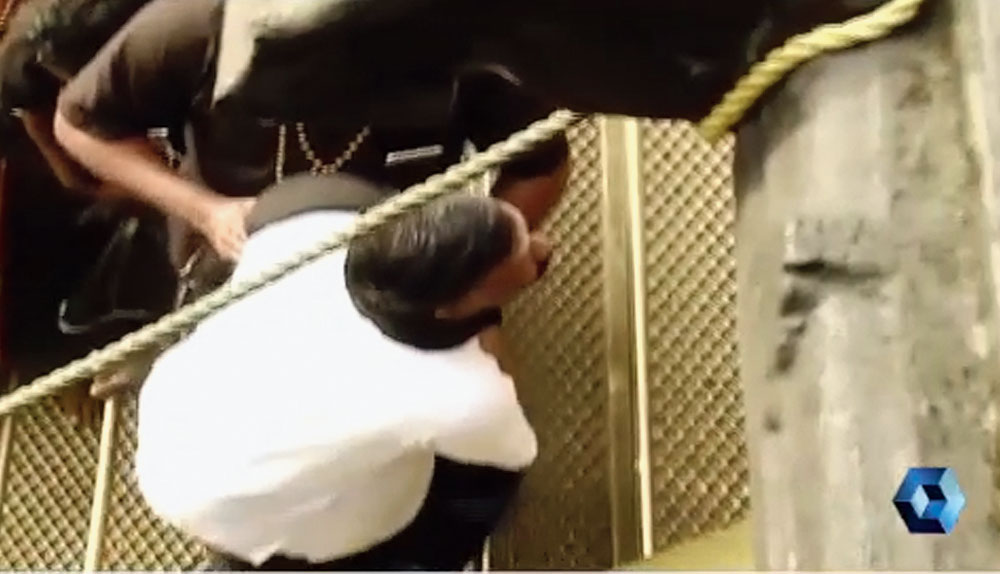 Blind protests at the sight of a woman in Sabarimala on Tuesday threw up an eye-opener: the champions of tradition need not always practise what they preach.

RSS leader Valsan Thillenkeri was filmed standing on the hallowed “18 steps” or pathinettampadi without a mandatory kit, known as irumudikkettu, of puja essentials devotees carry on their head during the entire journey to the temple in Kerala.

The shrine is now at the centre of a tussle between law-keepers and traditionalists who are opposing a Supreme Court verdict that scrapped a ban on women aged between 10 and 50 from entering the premises.

The temple had opened for less than 30 hours on Monday evening, drawing many more devotees than usual and triggering a fresh stand-off. The temple closed on Tuesday at 10pm without any woman of childbearing age entering the premises and will reopen again for the peak season on November 16.

In the morning, tempers had flared when a woman arrived for the choroonu (rice-eating ceremony) of a child. Several “devotees” ran towards the woman, suspecting that she was younger than 50.

The petrified family was faced with more than 200 charged-up men menacingly shouting “Swamiye Ayyappa”, the signature chant for the Lord symbolising purity of thought, word and deed, not thuggery.

But her Aadhaar card, a document that has an ardent devotee in none less than the Prime Minister, splashed egg on the face of the bhakts. The woman’s age turned out to be 52, two years above the cut-off sought to be illegally imposed by the crowd.

The police escorted the family to safety and later to the temple through a gate reserved for the staff.

Around this time, Thillenkeri, who was on his way to the temple after climbing the 18 steps, returned to the steps, apparently to calm the “devotees”.

As a devotee, Thillenkeri checked almost all the boxes: white shirt, black scarf and the traditional black dhoti. But TV cameras focused on something amiss: the Sangh leader’s head was devoid of the mandatory kit.

Making matters worse for the RSS leader, Sabarimala tantri (the custodian of the rituals) Kandararu Rajeevaru told a Malayalam channel: “The tantri and members of Pandalam palace don’t need it. But everyone else must have the irumudikkettu (the kit) while climbing the steps. There is no doubt that it’s a violation.”

With the “puritanical” Sangh getting paid back in its own coin, Thillenkeri came up with an explanation that landed him in hotter waters.

“I had the irumudikkettu in my hands and then gave it to another person standing nearby…. I heard the commotion and went down a few steps to ask the people to calm down,” he explained.

This made some ask why a “traditionalist” like Thillenkeri would want to hold the holy kit in his hands, especially standing on the 18 steps, and then give it to another person when a devotee was supposed to carry it on his head.

Thillenkeri denied breaking any tradition but added: “If anyone feels that I have broken any tradition, I am prepared to beg forgiveness from Lord Ayyappa.”

It was not merely Thillenkeri’s head that was “exposed”. The cameras also showed the protesting “devotees” listening to him with rapt attention and many filming him with their mobile phones, which brought under strain the Sangh parivar claim that the devotees did not belong to its ranks.

The RSS leader was also seen wielding a police megaphone, which he said was thrust into his hand by someone. Some suspect that seeing his hold over the “devotees”, an official could have handed him the megaphone to calm the agitated crowd.

But at least one official who lunged to find fault with Thillenkeri also found himself at the business end of the camera.

K.P. Sankaradas, a member of the Devaswom board that governs the temple, announced a probe against the Thillenkeri incident. But within hours Sankaradas, too, was caught in a similar controversy with TV channels showing him following the temple’s priests without the kit.

A group of devotees had on Monday night started a protest against a homemaker, Anju, whose husband wanted her to visit the shrine. The police had advised caution at night and called over her relatives.

On Tuesday, it emerged that the husband has been mentally disturbed ever since he was charged in a murder case a few years ago. The family eventually returned home.

A few television cameramen also came under attack during the morning protests on the otherwise serene temple premises.

The temple will open again at 5pm on November 16 and stay open until mid-January with a short break in between. This is when lakhs of devotees flow to the shrine from all southern states and elsewhere.

The Supreme Court is slated to take up a petition seeking a review of its verdict on November 13.