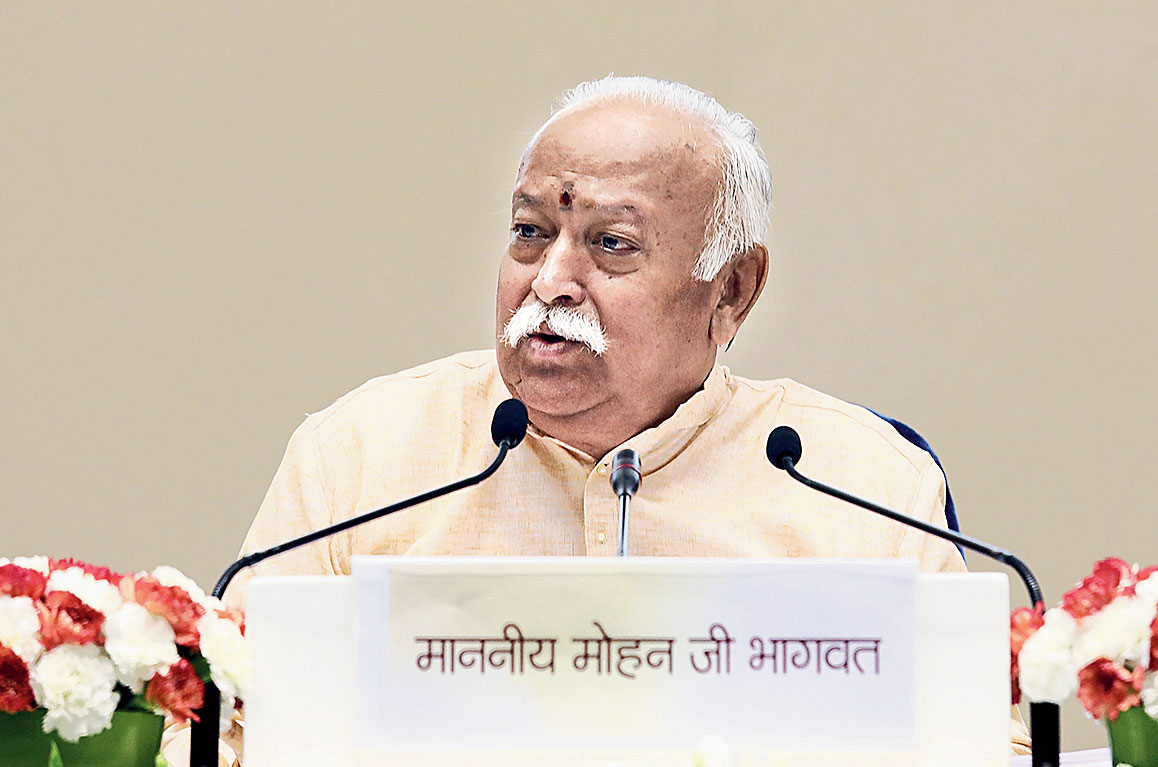 RSS chief Mohan Bhagwat on Wednesday pushed for the construction of a “grand Ram temple” in Ayodhya “soon” and “in whichever way possible”, adopting a more aggressive posture on the final day of his three-day lecture series.

He also recommended the abolition of Article 370, which gives autonomous status to Jammu and Kashmir, and Article 35A, which bestows special privileges on the state’s residents. A batch of petitions before the Supreme Court seeking repeal of Article 35A has triggered unrest in the Valley, which fears an RSS hand behind the move.

A Ram temple and the repeal of Article 370 were once described as part of the BJP’s “core Hindutva agenda”, which it has downplayed over the past two decades to gain allies and wider acceptability. Many in the Sangh parivar believe that raising such issues now can help consolidate the Hindu vote in the upcoming state and Lok Sabha polls.

On the first two days of his lectures on the aims and activities of the RSS, Bhagwat had attempted to portray it as a largely benign organisation that believed in democracy and the Constitution, accepted “those who oppose us” and did not look to dominate or dictate.

But when a questioner on Wednesday asked about the possible construction of a Ram temple on the disputed Ayodhya site, Bhagwat did not mention that the matter was before the Supreme Court.

He said building a Ram temple would be in the “national interest”, for it involves the “faith of crores of people” and would substantially reduce hostility towards Muslims.

“If it (a Ram temple) happens, then a major reason for discord among Hindus and Muslims will end. And if it happens with goodwill (on the part of Muslims), then finger-pointing towards Muslims will reduce substantially,” Bhagwat said.

Bhagwat was asked whether the courts should interfere in matters of faith and whether the government should promulgate an ordinance to pave the way for the temple to be built at the earliest.

He ducked the ordinance query, saying this was for the government to decide, but added: “As an RSS volunteer and one who was part of the Ram temple movement, I want a grand Ram temple built soon.”

Bhagwat claimed that it had been proved with the help of laser rays that a temple existed at the site (of the now-demolished Babri Masjid), so nothing but a temple should be constructed at the spot.

“Ram is not only a god, he is the epitome of righteousness,” he said, claiming every section of society respected the epic hero.

While answering a host of other questions from the audience, however, Bhagwat tried to present a moderate face.

Asked about cow vigilantism, he said he disapproved of violence and the breaking of the law in the name of cow protection. However, he added, there were instances also of violence by cow smugglers and this merited discussion too.

He stressed that protecting cows was important for the country and the government should ensure this.

Bhagwat appealed to Muslims to shed their fear of the RSS and join it. He said the RSS was not against Muslims and that the Hindu Rashtra it sought did not exclude India’s Muslims.

But when asked about purported changes to the “demographic balance” in parts of India and the “declining” Hindu population, Bhagwat said the demographic balance was considered significant the world over and should be maintained in India too.

“Keeping this in mind, a policy on population should be prepared,” he said, adding the policy should keep in view the country’s projected population in the next 50 years and its resources to deal with the number.

Bhagwat said such a policy should be applied first where the problem (of population) exists, “where there are more babies but means to bring them up are limited.… If their upbringing is not good, then they will not become good citizens”.

Many Sangh parivar leaders have publicly claimed that the Hindu population is dwindling and the Muslim population rising.

In reply to a question, Bhagwat said it was the government’s responsibility to protect people against discrimination. The Sangh chief said the LGBTQ were a part of society and should not be isolated.